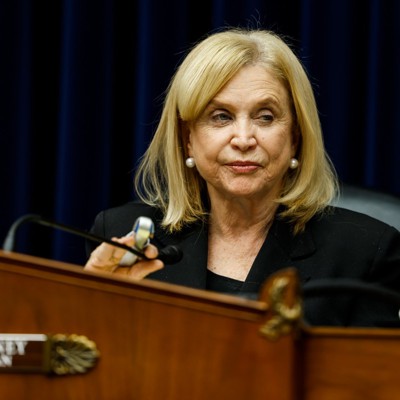 The recently departed Democratic leader of the House oversight committee decried on Wednesday the Republicans’ plans for oversight and investigations in the new Congress, arguing they will not serve the American people.

Former Rep. Carolyn Maloney, D-N.Y., who served as chairwoman of the House Oversight and Reform Committee (now called the House Oversight and Accountability Committee), spoke at an event on Wednesday for Facts First USA, an organization working to “proactively engage and respond to the MAGA-Majority’s abuse of the congressional oversight process by defending and counter punching,” at the National Press Club in Washington, D.C.

“It’s been an interesting two weeks since the Republicans took control of Congress,” Maloney said. In order to become speaker, Rep. Kevin McCarthy, R-Calif., “has ceded the entire congressional Republican agenda to the MAGA extremists who are determined to use their newfound power to wage a war on facts, accountability and democracy.”

As for the oversight agenda, she condemned the addition of “some of the most extreme members of Congress,” such as election deniers, to the House oversight committee as well as the creation of the Select Subcommittee on the Weaponization of the Federal Government, which plans to look into the Justice and Homeland Security departments and FBI as well as other federal agencies.

“When Democrats were in power, we used the oversight committee and investigations to accomplish public good for the American people,” she said, such as leading the charge for Postal Service and civil service reforms (including paid family leave), as well as finding allegedly vast conflicts of interest for consulting firm McKinsey & Company for working with both federal regulators and the drug industry. Meanwhile, “with Republicans they don’t seem to have a purpose except to investigate and destroy.”

Don Goldberg, former staffer on the House committees on Judiciary and Government Operations (which became the oversight committee), who also served as a special assistant to President Clinton as part of his communications team handling investigations, said on a panel during the event that Democratic members and staff on the committees should get involved in the investigations regardless of how “distasteful” they are, to know what the Republicans are looking into, what questions they’re asking and what they’re trying to show.

Additionally, Democrats should try to get rules for their committees enacted that allow them to be present for witness depositions, especially since the new House rules package says agency attorneys aren’t allowed to participate in depositions, he said.

Norm Ornstein, emeritus scholar at the American Enterprise Institute, said on the panel he thinks the Republicans are taking a “decentralized” approach to their investigations, which “may dilute some of the impact of what they’re doing.” Meanwhile, as their goal is to hamstring the Biden administration, such as by trying to bring in officials for testimony and obtaining documents, “that is going to be somewhat effective.”

Rep. James Comer, R-Ky., chair of the House Oversight and Accountability Committee, said last month, and has been expressing for months, “Republicans will return the oversight committee to its primary duty to root out waste, fraud, abuse, and mismanagement in the federal government and hold the Biden administration accountable.” He added, “we will use all tools at our disposal to identify problems and propose solutions that make the federal government more efficient, effective, transparent and accountable to the American people.”

Comer and McCarthy have been talking for a while now about wanting to investigate the situation at the U.S.-Mexico border, the origins of COVID-19, Biden family members and the U.S. withdrawal from Afghanistan, but now there is also a new line of inquiry on the situation involving the classified documents found at President Biden’s Wilmington, Del. house and former office from when he was vice president, which led the attorney general to appoint a special counsel to oversee the matter. Comer has been relentless, through media hits and letters to Biden officials, since CBS News first reported the initial discovery of documents.

Meanwhile, Maloney said, “Biden did everything right” and there is “no comparison” between him and Trump, who is also under a special counsel investigation for potential mishandling of classified documents, after FBI agents had to execute a search warrant at his Mar-a-Lago resort over the summer.

Similarly, White House officials have been stressing that the president’s attorneys handled the matter properly when they found the documents and are complying with the Justice Department probes. “I understand that there is tension between protecting and safeguarding the integrity of an ongoing investigation with providing information publicly,” Ian Sams, special assistant to the president and senior advisor to White House Counsel’s Office, said on a call with reporters on Tuesday. He called what Comer and other Republicans are doing “political theater.”