Authored by Matthrew Vadum via The Epoch Times (emphasis ours),

Former Vice President Dick Cheney has cut an ad for his daughter’s congressional campaign in Wyoming in which he lashed out at fellow Republicans and called former President Donald Trump a “coward” and a “threat” to the nation.

The 60-second campaign ad for the embattled reelection campaign of U.S. Rep. Liz Cheney (R-Wyo.) was posted on YouTube Aug 4. As of press time, it had just over 259,000 views.

“In our nation’s 246-year history, there has never been an individual who is a greater threat to our republic than Donald Trump,” Dick Cheney, 81, says while wearing a white cowboy hat in a close-up camera shot. Cheney served as vice president alongside Republican President George W. Bush from 2001 to 2009.

“He tried to steal the last election using lies and violence to keep himself in power after the voters had rejected him,” Dick Cheney said.

“He is a coward. A real man wouldn’t lie to his supporters. He lost his election and he lost big. I know it, he knows it, and deep down, I think most Republicans know it.”

Cheney said he was “so proud of Liz for standing up for the truth, doing what’s right, honoring her oath to the Constitution when so many in our party are too scared to do so.”

“There is nothing more important she will ever do than lead the effort to make sure Donald Trump is never again near the Oval Office and she will succeed,” he said. His daughter appears at the end of the ad to say she approves of the message.

Liz Cheney has become a lightning rod for criticism in Republican Party circles for her attacks on Trump while serving as vice-chair of the U.S. House select committee investigating the Jan. 6, 2021 security breach at the U.S. Capitol. The breach delayed the congressional certification of the 2020 presidential election by several hours and has been characterized by Trump critics as an insurrection and a coup attempt, a charge Trump and his supporters adamantly deny. Trump supporters have compared the committee’s actions to a witch hunt and a Soviet-era show trial.

Although she traditionally has had a conservative voting record in Congress, Liz Cheney has antagonized Republicans in her home state, where Trump remains popular. She voted to impeach Trump after the security breach and is regularly in the national media spotlight denouncing the former president. The Wyoming Republican Party censured her after the impeachment vote and last fall declared she was no longer a member of the party.

Meanwhile, as the Babylon Bee puts it: 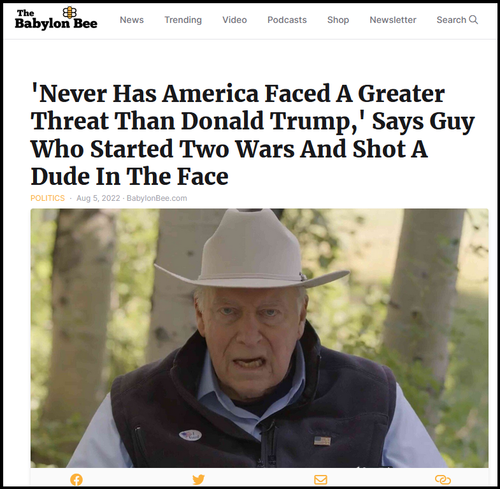 44 mins ago
Kanye West suggests ‘friend’ Trump used him: ‘All Black people are worth is an approval rating’

57 mins ago
Kanye West and Tucker Carlson interview: When is it on and how can I watch?

44 mins ago
Kanye West suggests ‘friend’ Trump used him: ‘All Black people are worth is an approval rating’

57 mins ago
Kanye West and Tucker Carlson interview: When is it on and how can I watch?