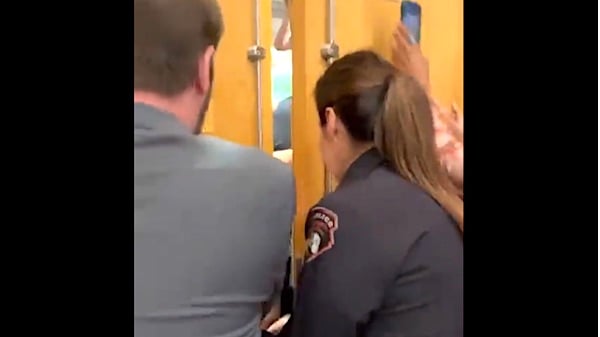 (KRQE) — The fallout continues after a protest at the University of New Mexico over the appearance of a conservative political commentator. Protesters tried to push their way into the SUN Ballroom, while UNM Police tried to keep them out. The scene is getting national attention Friday. Protesters claim their right to free speech was trampled on because police wouldn’t let them into the event.

People there to see FOX News personality Tomi Lahren claimed protesters tried to deprive them of their free speech by crashing the event. There were protesters chanting to shut down the event as they were trying to get through a UNM Police officer stationed outside the ballroom doors. Inside another officer and organizers try to hold the doors closed. New Mexico State Police were eventually called in. Organizers scrapped the speech early due to what they say were safety concerns.

Where is the FBI? I thought they were committed to tracking down and bringing DVEs to justice? pic.twitter.com/Bg3rfQTmjH

Lahren and attendees were escorted out the back early after someone pulled a fire alarm. She spoke on her Instagram afterward. “Not nearly enough officers were present. I don’t think anyone knew it would be this bad,” says Lahren.