Free Speech In The UK?

Authored by Judith Bergman via The Gatestone Institute, 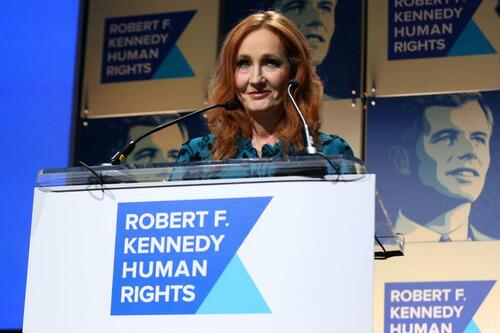 J.K. Rowling, author of the Harry Potter book series, found herself denounced as transphobic. She received not just a storm of social media abuse, but death threats, for saying that biological sex is real and that biological males should not be allowed into women’s spaces simply by declaring themselves to be women. Pictured: Rowling accepts the “Ripple of Hope Award” from Robert F. Kennedy Human Rights, on December 12, 2019 in New York City. (Photo by Bennett Raglin/Getty Images for Robert F. Kennedy Human Rights)

Freedom of speech is doing extremely poorly in the UK, according to a recent YouGov poll. When Britons were asked what should be the priority, 43% said protecting people from offensive or hateful speech should be the priority, while only 38% said the focus should be on protecting free speech. Generally, men and conservative voters were more concerned about protecting free speech, while women, younger people and Labour voters were more concerned about blocking offensive or hateful speech.

The poll also showed that self-censorship is thriving: 57% of those polled said they have “found themselves stopping themselves from expressing their political or social views for fear of judgement or negative responses from others.” According to the poll:

“In most cases, those holding what might be considered the ‘un-progressive’ view more frequently omit their opinions on that topic. For example, those who believe immigration has generally been a bad thing for the UK… those who disagree with the statement ‘a transgender woman is a woman’ feel they have to frequently keep bottled up.”

Recent years have offered many examples of the dire conditions of suppressed free speech in the UK. Opinions that a person’s biological sex takes precedence over “gender identity” — that identifying as a woman is not the same as being born a woman, or that transgender men competing against women in sports creates an unfair playing field — provoke some of the fiercest backlash.

Professor Kathleen Stock, for instance, from Sussex University, ended up resigning after being denounced as “transphobic” by students and receiving death threats for her views on transgenderism. According to one report:

Stock criticized the idea that “One aspect in particular that baffled her was the claim that a person’s belief about their psychological identity, whether they are male or female, is more important than their material sex at birth — not least due to the impact such categories have on medicine, sport, science, education and more.”

Stock decided to resign from her position after her own lecturer’s union sent a letter urging the university’s management to “take a clear and strong stance against transphobia at Sussex.”

Jo Phoenix, a professor of criminology at the Open University, resigned from her position in December after receiving abuse from colleagues and the university. She had, among other problematic matters, spoken out about “the silencing of academic debate on trans issues” as well as pointing out the problems of housing transgender women in women’s prisons.

J.K. Rowling, author of the Harry Potter book series, also found herself denounced as transphobic. She received not just a storm of social media abuse, but death threats, for saying that biological sex is real and that biological males should not be allowed into women’s spaces simply by declaring themselves to be women. In response to the attacks on her, she tweeted:

“If sex isn’t real, there’s no same-sex attraction. If sex isn’t real, the lived reality of women globally is erased. I know and love trans people, but erasing the concept of sex removes the ability of many to meaningfully discuss their lives. It isn’t hate to speak the truth.”

As a reported consequence, Rowling had her name removed from a primary school, because Rowling’s “views on this issue do not align with our school policy and school beliefs – a place where people are free to be,” according to the BBC. But not, apparently, to speak.

Gillian Philip, a Scottish author of children’s books, was dropped by her publisher for posting the hashtag ‘#IStandWithJKRowling’ on Twitter. In a column for the Daily Mail, she wrote:

“I’m not remotely transphobic, but the idea that a man can simply declare himself to be a woman, fully intact, without surgery or hormones, and be allowed into women’s prisons or hospital wards is a crazy situation that I sometimes want to shout about.”

Rosie Kay, a leading choreographer, resigned from the dance company she founded in 2004, after she was accused of being transphobic, following remarks she made at a private dinner she hosted for the dancers in her company. Kay had said that “women are losing rights to males who identify as women, including rights to single sex spaces”. She left after complaints made by the dancers about her remarks, and said they led to an “unfair, opaque and horrific investigation process that’s still ongoing”. According to Kay:

“This was a dinner in my own home, at which I was attacked by six individuals. The hostility was directed at me, and has lasted for nearly four months. I make no apology for standing up against this treatment… This is not aimed at the dancers, but at the toxic nature of a culture that will see women lose their livelihoods for believing that sex is real.”

Jess de Wahls, an embroidery artist, had her work withdrawn from the gift shop of the Royal Academy of Arts (RA) in June 2021, after complaints about a blog she had written in 2019. She had noted that a woman is “an adult human female” and “not an identity or feeling”. The Royal Academy published a statement declaring:

“The RA is committed to Equality, Diversity and Inclusion and does not knowingly support artists who act in conflict with these values. We would like to reiterate that we stand with the LGBTQ+ community.”

“Eight people had complained,” de Wahls told the Telegraph, “It was ridiculous. The RA told me they stood with the LGBTQ community and I said, ‘So do I.’ I told them it was insane to call me a ‘transphobe’ just because I understand biological science.”

“Cancel culture, this cancelling, this punishment, it’s everywhere,” said Dame Maureen Lipman, an actress and comedian, about the world of comedy. She expressed her concern that it is in danger of being “wiped out” because “comedians are scared that audiences will take offence, and… they self-censor their material as a precaution… It’s in the balance, whether we’re ever going to be funny again.”

“Earlier this month, both Jack Whitehall and David Baddiel warned about the perils of ‘cancel culture’. One comedian has made his name on the back of deprecating his own privileged background; the other made his in the 1990s as a right-on, anti-racist favourite among us teens and students – when students were funny…. comedy is under threat by this new orthodoxy. This is no joke.”

Journalist and author Peter Hitchens wrote in his column for the Daily Mail, on December 11, 2021:

“Free speech is already dead in Britain. It is just that the chattering classes have not realised it yet. There is still a very limited liberty to say a few nonconformist things in some newspapers and magazines, and perhaps in some universities and schools…for most people, true free speech has ceased to exist. Step outside the borders of acceptable thought in a school or a workplace and you can very quickly find yourself being denounced and in serious trouble. On some issues, such as the transgender controversy, it is virtually impossible to say anything without attracting the attention of the Thought Police.

“They also view my doubts about the theory of man-made global warming as ‘denial’ of a fact which they regard as proven. To them, this is little short of sabotage of efforts to combat this peril.

“Among millions, the idea that you can defend someone’s right to say something you disagree with is now puzzling. They have no idea why anyone would do that. For them, the debate is over, they have won, and those who oppose them are stupid and wrong… All of them believed that they owned the truth, that they were profoundly good and that those who got in their way were therefore evil as well as wrong.”