A few months ago, Michael Novogratz – self-described “Forrest Gump of Bitcoin” – was taking a selfie outside a tattoo parlor in Brooklyn – and, as usual, tweeting all about it. Novogratz was eager to show off his new ink: A wolf howling at the moon, along with the word “Luna” – a nod to the then hot, now not cryptocurrency…

Since January, things have gone just a little bit turbo for Luna (and TerraUSD, its stablecoin) as both have seen their values have been eviscerated to practically zero.

As the currency hyperinflated into collapse, Bloomberg reported that Novogratz, a prolific crypto promoter on Twitter, went conspicuously silent.

After tweeting 60 times in January, more than 50 times in both February and March, nearly 30 times in April and roughly once a day during the first week of May – nothing.

On May 9, after TerraUSD lost its peg to the dollar, Novogratz said on Galaxy’s earning call that he expected the cryptocurrency market to be “volatile and difficult” and acknowledged that so called algorithmic stablecoins were set for a “really big test.” 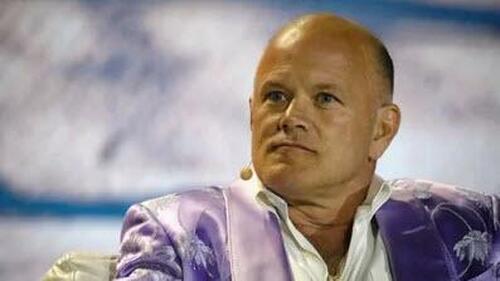 Until now, as the former Fortress macro trader took to Twitter again to explain himself

After much thought, it’s time to talk about last week and, more importantly, the weeks ahead. https://t.co/m2pnzpe9Lu

To our shareholders, friends, partners, and the crypto community,

I have spent the past week reflecting on the economy and macro markets, our industry, and Galaxy’s place in it.

There is no good news in what happened in markets or to the Terra ecosystem. In Luna and UST alone, $40bn of market value was destroyed in a very short amount of time. Both large and small investors saw profits and wealth vanish. The collapse dented confidence in crypto and DeFi. Whenever money is lost in such an abrupt fashion, people want answers. I am going to try to add some insights to the ongoing discussion.

First, what is important to know is that crypto is open source. Information about most protocols is transparent and auditable in real-time. Crypto has always been about the free exchange of ideas—with unencumbered access to data and real-time information. What’s important to understand about Terra/Luna is that the mechanism that was intended to keep UST stable was public, transparent, and hotly debated in many forums. UST was an attempt at creating an algorithmic stable coin that would live in a digital world. It was a big idea that failed.

Our principal investments team invested in Luna in Q4 of 2020 using balance sheet capital. Our team’s initial thesis for investing in Luna was centered around the expansion of blockchainnative payments systems. At the time, we understood that the Chai app, which was built on Terra, had more than 1.8m users and was a top 5 finance app in South Korea that we considered had significant growth potential.

We were intrigued by this project as an example of crypto finding a real-world use case. Since we made that initial investment in 2020, the ecosystem evolved significantly. When we make investments in ecosystems, we look for a driven founding team with a unique idea and follow the usage of that project. Among other things, we analyze developer engagement, investor support, and network activity. Terra, the underlying blockchain, had hundreds of projects being built on it and a world class list of investors. The initial idea was gaining serious traction.

To start, the global macro backdrop has been brutal for all risk assets this year.

Central bankers are in the early stages of unwinding a massive liquidity bubble – fueled by unprecedented fiscal and monetary policy injections into economies across the globe, including in the US – that had propped up all risk assets, including crypto. The “free money forever” ethos of the last decade has left us staring in the face of the biggest bout of inflation since the 70s. Many assets that had meteoric rises in the period since Covid have suffered meaningful and correlated corrections.

This macro backdrop put pressure on Luna and the reserves held to back UST. UST’s growth had exploded from the 18% yield offered in the Anchor protocol, which eventually overwhelmed other uses of the Terra blockchain. The downward pressure on reserve assets coupled with UST withdrawals, triggered a stress scenario akin to a “run on the bank.” The reserves weren’t enough to prevent UST’s collapse. With hindsight things always look clearer. My tattoo will be a constant reminder that venture investing requires humility.

2. take profits along the way,

3. have a risk management framework, and

4. understand that all investments happen in a macro framework.

Galaxy did all of these with regards to our investment in LUNA.

Reading the stories of retail investors who lost their savings in one investment is heartwrenching. A core tenet in the crypto belief system is equal access to markets. But it’s important that less experienced market participants only risk what they are comfortable losing. I’ve often said people should allocate 1%-5% of their assets to the space.

At a high level, it’s important to understand that volatility is likely to continue, and the macro situation is going to remain challenging. There is no cavalry coming to drive a V-shaped recovery. The Fed can’t “save” the market until inflation falls. So, liquidity is important. Being realistic is important.

What does this all mean for the future of crypto?

Crypto is not going away. The amount of human capital moving into the space isn’t slowing down. The focus on building decentralized infrastructure that allows value and ownership to flow as freely as information on the internet, isn’t slowing down. The GDP of the metaverse is heading one way. Our community is resilient, has a shared belief in a new way of doing things, and the assurance that this is the very early innings.

This does not mean the crypto market will bottom and head straight back up. It will take restructuring, a redemption cycle, consolidation, and renewed confidence in crypto. Crypto moves in cycles, and we just witnessed a big one.

With our diversified business lines, Galaxy remains in a strong capital and liquidity position. We are well-positioned for long-term growth. Last week we provided a public update on our liquidity, capital, and operating performance through May 11, including confirmation that Galaxy’s Treasury does not utilize algorithmic stable coins. As always, Galaxy will continue to manage its balance sheet appropriately with respect to the macroeconomic backdrop. Galaxy continues to believe in the growth of this industry and our platform.

Most importantly, Galaxy and I are wholly focused on continuing to support the crypto ecosystem because the need for innovation that democratizes access to ownership and enhances trust and transparency is greater than ever.

The crypto community—and Galaxy’s—mission isn’t changing. I firmly believe now more than ever that the crypto revolution is here to stay. Together, we’ll weather this storm and come out stronger on the other side.