Robinhood’s recent IPO was initially lackluster, with the stock trading down ~7% from its IPO price. In recent days the stock then started to catch a bid as Cathie Wood & ARK bought in. However yesterday HOOD stock launched over 50%…but why? Options. 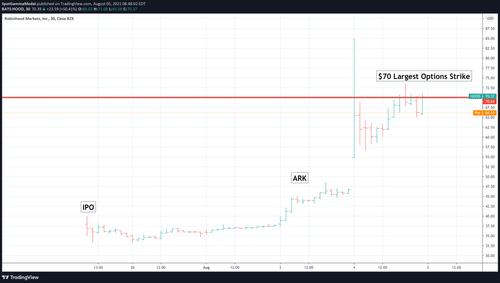 Yesterday was the first day that options trading was available in HOOD, with strikes prices available up to $70.

Below we’ve plotted out the options activity as a function of delta. By viewing the delta of the options trading, we can estimate the amount of hedging exposure these trades generated. If the options generated large positive deltas that is telling us two things:

As you can see below, right after the market opened there was a surge in positive delta activity (green line) which is likely call buying. In effect there was a gamma squeeze right at the open. This in turn pushed the stock price to an initial high near $80 (red arrow). Shortly after the stock reverted strongly as options flows turned bearish – traders bought puts and sold calls (blue arrow).

Notice that after the blue arrow the options delta stays flat. This suggests that options trading was directionally neutral, and remained that way up until ~2PM EST. At that point the options flow turned quite bullish (green arrow), which coincided with the stock pinning the $70 strike. 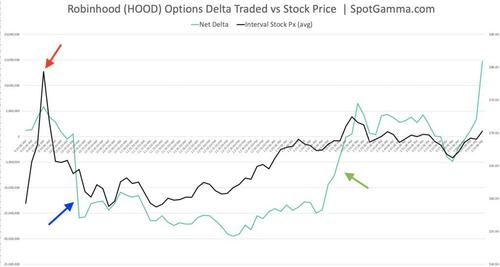 As noted above, $70 was the highest available strike for options yesterday. Our EquityHub data shows that is exactly where most traders now hold the bulk of call positions, and the strike which SpotGamma considers the key options strike for today. Given this, we think its no coincidence that the stock closed right at $70 last night (If you want to keep track of the latest options positioning, you can start a free trial of SG Pro, here).

Today the exchanges have now listed options strikes up to $170, which gives traders a whole new set of calls to purchase. This may setup a further gamma squeeze in HOOD as traders push into these higher strike calls. We think retail traders in particular are attracted to these higher strikes as they generally cost less (from a premium perspective) making them more accessible to traders with smaller assets.

For a gamma squeeze to continue we want to see the stock trade over $70, with today’s call volumes in the order of several hundred thousand. That volume needs to show particularly at strikes in the $75-100 range. This should keep the pressure on dealers to buy the stock which could keep the gamma squeeze in motion. If the stock cannot hold $70, then dealers may be able to start an unwind of their long stock hedges, which could pressure the stock back lower.

The other factor here is time. The bulk of the current options position does not expire until 8/20, which means that the decay of those call positions is a bit slower than we may see in typical gamma squeezes. Most often traders pile into the weekly expirations, with only ~5 days to expiration. We’ve documented this phenomenon here. The fact that there is more time to expiration on these RobinHood calls could work to the benefit of bullish traders.