U.S. oil refining margins, also known as the 3-2-1 crack spread, jumped to a three-month high on Tuesday — and that’s an indication the country faces an ongoing product shortage that might lead to higher gasoline and diesel prices at the pump.

The 3-2-1 crack spread is a great indicator to gauge fuel product tightness. High spreads indicate gasoline, diesel, jet fuel, and other petroleum products are in short supply, while low spreads mean an abundance of supply. Spread direction is also important — if rising, it would mean fuel inventories are declining.

The simple calculation of refining margins is for every three barrels of crude oil the refinery processes — it makes two barrels of gasoline and one barrel of distillates like diesel and jet fuel.

On Tuesday, the crack spread hit a three-month high of $42 a barrel. For some context, the five-year January average is $15.56. 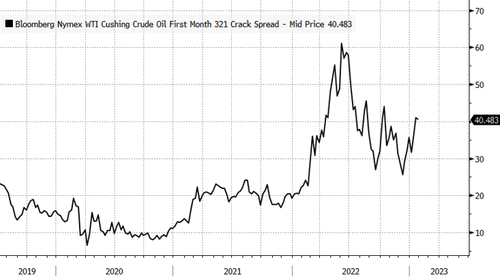 A diesel producing unit at PBF Energy’s (PBF.N) Chalmette, Louisiana, refinery was shut following a fire on Saturday. It could be out for at least a month. Exxon Mobil (XOM.N) said Monday it will perform planned maintenance on several units at its Baytown, Texas, petrochemical complex.

The ongoing refinery maintenance season could be much lengthier than usual, with many U.S. Gulf Coast refineries still running below capacity after Winter Storm Elliott knocked out some 1.5 million barrels per day of refining capacity in December. A Suncor refinery in Commerce City, Colorado, has remained offline since the storm.

Also, the number of refinery overhauls is double the amount this spring. Many of these overhauls were postponed due to the pandemic. Some are due to record-high margins driving increased profitability for oil companies.

There are at least 15 oil refineries plan maintenance ranging from two to 11 weeks through May, tallies by Reuters and refining intelligence firm IIR Energy show. By mid-February, U.S. refiners will drop some 1.4 million barrels per day of processing capacity, double the five-year average.

“A lot of plants didn’t want to shut down last year when margins were strong, but they have to get this work done,” said John Auers, refining analyst with Refined Fuels Analytics.

Nine U.S. refineries operated by Marathon Petroleum, Valero Energy, Exxon Mobil, Phillips 66, and BP will shutter some of their fuel-producing units this spring, according to IIR and Reuters sources.

All of the outages and planned overhauls are going to make it difficult for refiners to catch up with demand as inventories are relative to historical levels.

“If we aren’t hearing the alarm bells, it’s because we’re deaf after refining margins reached eye-watering levels in 2022, when the 3-2-1 crack spread briefly surged above $60. But from a historical perspective, current margins are sky-high, as well,” Bloomberg Opinion’s Javier Blas said.

According to AAA data, gasoline and diesel prices at the pump are starting to move higher after months of declines following the rise in the 3:2:1 crack spread. 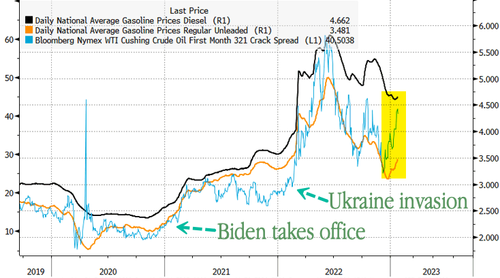 And the ‘raw materials’ for the refining process are rising rapidly… 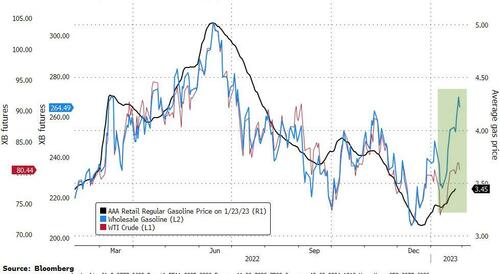 Perhaps the victory lap was a little premature?

Since June, the average gas price has fallen by $1.60 – saving American families with two cars $170 a month.