Authored by Rick Rozoff via AntiWar.com,

Zurabishvili first came to world notice when she emerged as part of the triumvirate that took over in Georgia following the so-called Rose Revolution in late 2003 that saw incumbent head of state Eduard Shevardnadze manhandled and divested of his powers. Her colleagues were Mikheil Saakashvili, who became president, and Zurab Zhvania, whose family claims he was assassinated in 2005. That event is the prototype of what have come to be called color revolutions; after Georgia the Orange Revolution in Ukraine in 2004, the Tulip Revolution in Kyrgyzstan and the Cedar Revolution in Lebanon in 2005, and a veritable host of others, successful and otherwise, in Belarus, Moldova, Armenia, the Maldives, Venezuela, Myanmar, Iran and elsewhere. 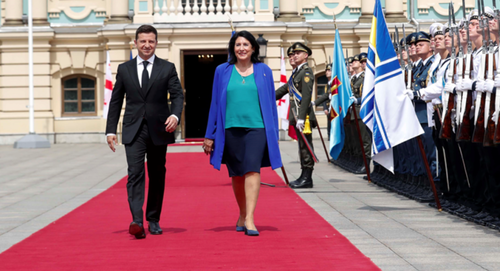 Deposed president Shevardnadze accused George Soros and his “philanthropies” of funding the coup in his nation. Shortly after Saakashvili and his allies came to power Soros’ Open Society Institute partnered with the United Nations Development Program to create a Capacity Building Fund for Georgia. The initiative was announced at a joint news conference with Saakashvili, the then-United Nations Development Program administrator and Soros at the World Economic Forum that year. Over 5,000 Georgian officials were paid out of the fund.

Later that same year the Orange Revolution occurred in Ukraine and a similar triumvirate, two men and a woman (it would be the same in Kyrgyzstan in 2005), took power.

The West, especially NATO, has always treated the two Black Sea nations as a pair. The military bloc created a NATO-Georgia Commission and a NATO-Ukraine Commission in 2008; each has been granted an Annual National Programme in those formats.

Last year they were among the first nations to become NATO Enhanced Opportunities Partners.

This week Ukraine’s Zelensky praised the strategic relations between the nations, affirming they shared a joint commitment to joining NATO and the European Union. He added they “agree regarding the future development of the Eastern Partnership,” whose association agreement demand on now deposed President Viktor Yanukovych led to the coup in 2014 and the resultant war in the Donbass. The Eastern Partnership, originally devised by Poland and Sweden, has as it mission the absorption of all remaining European and Caucasian former Soviet states into the European Union (and NATO) – except Russia.

“The UK should seek to incorporate the Black Sea region as a geostrategic priority. This must include joint maritime patrols with Ukrainian & NATO allies”

The Ukrainian head of state also spoke of strengthening military integration in the Black Sea – against Russia, of course – particularly in regard to the Ukrainian and Georgian navies.

President Zurabishvili stated it was disappointing that the two nations “lost some time that should have been used to deepen relations,” in reference to a two-year freeze in relations after Zelensky appointed former Georgian President Saakashvili (on the run from his homeland) the chairperson of Ukraine’s Executive Reform Committee. As often occurs in such cases, Zurabishvili and Saakashvili, once coup co-plotters, soon became bitter enemies. (If she could have his head on a platter she would gleefully live up to her name.)

She, like her Ukrainian counterpart, hailed a common commitment to NATO, the EU and de-occupation, by which she evidently meant “liberating,” respectively, Abkhazia and South Ossetia and Crimea and the Donbass from Russia. The Georgian president also denounced “daily provocations” from Russia “along the occupation line.”

Zelensky expressed confidence that Georgia would assist his government’s de-occupation of Crimea by appointing a representative for this year’s Crimean Platform founding summit, whose purpose is to wrest Crimea from Russia. 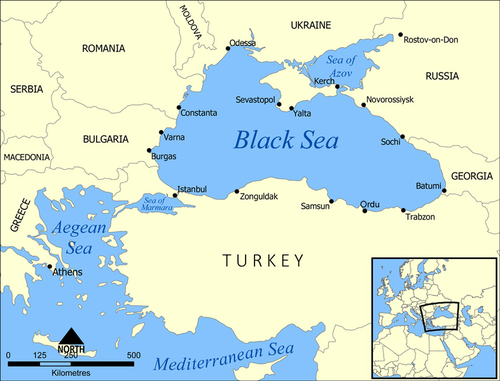 It’s no wonder that some NATO members are less than enthusiastic about bringing Georgia and Ukraine into their fold and providing them with Article 5 protection. Doing so in the context of “de-occupying” territory in the Donbass, the Caucasus and especially in Crimea would almost certainly provoke a military confrontation with Russia that wouldn’t remain a conventional one for long.