German Vice-Chancellor and Economy Minister Robert Habeck spoke with Der Spiegel magazine about the need for German citizens to shower less to overcome the worst energy crisis in a generation.

When asked by Der Spiegel about “saving energy in our day-to-day lives,” Habeck responded by saying to shower less.

“I have drastically reduced the amount of time I spend in the shower, but I am a poor example. As a minister, I earn a salary that others can only dream of. Plus, I come home late, get up at 6 a.m., and am out of the house again by 7. With such a schedule, it’s not necessary to heat in winter. For people working from home, retirees with small pensions, and families, it is a different story.

“My counterpart from the Netherlands recently told me proudly that they had launched a campaign intended to cut the average showering time from 10 minutes to five. I had to laugh. I have never showered for five minutes in my life. I shower quickly,” he said.

In another question about his energy savings campaign, the minister said, “We don’t have to completely punish ourselves. But we also can’t act as though everything is just fine.” 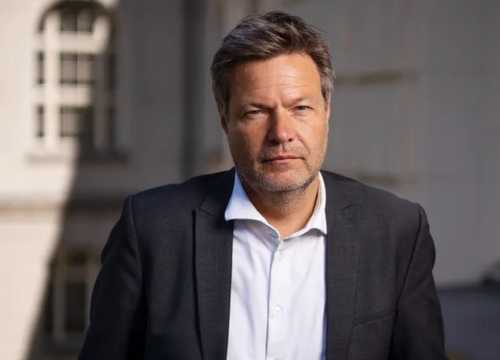 Habeck’s conversation with the German magazine comes a day after he warned Germany should prepare for further import cuts of Russian natural gas. Germany raised its NatGas-emergency plan to the second “alarm stage” of a three-stage emergency plan that allows utility companies to pass on higher power prices to industry and households to curb demand. The move comes as the Nord Stream pipeline to Germany operates at 40% of capacity after flows were recently reduced for a “technical problem” by Russian gas exporter Gazprom PJSC.

The second stage also increases energy market monitoring and allows some coal-fired plants to be reactivated to increase electricity output.

There are new fears Saturday morning that Moscow could entirely halt all NatGas flowing through Nord Stream within weeks, which would cause energy chaos in Germany and across the continent.

Describing the worst-case scenario [shuttering of Nord Stream] to Der Spiegel, Habeck said, “companies [will] have to cease their production, their workers [will] be laid off, supply chains will be collapsing; people are going to [go] into debt to pay their heating bills; people will be getting poorer and frustration will engulf the nation.”

In an interview last week, the International Energy Agency told the Financial Times that Europe should be prepared for a complete suspension of Russian NatGas flows to Europe.

No matter if everyone in Germany stopped taking showers at the request of the government to save energy, the largest European economy and the entire continent faces a severe energy crunch as Putin could any day pull the plug on NatGas flows that would trigger an economic collapse. CEO of Germany’s multinational BASF SE, the world’s largest chemical producer, warned of that in April.

Meanwhile, Europe was hoping for increasing LNG exports from the US, but the Freeport LNG terminal in Texas recently experienced an explosion that has complicated the export picture that and won’t return online until late 2022.