For once there was some good news for Angela Merkel’s CDU in the twilight of her political career, in a time when Germany’s legacy political parties are suffering from vast losses of popularity.

On Sunday, Germany held an election in the state of Saxony-Anhalt where Angela Merkel’s Christian Democrats were most likely to win in and fend off AfD. According to projections from public broadcaster ARD, the CDU is on course to win 36.9%, a vast improvement over the 30% it received in 2016 in the state, while the far-right AfD, which was pushing for the lead in recent polls, slumped to a distant second with 22% (24% five years ago) in the former communist region. 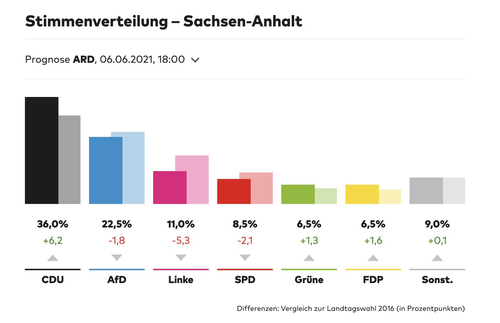 The Greens and Liberals (FDP) recorded minor gains, whereas in addition to AfD, the Left Party and SPD also suffered significant losses.

This was the final electoral contest before the national vote in September and will be a boost to the CDU’s Armin Laschet as he bids to succeed Merkel in the Chancellorship, because as Bloomberg notes, the result “showed he can successfully guide the Christian Democrats in a tight campaign. The outcome will help ease doubts about his suitability to lead Germany’s conservatives.”

“The national CDU under Armin Laschet now has the momentum on its side,” said Holger Schmieding, the London-based chief economist at Berenberg. “The concern that Laschet maybe a hindrance rather than a help should be deflated.”

In the run-up to the election, Laschet appealed to the state’s mainstream voters to back the CDU, saying it was important to defend democracy from the right-wing nationalist party. It was enough to gain a significant edge in Germany’s unsettled political landscape as the Merkel era draws to a close.

As Goldman notes in its post-mortem, although pundits see limited read-through to the September federal elections, “the strong showing of the CDU is likely to bolster the party’s momentum at the federal level. The results also show that despite its persistent inroads into Saxony-Anhalt’s voter base, a large majority still opposes the right-wing brand of identity politics championed by the AfD.”

Some more points from Goldman: 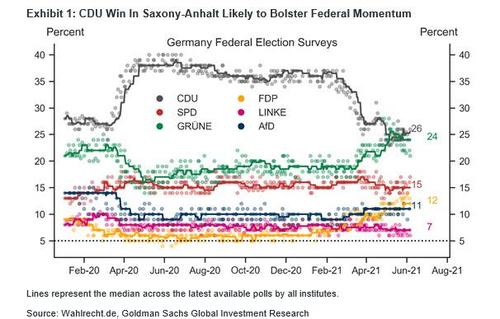 As a reminder,  Laschet became the leader of Merkel’s CDU in January and stumbled out of the gate with the party suffering its worst-ever results in Baden-Wuerttemberg and Rhineland-Palatinate in March. That setup an ugly power struggle with Bavarian ally Markus Soeder for the right to be the bloc’s candidate for chancellor. While Laschet prevailed, he emerged bruised.

However, after Sunday’s remarkable reecovery by the CDU, Laschet can turn with renewed confidence to tackling the Greens and their candidate Annalena Baerbock, his main rival to lead Europe’s largest economy.

Separately, the environmental party’s momentum has stalled in recent weeks, and the trend was underscored by a smaller-than-expected gain in Saxony-Anhalt, which could cost the party its role in the state’s government. “We gained but not as much as we’d hoped,” the 40-year-old co-leader of the Greens said on ARD.

Germany’s political establishment, meanwhile, can breathe a sigh of relief. A victory by the AfD would have been the right-wing party’s first on the state level, triggering complex political maneuvering to keep them out of the regional government. Instead, as Bloomberg notes, Instead, Reiner Haseloff, the CDU’s state premier, has a range of choices to form a coalition for his third term. His current government consists of a three-way alliance with the Social Democrats and the Greens. He could replace the Greens with the pro-business FDP, which has also been gaining support nationally.