A tsunami of bankruptcies could batter Europe’s largest manufacturing hub as stagflation risks mount due to the conflict in Ukraine and resulting Western sanctions on Russian fossil fuels.

“The energy supply in Germany is at risk, supply chains are breaking down, we have high inflation,” said Commerzbank Chief Executive Officer Manfred Knof, who German newspaper Handelsblatt recently quoted.

The threat of stagflation in Germany is elevated as soaring energy prices increase inflation and wreak havoc on businesses. Germany could experience a downturn if an embargo on Russian fossil fuels, such as natural gas, crude, and coal, is enforced.

Bundesbank warned in late April that in a “severe crisis scenario, real GDP in the current year would fall by almost 2% compared to 2021,” and the “inflation rate would be significantly higher for a longer period of time” following an embargo. This economic environment is otherwise known as stagflation. 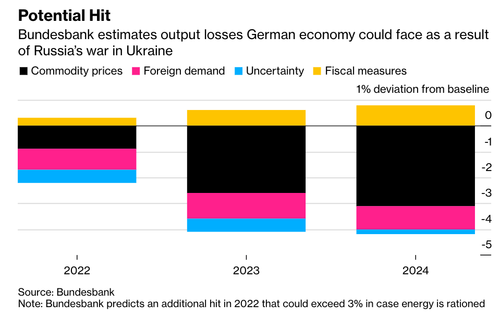 Last week, EU officials discussed a potential fossil fuels embargo on Russia. The eurozone is searching for alternative suppliers of both crude oil and natgas to wean itself off Russian energy. A ban on Russian coal is scheduled to come into effect in August.

However, replacing one form of fossil fuel dependence with another has caused economic turmoil. It could deliver a devastating shock to German businesses.

“We shouldn’t delude ourselves: the number of insolvencies in our markets will probably increase and the risk provisions of the banks with it.”

Confidence in Germany’s economy rapidly diminished as industrial production dropped more than expected in March. For the eurozone, inflation hit a record high of 7.5% for that month.

An immediate embargo on imports from Russia would generate an economic shock that could quickly unravel Germany’s economy. Stefan Hartung, CEO of German engineering and technology giant Bosch, told CNBC Friday that a “big recession is in the making.”

It could only be a matter of time before Germany revolts against Brussels’ decision to end Russian fossil fuel shipments to the eurozone because it must save itself from economic demise.