The “traffic light” framework agreement struck Friday between the Social Democrats, Greens and the Free Democratic Party – the three parties that will form Germany’s first post-Angela Merkel government – has come together more quickly than many Germans probably expected.

After just a week of talks, the three parties unveiled the 12-page framework during a Friday press briefing. While it’s certainly progress, the framework is still very thin and negotiators from all three parties will likely take months to fill in the gaps.

By announcing the deal, German Finance Minister Olaf Scholz took another step toward succeeding Angela Merkel as Germany’s next chancellor. During all of Germany’s post-WWII history, a coalition deal has never collapsed after reaching this stage. Scholz, the SPD leader and likely the next Chancellor, has insisted that his vision for a “progressive” Germany can be realized even if the Greens and the FDP aren’t exactly ideological bedfellows.

The framework focuses on issues like climate change, taxes (namely, a commitment not to increase them), simplifying immigration processes as well as a new agreement on the minimum wage, among other commitments. The three parties have been holding talks since Scholz’s center-left SPD took home a plurality of the vote during Germany’s federal election. 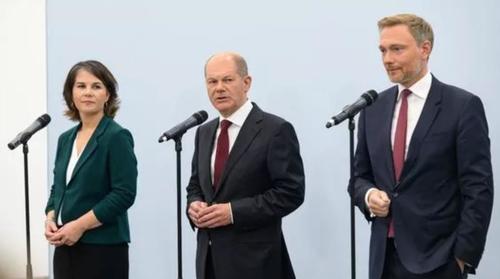 Now, over the next two months, the three parties policy experts must fill in the many gaps left in the 12-page deal. The full coalition deal between Angela Merkel’s conservatives and the SPD ran to 175 pages and included specific commitments on legislation to be enacted in the Bundestag.

Scholz said Friday that he hoped to have the whole policy framework finished and the government formed by Christmas. While most Germans probably remember the collapse of Merkel-led three-way talks back in 2017 (which collapsed before a framework was even close to being agreed to), modern Germany hasn’t seen a coalition fall apart after the parties agreed on a framework. If talks did collapse, President Frank-Walter Steinmeier would have to step in, but this would be uncharted territory. Like in Italy, Germany has a president whose role is more akin to that of a caretaker when coalition talks fail.

Speaking to reporters, Scholz said Friday that the preliminary agreement “clearly shows that a government that aims to ensure we achieve progress can be formed in Germany.”

“This is a very good result,” he added. “It makes clear that Germany can form a government that can achieve progress, progress that’s possible and necessary in many, many areas.”

Scholz also claimed the parties managed to bridge their differences to put Germany on the path to its biggest industrial renewal in a century.

Already, there appear to be areas where conflict could possibly arise. While the framework has included a commitment not to raise taxes, both the Greens and SPD have sketched out spending commitments as part of their promise to create a more egalitarian society. As it stands, the deal promises a “decade of investments in the future” while leaving in place Germany’s infamous debt brake enshrined in the German constitution.

As for relations with the EU, views among the three coalition partners differ substantially. The FDP still opposes the EU debt union that many in the Greens and the SPD are keen on. The Greens also favor a common EU fiscal policy to support investment in the environment, research, infrastructure and education. Of course, this would be anathema to Europe’s far-right, as any indication of a unified fiscal policy framework to compliment the supranational ECB would infuriate many on the right.

On China, Biden (or, potentially, Trump should he return to office) might find an ally in the new German government, since the Greens and the FDP are more wary of China than the SPD or Merkel’s conservatives. The framework includes an agreement that Chinese firms should have no part in the construction of Germany’s next-generation telecoms networks to keep them secure. Notably, the Greens abandoned their push to impose a new speed limit on the Autobahn

When it comes to energy, the deal requires Germany to search for more alternatives to fossil fuels. The Greens have been pushing to scrap the Nord Stream 2 pipeline, which will transport Russian gas to western Europe and increase Germany’s reliance on Moscow for energy, and on the fossil fuels that the Greens claim are more damaging to the environment. Oddly, this is one situation where environmentalists will find themselves allied with Sen. Ted Cruz who has also warned against the pipeline.

Certain commitments are more vague than others. When it comes to defense spending, the Greens are the only party that opposes increasing it to the 2% of GDP that all NATO members have promised. The framework included some vague language about abiding by its commitments, but it’s not clear how all this will pan out.

The only thing that looks certain at this point is that Merkel’s longstanding conservative coalition, the CDU-CSU, is heading for the opposition benches after the CDU’s worst electoral performance in decades.