The river at Kaub, Germany, is around 21.6 inches (55 centimeters) on Thursday and is expected to drop to 18.5 inches (47 centimeters) by Saturday, according to the German Federal Waterways and Shipping Administration. Currently, Europe’s most crucial waterway is 5.9 inches (15 centimeters) from being impassible, the threshold where barge traffic is 15.7 inches (40 centimeters). 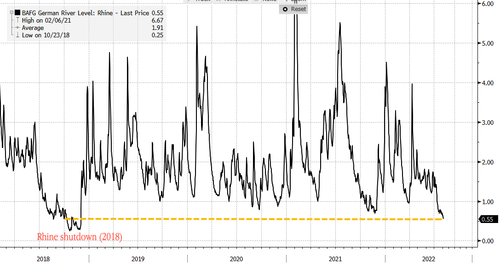 Uniper said the low water levels could force “irregular operation” at its 510-megawatt Staudinger-5 coal-fired power plant through the first half of September because fewer and fewer barges have been able to deliver coal as stockpiles dwindle. Rhine water levels below 40 centimeters at Kaub would halt shipments via inland waterways to the power plant, forcing shipments by land.

On Wednesday, Riverlake, a vessel broker, said, “fewer and fewer barges can pass through Kaub.”

Meanwhile, German power for next year soared to a record intraday high of 410.57 euros per megawatt-hour on the European Energy Exchange on Thursday on the prospects of a worsening energy crisis. 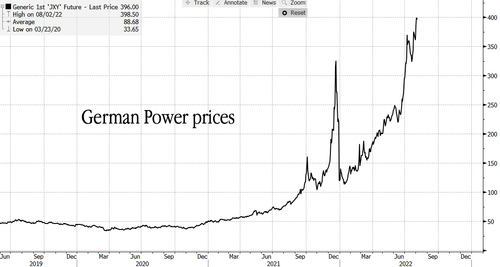 Besides Uniper, here’s what other German companies are saying about low water levels on the Rhine and how they seek alternatives for transporting goods (list courtesy of Bloomberg):