As if relentless, fiscally-stimulated global demand for (made in China) products, coupled with soaring input prices, Covid-crippled indutries, production-throttling energy crises and containership parking lots off major ports wasn’t enough to cripple global supply chains, we can throw in one more factor that will make “just in time” deliveries a thing of the pre-Biden past and will ensure that nobody gets their presents this Christmas.

A tropical storm that’s lashing southern China is causing a ship backlog from Shenzhen to Singapore, Bloomberg reports as it warn of even emptier store shelves come Christmas.

For once there is no “unintended consequence” behind this pile up – it’s the result of Typhoon Kompasu freezing transit lanes, closing schools in Hong Kong and canceling stock market trading in the financial hub on Wednesday. It also sparked the latest containership domino-effect at the worst possible time, with 37 ships now waiting off Singapore, 18% more congested than normal. And with Singapore one of the most efficient ports in the world and a key hub for containers to be moved from one vessel to another while in transit, any disruption in the city-state is bound to have far-reaching ramifications. 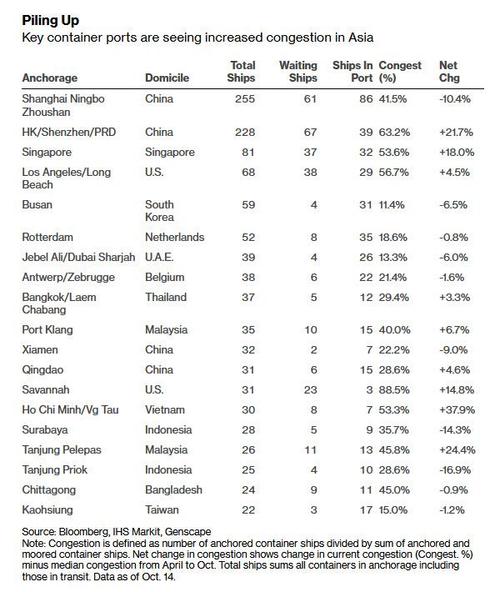 The incremental delays will make an already fragile supply chain, that much more unstable: according to the Busan Port Authority in South Korea, vessels are having to wait about three days to berth and that’s causing so-called transshipment cargo to pile up. Meanwhile, almost 40 ships are anchored off Los Angeles, 4.5% more congested than usual, while 11 are cooling their heels off the coast of Malaysia at Tanjung Pelepas, creating a congestion rate about 25% above the median. For Vietnam’s dual hub of Ho Chi Minh City and Vung Tau, things are even worse, with current congestion 38% higher than the median.

Operators are scrambling to find a solution to this chaos which seems to get worse with every passing day: “shipping companies and other stakeholders are trying to resolve the backlog because there are real concerns that many year-end holiday goods will never reach consumers in time,” said Um Kyung-a, an analyst at Shinyoung Securities in Seoul. “This month will be the most challenging period but hopefully things will start to ease from the fourth quarter.”

This is a “hopeful” line we have heard every month since May. It has yet to come true.

Located at the gateway – both literal and metaphorical – of global Transpacific supply chains, accessible port terminals are an indispensable anchor to any hopes of normalizing supply chains. Alas, congestion at container terminals around the world has added pressure to already stretched supply chains. Covid-19 cases at ports, along with shortages of shipping containers and labor have aggravated the problem as exporters try to send goods to the U.S. and Europe before the end of the year.

According to Singapore Logistics Association chairman Dave Ng, vessels are waiting one to three days to berth at most major ports in Southeast Asia, including Singapore, The wait is more than three days at major ports in Northeast Asia and could extend to over a week in other parts of the world. And any incremental delays only cascade exponentially, adding more days to an already broken system.

“Global port congestion has introduced more uncertainty into planning and booking of sea shipments,” Ng told Bloomberg. “Ocean freight costs have increased five to six times from the levels pre-Covid and this has translated into higher operating costs for logistics companies.”

Logistics companies have been working to improve business productivity by sharing resources and leveraging technology, Ng said. But they still face difficulties in filling jobs, particularly driving and warehousing, which could impact operations in the near term, he said.

Meanwhile, Bloomberg reported this week that shipping giant Maersk said earlier this week that it’s diverting some ships from the U.K.’s largest container port because of congestion tied to a trucker shortage. Many logistics companies are finding it difficult to find drivers to pick up and deliver containers, causing a backlog at the Port of Felixstowe.

Port congestion and lack of containers has driven shipping rates to record levels this year. Spot levies to haul a 40-foot container to Los Angeles from Shanghai peaked at $12,424 last month before easing to $11,173 as of Oct. 7, the Drewry World Container Index show. Rates to Rotterdam from Shanghai hit an all-time high of $14,807 last week. Shipping rates dipped modestly in the latest week, but as we explained previously, this was for the worst possible reason namely a sharp drop in China output. Expect a sharp spike in the next few weeks as throttled Chinese production returns.

Exporters and shipping companies have been trying to find alternative routes to avoid the backlog. Some cargo from China is now being shipped to Busan and then reloaded on ships bound for Russia’s east coast before being put on trains and sent through to Europe.

In an act of sheer desperation, the Biden admin announced on Wednesday that the Port of Los Angeles will begin operating 24 hours a day, seven days a week as part of efforts to break the logjam. However, as Rabobank explained earlier this morning, simply getting containers out of the terminal at LA achieves very little if you don’t the solve chassis crisis; if the containers sit there waiting for trucks; or for truckers; or for rail. All you do is move the logjam from sea to shore – and that can potentially make matters worse. The Transportation Secretary running this task force is a vocal opponent of the ‘so build a bigger road’ mentality that ends up with bigger roads and the same traffic logjam.