THE UK’s traffic light travel system has now been updated and the Balearic Islands, Malta and Madeira have now been added to the green list.

In a major win for summer holidays, the bumper list of new destinations where Brits can travel without quarantining on their return to England opened up from 4am today.

All 16 green list additions except Malta are on a “watch list” which means they could revert to amber.

The announcement has been welcomed by cash-starved airlines, travel companies and holidaymakers longing for a post-pandemic retreat after months in lockdown.

Six countries have also moved to the red list, meaning that Brits will have to spend 10 days in a quarantine hotel on their return to England.

These include the Dominican Republic, Tunisia, Haiti, Eritrea, Mongolia and Uganda.

After Portugal was struck off the green list three weeks ago, some of the only viable holiday destinations have been Gibraltar and the Falkland Islands. 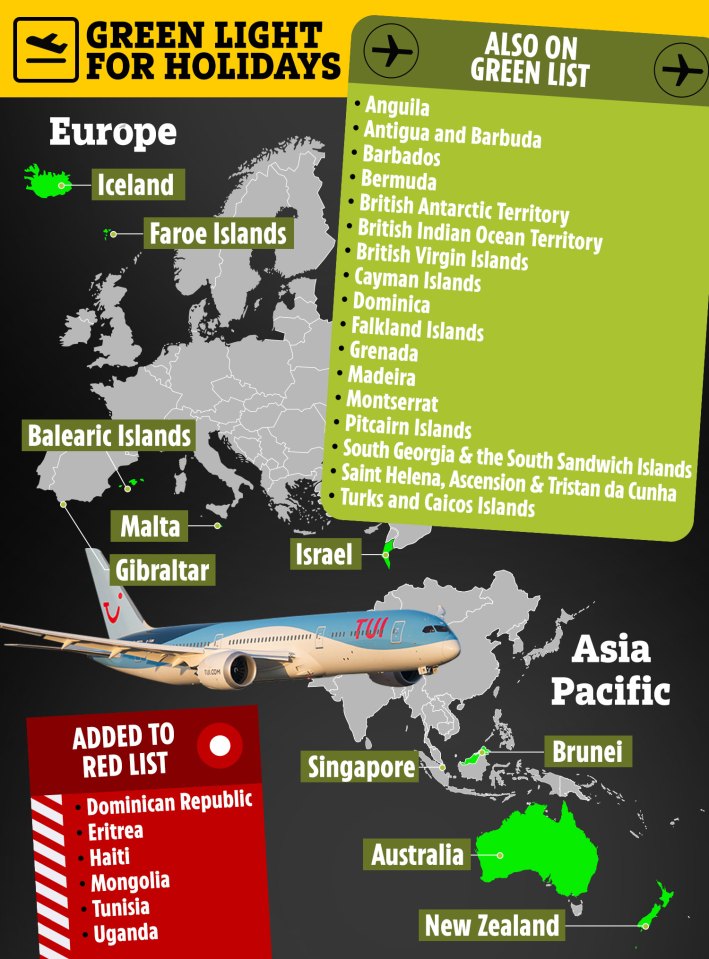 Low-case countries such as Australia and New Zealand are on the list – but have slammed their doors shut to Brits.

But as the UK starts to open up to more countries by adding them to our green list, entry into other nations has become more difficult.

A number of countries including Spain, Malta and Portugal have tightened border rules for travellers from the UK in recent days, because of fears over our rising number of Delta variant cases.

Brits heading on holiday to Spain will need to be fully vaccinated or have a negative Covid test, under new rules being enforced later this week.

Spain had been one of the few holiday destinations that allowed UK travellers to enter without restrictions, with Brits with just one jab allowed in without having to quarantine.

Portugal has carried out its threat to make British adults who travel to the country self-isolate for 14 days from today unless they can show they are fully vaccinated.

Meanwhile, Malta requires Brits to have both jabs to be allowed into the country, including 12-17 year olds – ending any family holiday plans for Brits.

In addition, Maltese officials announced yesterday that they won’t accept the NHS app as proof of vaccine, requiring instead an official NHS letter – which can take up to five days to arrive in the post.

So travellers who have a holiday booked to Malta in the next few days could have problems proving their vaccination status on arrival into the country.

German Chancellor Angela Merkel is hoping to push restrictions on Brits even further, demanding EU member states close ranks to both jabbed and unjabbed Brits to stop an influx of the UK’s dominant Delta variant.

She is agitating for the UK to be designated a “country of concern” and force arriving Brits into 14 days mandatory quarantine.

Key power-broker French President Emmanuel Macron has thrown his weight behind a “harmonised” EU response, but France only currently requires non-vaccinated Brits to quarantine on arrival.

Boris Johnson will try to talk the German Chancellor back from the brink when he hosts her at his grace-and-favour Chequers mansion on Friday.

Dominican Republic, Tunisia and Haiti among 6 added to red list from Wednesday

Freezing out Brits from Europe would be a hammer blow to the Government’s plan to revive foreign holidays this summer.

It means holidays would be given the green light to all but the most Covid-afflicted countries.