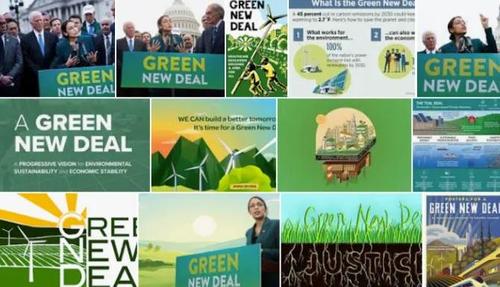 The only reason Illinois taxpayers are not already majorly screwed over by Green New Deal madness is the unions and the Green party have competing goals.

Wirepoints authors Ted Dabrowski and John Klingner have an alarming report on a Green New Deal bill in Illinois that has stalled only because competing interests have differing views on how to screw taxpayers.

Please take a look into the downright scary details of the 800-Page-Plus Green Energy Behemoth as noted by Wirepoints.

The Illinois Senate adjourned this week without calling for a vote on the state’s controversial green energy proposal, delaying a massive transformation of the state’s energy sector. The energy package includes a requirement for the state to go fully green by 2050, sets shut-down dates for coal and natural gas plants, gives hundreds of millions in subsidies to Exelon’s nuclear plants, adds new funding for energy construction and infrastructure projects, and more.

The package has stalled largely due to differences between two of the left’s powerful interest groups: labor unions and the green lobby. Environmentalists want rapid shutdowns of the state’s coal and natural gas plants. Labor groups want those plants kept open for as long as possible to preserve thousands of union jobs. That issue hadn’t been ironed out by the time the Senate left Springfield.

Champions of a deal, including Gov. J.B. Pritzker, are stuck balancing the competing demands of the labor unions, environmentalists, the equity movement and big business – all while cramming an enormous change down on Illinois’ energy sector and the general public.

Regarding point #2 please note that according to the US Energy Information Administration, renewables make up less than 10 percent of all production today.

There’s no clear plan on how to make the transition to 40% renewables let alone 100 percent clean.

Exelon Corp. is positioned to receive as much as $1 billion over a five-year period for two of its nuclear power locations as part of ongoing talks to complete major energy legislation in Illinois, according to four sources familiar with the negotiations.

That subsidy will be paid by someone. Guess who.

Unfortunately, Wirepoints concludes “Passage of the bill in some form is inevitable. With supermajorities in place, Illinois Democrats will likely end up hashing things out. “

Word of Warning to Illinois Businesses

The same warning goes out to citizens in general. To pay for this madness, on top of insolvent pension plans, there is only one way for taxes to go and that is up.

Thanks to Congressional handouts passed in reconciliation with zero Republican votes, Illinois will receive $13.2 billion in federal funding it can spend over the next three fiscal years.

Illinois also borrowed billions from the Fed to pay down its backlog of unpaid claims.

The 3% rate to the Fed is a huge reduction to the 12% statutory prompt payment penalty rate that Illinois paid vendors.

But that stimulus is about to end, and Illinois squandered it already (evidence coming up in a follow-up article).

Get the Hell Out ASAP

Questions of the Day

Q1: Why 3 weeks? Because that’s how long it took to reserve a one-way U-Haul outbound.

Q2: What are Biden and the Fed going to do for an encore to allow Illinois to kick the can further?

The answer to Q2 remains to be seen, but if I was Illinois I would suggest not counting on more money from Congress.