Members of European Parliament (MEPs) voted on July 6 not to reject adding nuclear and natural gas activities to the European Union taxonomy for sustainable investments, paving the way for the EU to include such projects in its so-called “green” investments.

As OilPrice.com’s Tsvetana reports, in a vote on Wednesday, most members of the European Parliament did not support a motion to block the Commission’s proposal. A total of 278 MEPs voted in favor of the resolution to block the proposal, 328 voted against, and 33 abstained. The vote failed to reach an absolute majority of 353 MEPs which was needed for Parliament to veto the Commission’s proposal.

If neither Parliament nor Council object to the proposal by July 11, 2022, the act will enter into force and apply as of January 1, 2023, the European Parliament said.

The EU could reject the “green” status for gas and nuclear if 20 out of the EU’s 27 member states reject it, which is highly unlikely, analysts say.

The European Commission updated earlier this year its Taxonomy Complementary Climate Delegated Act on climate change mitigation and adaptation covering certain gas and nuclear activities. Under the new taxonomy, some gas projects, including several pipelines, were given a “sustainable investment” status. Gas projects are “transitional” if they contribute to the transition from coal to renewables, the EU says.

The bloc is accelerating its efforts to reduce dependence on Russian pipeline gas after Russia invaded Ukraine, cut off the gas supply to several EU members that refused to pay in rubles, and most recently, slashed supply to major customers, including Germany and Italy.

The “green status” for gas and nuclear has stirred a lot of controversy in EU institutions and among officials.

Applause breaks out in the European Parliament for protesters wearing shirts spelling out “BETRAYAL” after the parliament blocked an objection to labeling some gas and nuclear energy projects as “green” energy. pic.twitter.com/5uD73QFBC7

Some have argued supporting gas is now of critical importance with an unreliable major supplier, Russia. Others have said that the war in Ukraine and the Russian behavior in energy supply should be a wake-up call for the EU and the world to look to renewables and ditch dependence on fossil fuels.

And Greta is mad…

Tomorrow the European Parliament will decide whether fossil gas and nuclear will be considered “sustainable” in the EU taxonomy. But no amount of lobbyism and greenwashing will ever make it “green”.
We desperately need real renewable energy, not false solutions. #NotMyTaxonomy

As Brad Palumbo writes at The Washington Examiner, Thunberg is not the only supposed climate activist who has shunned nuclear power. 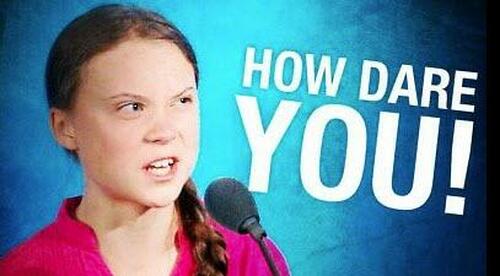 Here in the United States, far-left Rep. Alexandria Ocasio-Cortez (D-NY) took major flack because her so-called “Green New Deal” did not mention the word “nuclear.” Sens. Elizabeth Warren (D-MA) and Bernie Sanders (I-VT) actually campaigned for president in 2020 on the stance that we should not build new nuclear plants and should “phase out” nuclear energy.

So Thunberg’s viral stance is just the latest in a long history of the green Left opposing nuclear power. But this blind spot is utterly unsupported by the actual evidence and reveals that these activists’ true priority is not protecting the climate from carbon emissions. If that was really their priority, they’d be pushing nuclear power like crazy.

According to the U.S. Department of Energy , nuclear energy is a “zero emissions clean energy source” that also “keeps the air clean by removing thousands of tons of harmful air pollutants each year that contribute to acid rain, smog, lung cancer and cardiovascular disease.”

Of course, left-wing activists cite the waste produced by nuclear power generation as what makes it supposed not really “green.” But this isn’t a legitimate argument. As the DOE explains, “All of the used nuclear fuel produced by the U.S. nuclear energy industry over the last 60 years could fit on a football field at a depth of less than 10 yards.”

Surely, we can manage to store that amount of waste safely, and it’s undoubtedly worth the trade-offs in terms of the enormous reduction in other pollutants. Indeed, DOE says that nuclear energy in the U.S. since 1995 has had the carbon dioxide emissions prevention equivalent of taking 3 billion cars off the road!

So why do so many left-wing activists still oppose nuclear energy and support the status quo, under which many countries’ governments make nuclear energy development incredibly difficult?

Some are undoubtedly well-intentioned and just misinformed about the facts regarding nuclear. Others may remain understandably but unduly scared by the word “nuclear” and one-off tragedies such as the Fukushima, Japan, meltdown , which happened using long-outdated nuclear technology.

But the truth is that many left-wing activists, such as Ocasio-Cortez, oppose nuclear energy because their real climate agenda is a backdoor for radical socialist economic overhaul and the destruction of capitalism. You don’t have to take my word for it. Ocasio-Cortez’s former chief of staff openly said that the “Green New Deal” actually “wasn’t originally a climate thing at all,” adding, “We really think of it as a how-do-you-change-the-entire-economy thing.”

So, the real antipathy against nuclear stems from the fact that nuclear energy is an efficient, zero-emissions, safe form of energy production that can address climate change through deregulation rather than a sweeping socialist overhaul of the economy.