Authored by Rick Moran via PJMedia.com,

The New Yorker reported on Friday that State Department and intelligence officials were probing a recent spate of mysterious illnesses that have struck U.S. diplomats in Vienna. 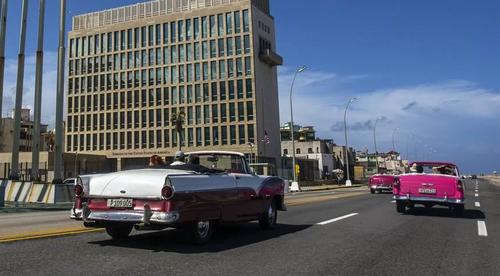 Sources say that many of the symptoms resemble those experienced by diplomats in Cuba in 2016-17. The illnesses have been investigated by intelligence agencies, the State Department, and the National Academy of Sciences with no conclusions drawn about what is causing them.

The illnesses were first reported in Havana, but other embassies in Eastern Europe have also reported outbreaks of the illness. Individual cases have been reported in Washington, D.C., and several cases were discovered in Miami.

The State Department refers to the conditions, commonly known as “The Havana Syndrome,” as “unexplained health incidents (UHI).”

“In coordination with our partners across the U.S. government, we are vigorously investigating reports of possible unexplained health incidents among the U.S. Embassy Vienna community,” the State Department said.

“Any employees who reported a possible UHI received immediate and appropriate attention and care.”

Some in the intelligence community believe the UHIs are the result of some kind of directed energy weapon. There are some scientists who doubt whether the UHIs are the result of a “weapon” of any kind, and suggest that the symptoms can be explained as some kind of “mass psychogenic illness” in which people learning of others with symptoms begin to feel sick themselves.

A State Department report on “Havana Syndrome” obtained by CNN through a Freedom of Information Act request “concludes that the US government’s response and investigation into the so-called Havana Syndrome may have been botched from the beginning” and was characterized by “chaos” and disorganization.

The Vienna-based employees have reported suffering from mysterious symptoms since President Joe Biden was inaugurated, according to the officials. The Vienna cases were first reported Friday by The New Yorker magazine.

Vienna has for centuries been a center for espionage and diplomacy and was a hub for clandestine spy-versus-spy activity during the Cold War. The city is currently the site of indirect talks between Iran and the United States over salvaging the nuclear deal that was negotiated there in 2015.

Those talks are now in hiatus and it was not immediately clear if any members of the U.S. negotiating team were among those suffering from injuries.

Try as they might, investigators have been unable to duplicate the symptoms of UHI using microwaves or any other energy source. In fact, there is nothing in the scientific literature that suggests anything similar happening anywhere.

If this is, indeed, an attack, it’s an act of war. But even if scientists figure out exactly what’s causing the symptoms, who or what is responsible may never be revealed.

How close would the “weapon” have to be to cause the symptoms? How much energy would have to be released?  Would such a weapon be mobile enough to carry in a car or truck? What parts of the brain are being “attacked”? That’s what leads some scientists to believe in the mass psychogenic illness theory.

Some of the symptoms apparently linger for months. Most have reported headaches, dizziness, and symptoms consistent with concussions. Some have reported hearing a loud noise before the sudden onset of symptoms.

Whatever is causing Havana Syndrome, American diplomats appear to be walking around in some countries with bullseye on their backs.