Highlights From Gensler’s Talk On Crypto Regulation, And All Key Crypto Developments This Week

It was a busy week for cryptos on both the regulatory and corporate adoption front, but the highlight was the talk delivered on August 3 by SEC Chairman Gary Gensler who laid out his views on crypto at the Aspen Security Forum. Below, are the top takeaways (from JPM’s Steven Alexopoulos):

Besides Gensler, some other notable developments included recent moves at the OCC, a comprhensive bill to regulate the crypto market, an interesting decision by the Singapore central bank and of course, the tax treatment of crypto as envision in the Biden Infrastructure bill:

On the corporate side, it was a busy week as well, with JPM launching a bitcoin fund for private bank clients, ETF giant Invesco filing for a bitcoin strategy ETF with the SEC that will invest primarily in bitcoin futures – in compliance with Gary Gensler’s stated vision – as well as having exposure to other bitcoin funds such as the Grayscale Bitcoin Trust; there were also news out of Grayscale which hired David LaValle, former CEO of custom index provider Alerian to be its global head of ETFs, as it attempts to convert its $22BN bitcoin trust into an ETF, and finally Valkyre Digital Assets – an asset manager – is offering a trust denominated in Dash that offers exposure to Dash as well as yield from staking; the closed-end fund will be offered on OTC markets available to retail investors. 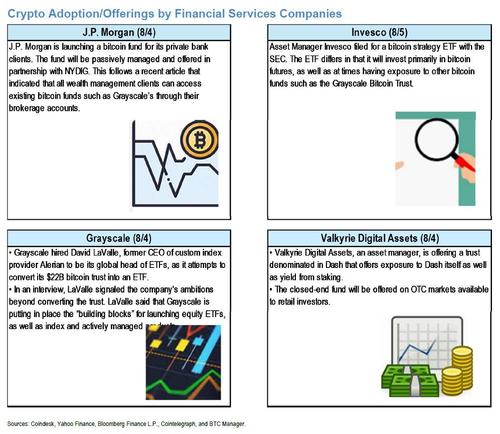 Finally, in terms of the latest crypto adoption news, we learn that tech-focused e-tailer Newegg Commerce will accept payment in Litecoin,becoming the first merchant to accept Litecoin as a payment method on the BitPay platform; restaurant chain Quiznos announced that it has partenered with Bakkt Holdings, which is the digital marketplace behind the Bakkt App, which will allow Quiznos customers to pay with bitcoin at select locations; Burberry and Louis Vuitton also made the news: Burberry will soon release an NFT game characters called “Sharky B” while a Louis Vuitton game will offer 30 NFTs; the marketing teams around other major fashion brands have also tapped into the buzz around NFTs; Last but not least, Google is again allowing crypto ads after the company released new policies. The policies place restrictions on advertisers with the requirement that they be registered money service business with FinCen, and as a state-registered money transmitter, a federally-chartered bank or a state-chartered bank. 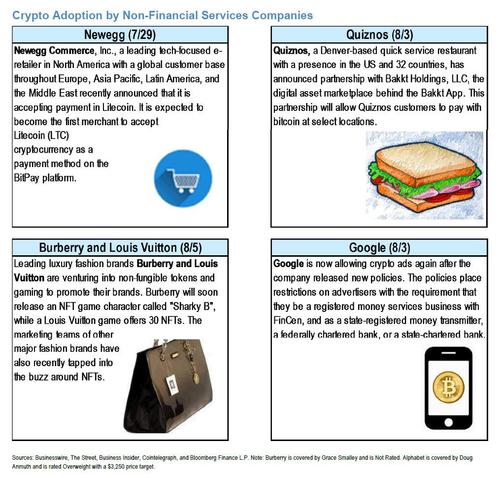