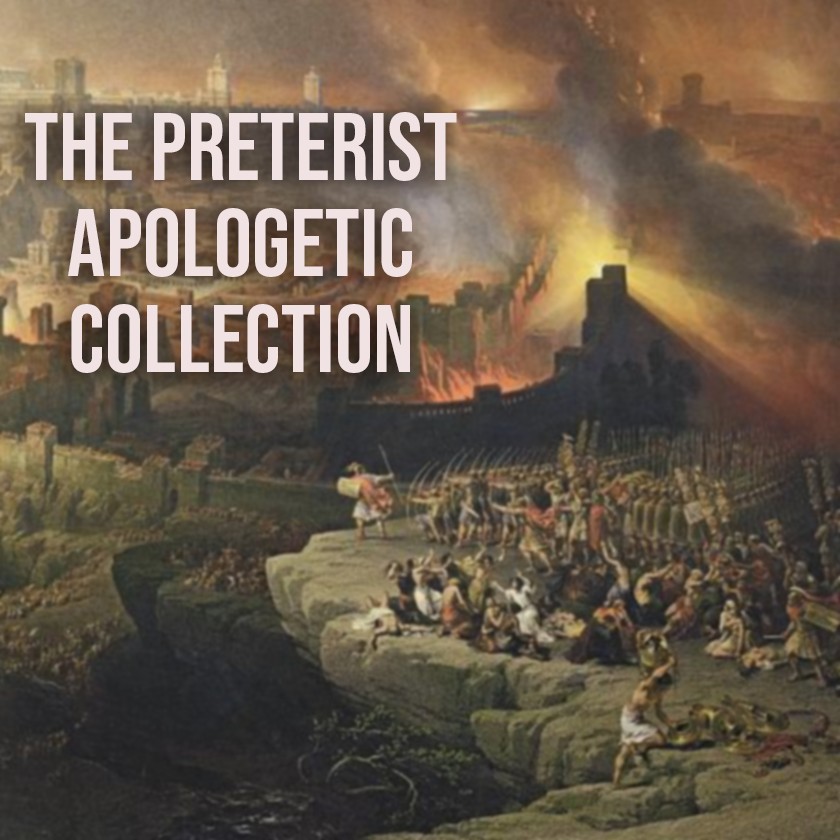 The following article, “His blood shall be on us and on our children!”, was first published on The American Vision.

For Part One of this series read “The Use of the Second Person Plural (‘You’) in Matthew 24,” a response to an upcoming debate between Brock Hollett and Sam Frost on whether the abomination of desolation mentioned by Jesus in Matthew 24:15 is fulfilled prophecy or yet to be fulfilled.

For a study of some of Brock Hollett’s shifting prophetic views, see my book DEBUNKING A DEBUNKER OF PRETERISM .

When Pilate saw that he was accomplishing nothing, but rather that a riot was starting, he took water and washed his hands in front of the crowd, saying, “I am innocent of this Man’s blood; see to that yourselves.” And all the people said, “His blood shall be on us and on our children!” Then he released Barabbas for them; but after having Jesus scourged, he handed Him over to be crucified (Matt. 27:24–26).

Indeed, the judgment on Jerusalem was on them and their children. This was to be a national judgment (23:37–38) that could be escaped by leaving the city (24:16–17; Luke 21:20–24). No future generation was guilty of the crime of crucifying “the Lord of Glory” (1 Cor. 2:8: note “the rulers of this age”) and choosing someone like Barabbas to be released instead of Jesus and declaring that they had “no king but Caesar” (John 19:15). A future generation of Jews isn’t guilty of this particular evil, therefore, why should it be judged?

Now not with you alone am I making this covenant and this oath, but both with those who stand here with us today in the presence of the LORD our God and with those who are not with us here today (Deut. 29:14–15).

Israel was directly told that some of what was said would apply to “the generation to come” (29:22). Those who made up that contemporary generation would have their heart circumcised and the heart of their descendants (30:6; also v. 19).

In Deuteronomy 31, we find a prophecy about what is specifically said about the future. The prophecy is not limited to “this,” that is, their generation as it is in the Olivet Discourse.

The other problem the futurist interpretation of Matthew 24:15 must face is where the abomination of desolation will appear. All agree that it’s in the temple, the temple that Jesus said would be destroyed before that generation passed away. “Not one stone here shall be left would be left upon another, which will not be torn down” (Matt. 24:2). All agree that this took place in AD 70.

Worth well over $50, the Preterist Apologetic Collection is a great addition to any Bible prophecy research library. The Stonehouse book alone can’t be found for less than $500; it’s that rare. And good luck finding the Pieters article anywhere but in this set.

First, as we’ve seen, there is no indication that the use of the second person plural (you) refers to a non-identified future generation. Unlike Deuteronomy 29–30, Jesus does not mention distant generations. The use of the second person plural is used consistently for those of that generation. Consider Matthew 24:33: “so, YOU too, when YOU see all these things, recognize that He/it is near, right at the door.” It is beyond me how anyone can claim that the first use of “you” is different from the second use of “you” separated by nearly 2000 years.

Jesus’ enemies certainly understood the audience relevance of His words after a series of parables. Who is Jesus referring to when He asks, “But what do you think?” (Matt. 21:28) and “Did you never read in the Scriptures?” (21:42), and “Therefore I say to you, the kingdom will be taken away from you, and be given to a nation producing the fruit of it” (21:43)? It seems the chief priests and Pharisees had a better understanding of language than many modern-day prophecy theorists:

And when the chief priests and the Pharisees heard His parables, they understood that He was speaking about them (21:45).

The second person plural in Matthew 24 begins with verse 2 (“do you not see”) and can only refer to those in Jesus’ audience. At what point does the use of “you” switch to a future audience? A comment in Tim LaHaye’s Prophecy Study Bible claims that “you” in Matthew 24:15 “must be taken generically as ‘you of the Jewish nation.’” [1] Where in the text does it say this? There is no evidence offered by the editors to substantiate a shift in audience reference from the disciples of that generation to Jews living at a time far removed from their day. If Jesus had wanted to refer to a different audience, He could have said, “When they see the abomination of desolation which was spoken of through Daniel the prophet, standing in the holy place (let the reader understand).” Even if the “you” in 24:15 does refer to the “you of the Jewish nation,” the reference is to the Jews of that generation alone based on verses 33 and 34. Brian Schwertley in his commentary “Matthew 24 and the Great Tribulation” frames the argument well:

Speaking directly to the disciples, … Jesus said to them: “Take heed that no one deceives you” (v. 4); “you will hear of wars” (v. 6); “see that you are not troubled” (v. 6); “they will deliver you up to tribulation and kill you, and you will be hated by all nations” (v. 9); “when you see the abomination of desolation” (v. 15); “So you also, when you see all these things, know that it is near—at the doors!” (v. 33), “Assuredly I say to you this generation will by no means pass away till all these things take place” (v. 34). Given all these things we can say with assurance that the disciples most likely took Christ’s words at face value. If one accepts the futurist interpretation of Matthew 24:5–34, then one has accepted an interpretation of which the apostles were almost certainly ignorant.

Why confuse the disciples when Matthew includes the phrase, “let the reader understand” (24:15)? They were to understand, not just about the abomination of desolation but about the entire discourse because they would have to take action when certain events took place (24:16–17; Luke 21:20–24).

Continue reading “His blood shall be on us and on our children!” …