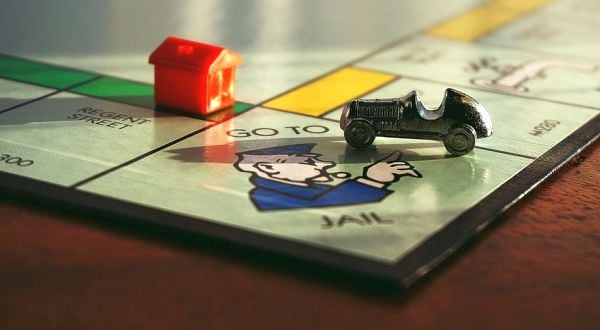 Many of us, whether we live in the United States or one of many other countries around the world, have heard of the board game Monopoly or have enjoyed playing it with family and friends. It’s a game I have played and enjoyed since my years in college. Derived from a board game called The Landlord’s Game and invented in 1903 by Lizzie Magie, Monopoly’s popularity has continued for more than a century. It is currently licensed locally in more than 110 countries and printed in more than 40 languages.

In a typical game, players roll two dice to move tokens around the game board, buying and trading properties, developing them with houses and hotels once properties with the same color are acquired, and collecting rent from their opponents. Money can also be gained or lost through Chance and Community Chest cards, and tax squares. Players can end up in jail, where they cannot leave until one of several conditions have been met; and the game has a variety of customized house rules that can be used. The winner of the game is the person who has driven his opponents into bankruptcy.

A few years ago, I purchased an online version of this game for my mobile device. I was very pleased with its design, for it looked exactly like the board game, all the way down to the dice and player tokens. It was very easy to play using the official rules, customized rules, with friends online, or against the artificial intelligence (AI/computer). While I have played with family online, I have often played against the AI.

According to the creators of this online version, the algorithms controlling the game’s chance mechanics are statistically random. But I have noticed that the AI, from seeming craftiness, often skips its token over the properties I own, while seemingly making sure my token often lands on its properties or incur tax penalties. However, I noticed a pattern in games with the AI. Its “greedy tendencies” were the means for its defeat. When going around the board, if I made sure I gained a property in all of the eight street blocks, even if some properties had to be bought from the AI at an exorbitant price, the AI would be unable to get a monopoly of a street block and develop them with houses and hotels to gain higher rent revenue from me. With patience, over time I would be able to get a few monopolies of street blocks and develop them. No matter how long the AI may avoid them on the board, or how many setbacks may occur to me in the game, inevitably the AI would go bankrupt and lose the game.

Life can often seem like a Monopoly game. We work to build wealth and provide for ourselves and our families as we deal with the ups and downs of living in a sinful world. We have joyous times such as the birth of a new child or a promotion at work; or we go through terrible times such as illness, unemployment, or the death of close family or friends. Along with this, occasions too often arise where injustice on the national and personal level seems to be rewarded and being righteous brings punishment.

TRENDING: NO allowance for the children?

The prophet Habakkuk struggled with how God could allow wicked individuals and nations to prosper as they oppressed those unable to defend themselves against them (Habakkuk 1:2-4).

Many of us can relate to Habakkuk’s feelings of frustration and despair as we see similar things take place in our lives under the sun. It is even tempting at times, as Asaph expressed in Psalm 73, to join the wicked since they seemingly are not held accountable for their evil deeds, but instead, profit fabulously from them.

Yet, the hopeful message given by the Lord to Habakkuk was that terrible times or oppression do not last forever (though it may seem like it sometimes). In His perfect time and way, the Lord will set things right. We just need to trust Him and wait for the outworking of His plan (Habakkuk 2:2-4).

Living by faith in God helps to provide endurance through the happenings of life. It provides a true hope, a sustaining anticipation, especially when things are generally not going very well. That is how Habakkuk could end his book with an exultant affirmation of faith in God (Habakkuk 3:17-18).

The apostle Peter expresses this same wonderful message. All who trust in Christ alone receive an inheritance that He earned through His life, death and resurrection. It cannot be lost or stolen. It is incorruptible, undefiled and does not fade away (1 Peter 1:3-9).

Many of us are familiar with the Hall of Faith in Hebrews 11. Often more attention is given to the blessings received by those who followed the calling of God and accomplished great things. But the last several verses speak of those who went through severe persecution and hardship yet maintained their faith in God and looked forward to His promises. In the midst of their suffering, they had hope in the Lord, who never fails to fulfill His promises (Hebrews 11:32-40; 12:1-3).

Do not lose hope or drop out of the race. God is faithful and cannot lie. He is utterly reliable and will keep all the promises He has made. Because of this we can have the absolute assurance that nothing with which we struggle in this life will prevent God from keeping us on the path to heaven and getting us there. It is not our performance that determines His faithfulness, but His character.

So how does this relate to a Monopoly game app? The ups and down of the game, the setbacks, the frustrations at the AI “cheating” at times, are reminiscent of the events of life. In its own way the game has taught me patience and hope. For example, when the AI is unable to get a monopoly of a street block, winning the game is assured. Likewise, Jesus has gone ahead and defeated the devil’s attempt to monopolize my life, bankrupt and destroy it, by dying for all of my sins on the cross and rising again from the dead. The faith He has granted as a gift carries me through the joys and sorrows of life, the triumphs and the tragedies, because the victory Jesus won beforehand assures my own in the end.

We can go through hardships in life patiently and with a joyful hope because Jesus has already won the victory at the cross, making the victory of all who trust in Him alone certain.