HORROR details have emerged as the investigation into a homeschooled teen’s death continues.

Alexandru Radita died in 2013 weighing only 37 pounds after crucial clues about his mistreatment were missed.

The 15-year-old from Calgary, Alberta, Canada died of bacterial sepsis caused by starvation and diabetes that hadn’t been treated.

In 2017, his parents, Emil and Rodica Radita, were found guilty of first-degree murder.

They are serving life sentences with no chance of parole for 25 years.

Now, the homeschooling system Alex was part of has come under fire as the investigation into his death continues. 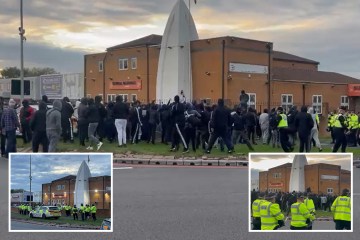 A fatality inquiry into the teen’s death began earlier this week.

The inquiry looks to figure out how similar incidents can be avoided in the future.

Officials are having a look at the practices in place – and how they can be improved – to pick up on when students aren’t registered for school.

When Alex was a student in the system, he reportedly did not submit any work during his Grade Five year in 2009.

As a result, his registration was withdrawn by the School of Hope online school at the end of the year.

Alex was never re-registered for school.

According to Alberta Education field services manager Christine Bouchard, a new practice has since been installed alerting school boards when students are not registered.

Bouchard also testified during the inquiry that there are still pain points among the schools, school boards, and Department of Education as the safeguard continues to be rolled out.

She also said that while the homeschooling program has an option for a government official to investigate whether a student is receiving education, none has taken place despite reports that have been made.

It has also been found that Alex was kept in “purposeful isolation” by his parents, and therefore didn’t have contact with anyone who might have intervened, Alberta Court of Queen’s Bench Justice Karen Horner said.

“He had no friends or teachers or support people or doctors, or really anyone,” Crown prosecutor Susan Pepper told the CBC.

Alex has seven surviving siblings, but their conditions are unknown.

Nine years after Alex’s death, child service protocols are also being investigated in his case to prevent the same tragic fate from happening to more children.

Although Alex’s parents knew of their son’s diagnosis from the time he was two years old, they repeatedly told medical officials they didn’t believe their son had diabetes, according to evidence presented at their trial.

When the boy’s body was found, he was in the 0.1 percentile for 15-year-olds based on his weight and height, according to the medical examiner.

Alex had 44 ulcers and wounds covering his body and his teeth were “rotted to stumps,” said forensic pathologist, Dr. Jeffery Gofton.

A neck wound on the boy was so deep his jaw bone was visible and his neck muscles were “near total liquefaction,” Gofton said.

After Alex was hospitalized numerous times from several years of untreated diabetes, he was on the brink of death at age five.

That year in 2003, when Alex was taken to the hospital, he was so sick that he was just hours away from dying from his illness.

Alex was then taken away from his family for about a year under the care of British Columbia Children’s Services.

However, he returned to his parents with a judge believing that Alex would be watched over by the school and health officials.

His family moved from Surrey, British Columbia to Alberta in 2009 where they fell off the grid.

With Alberta authorities not being notified of the Alex’s file and the officials from Surrey not being aware of the move, Alex was left vulnerable to his parent’s abuse.

Alex’s parents were given the opportunity to address the court before their sentencing but they declined.