House Impeachment Brief Against Trump Threatens Freedom Of Speech Of All Americans: Dershowitz

Authored by Tom Ozimek via The Epoch Times,

Harvard Law School professor emeritus Alan Dershowitz said Thursday that the House impeachment brief against former President Donald Trump, which seeks to undermine Trump’s First Amendment-based argument in his defense, amounts to a dangerous broadside against the freedom of speech of all Americans. 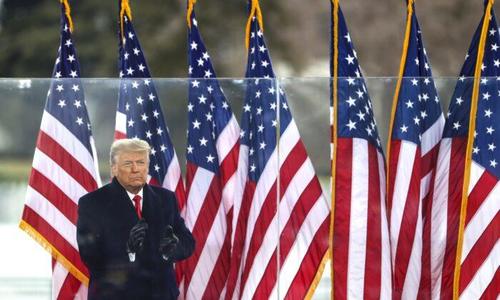 Writing in an op-ed for The Hill, Dershowitz made a case against a key argument contained in the brief (pdf), namely that “the First Amendment does not apply at all to impeachment proceedings,” signals Congressional willingness to take aim at freedom of speech more broadly.

“The brief filed by the House managers advocating the conviction and disqualification of citizen Donald Trump contains a frontal attack on freedom of speech for all Americans,” Dershowitz wrote.

“It states categorically that ‘the First Amendment does not apply at all to impeachment proceedings,’ despite the express language of that amendment prohibiting Congress from making any law, or presumably taking any other action, that abridges ‘the freedom of speech.’” 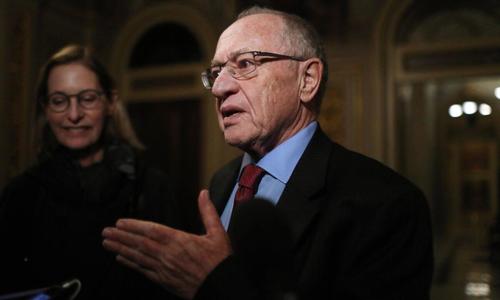 Attorney Alan Dershowitz, then member of President Donald Trump’s legal team, speaks to the press in the Senate Reception Room during the Senate impeachment trial at the Capitol in Washington on Jan. 29, 2020. (Mario Tama/Getty Images)

The legal scholar then challenged another statement in the brief, namely that “the First Amendment exists to promote our democratic system.”

“This categorical statement surely would have surprised the Framers of the First Amendment, who believed in freedom of speech but not so much in democracy,” Dershowitz wrote. “The Framers of our constitutional system thought they were building a ‘republic,’ with limited suffrage and many checks on ‘democracy,’” he added, arguing that freedom of speech is “essential to keeping it a republic, but not necessarily a democracy.”

“So, no, the First Amendment does not exist only to ‘protect our democratic system.’ It exists to protect our liberty, regardless of what system we choose,” he wrote.

Dershowitz said that the argument made by the authors of the House brief that the First Amendment “doesn’t apply to presidents or others who ‘attack our democracy,’ is the same as that made by Sen. Joseph McCarthy and his acolytes decades ago “when they sought to deny First Amendment protection to communists and others who were seen as enemies of democracy and who, if they had come to power, would have denied the rest of us our freedoms, including that of free speech.”

The House brief argues that the First Amendment protects private citizens from the government but “it does not protect government officials from accountability for their own abuses in office.”

Holding Trump “accountable through conviction on the article of impeachment would vindicate First Amendment freedoms—which certainly offer no excuse or defense for President Trump’s destructive conduct,” the brief’s authors argue.

“Even if the First Amendment were applicable here, private citizens and government officials stand on very different footing when it comes to being held responsible for their statements,” they wrote.

Citing U.S. Supreme Court rulings in cases Branti v. Finkel and Elrod v. Burns, they argued that, “as the leader of the Nation, the President occupies a position of unique power. And the Supreme Court has made clear that the First Amendment does not shield public officials who occupy sensitive policymaking positions from adverse actions when their speech undermines important government interests.”

The House brief alleges that Trump incited a mob that breached the U.S. Capitol on Jan. 6 by sowing doubt about the integrity of the 2020 presidential election. 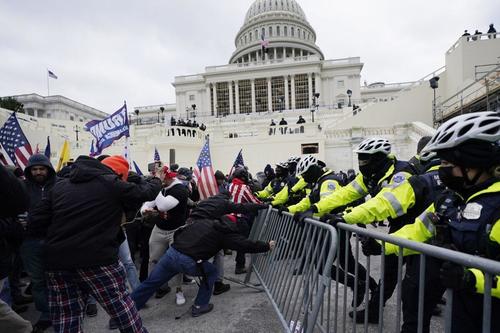 Protesters clash with police at the U.S. Capitol in Washington on Jan. 6, 2021. (Julio Cortez/AP Photo)

Trump’s legal team denies the allegation and argues in a memo (pdf) that the trial is unconstitutional because Trump is no longer president. The team also argues that Trump exercised his First Amendment rights in calling into question the results of the election.

“After the November election, the 45th President exercised his First Amendment right under the Constitution to express his belief that the election results were suspect, since with very few exceptions, under the convenient guise of COVID-19 pandemic ‘safeguards’ states election laws and procedures were changed by local politicians or judges without the necessary approvals from state legislatures,” the legal team wrote.

“Like all Americans, the 45th President is protected by the First Amendment,” they wrote. “Indeed, he believes, and therefore avers, that the United States is unique on Earth in that its governing documents, the Constitution and Bill of Rights, specifically and intentionally protect unpopular speech from government retaliation.”

“If the First Amendment protected only speech the government deemed popular in current American culture, it would be no protection at all,” they added.

Dershowitz’ sentiment that the reasoning featured in the impeachment brief is a threat to freedom of speech more broadly was echoed in a statement by Trump adviser Jason Miller, who said: “not only will President Trump be on trial next week. The First Amendment will be on trial next week because the Democrats aren’t going to stop with attacking President Trump, they want to go after the free speech and the rights of all Americans.”

Democrats face an uphill battle in the Senate in their pursuit of an impeachment conviction against Trump. Forty-five Republican senators voted in favor of a resolution calling the trial unconstitutional, since Trump is now a private citizen. With the Senate split 50–50, the impeachment managers would have to convince 17 Republicans that the trial is constitutional and that Trump is guilty of inciting an insurrection.