After a brief pause, mortgage applications tumbled again last week (-4.0% WoW after falling 4.2% WoW the prior week), to their lowest level since February 2020. 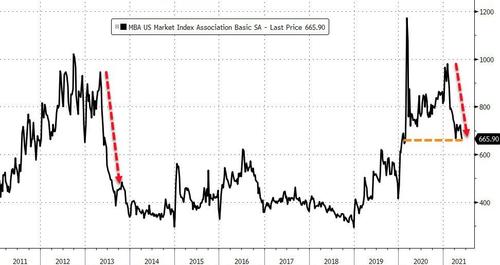 And while refis have now stagnated, home purchase applications have plunge to a new post-pandemic low as the ‘dopamine of collective euphoria’ in the housing market wears off… 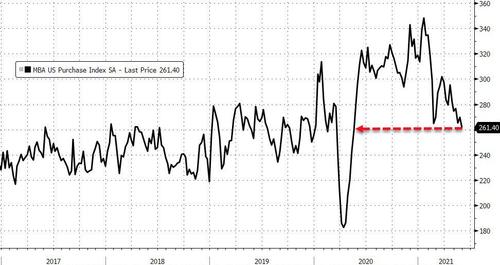 As Kara Cox recently wrote at WolfStreet.com, having lived both in the Bay Area during the dotcom explosion and NYC during the MBS explosion, I know a thing or two about financial bubbles. Or at least how they feel in the moment: akin to being at a frat party at 2 am. Everyone is spewing garbage but thinks they are a genius, and the only way to make sense of it all is to drink up or take yourself home.

And while homebuilders remain euphorically optimistic, homebuyers (according to the latest sentiment surveys from UMich and The Conference Board) have hardly ever been more gloomy in their buying attitudes… 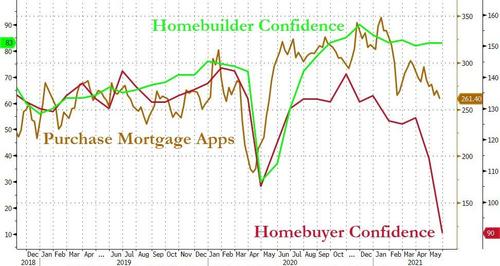 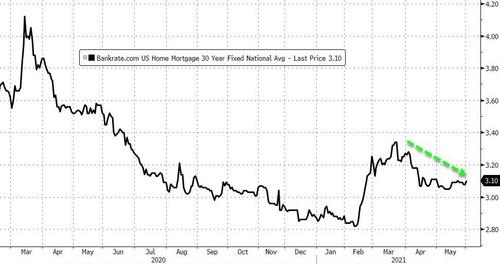 Even though housing prices growth will slow this summer (due to unfavourable base effects, a rebound in inventory, the end of foreclosure moratorium and mortgage forbearance), the trend will gain traction in the short term. According to my proxies, the S&P Corelogic index for April — that will be released on June 29th — should increase by more then 14 percent on a YoY basis.

Focusing on monetary, the debate concerning MBS purchases from the Fed will gather more attention in the coming months. It will likely result in tapering before year-end… and go back up to the first chart above to see what happened then. 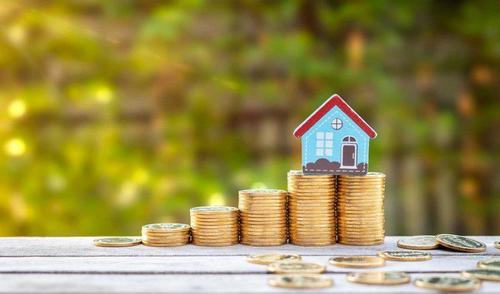 As Kara Cox concludes so poignantly, it is only in retrospect in which everyone saw it coming, knew it couldn’t last, etc. We didn’t, for the most part. It is easy to look back with derision about the Dutch and their bout with overpriced tulips, but is that so much different than what happened with Pets.com? Or when folks rushed to own homes in 2005?