As Bill and Melinda Gates divorce shocks corporate America, even capturing the attention of main street given their status as a preeminent global power couple, many observers have been looking for parallels between the Gates split and the “de-coupling” of Jeff and MacKenzie Bezos. Ultimately, MacKenzie agreed to walk with $38 billion, the biggest divorce settlement ever. It’s widely expected that Melinda Gates could walk away with even more. 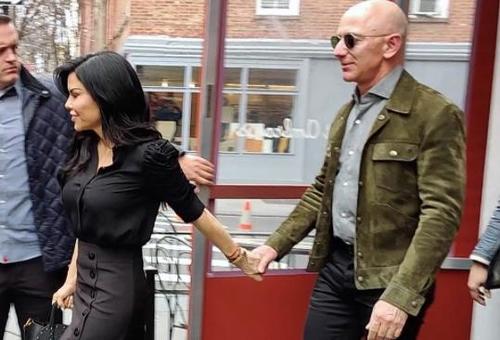 As the world scrutinizes the Gates situation for similarities and differences with the Bezos split as (however the couple’s assets are divided could have an impact on the share price of numerous companies) Bloomberg on Wednesday published an excerpt from a new book by Brad Stone, the tech writer and author known for his coverage of Amazon.

In his new book, Stone reminds the world just how dramatic the Bezos divorce saga was. Almost from the beginning, tabloid stories about Bezos’ relationship with Lauren Sanchez, triggered a PR battle that pitted Bezos against a suite of adversaries, including President Trump, National Enquirer publisher AMI, and the Saudi Royal Family (and Crown Prince Mohammad bin Salman) who were miffed about The Bezos-owned Washington Post’s coverage of the killing of Jamal Khashoggi, a former WaPo opinion contributor.

But as Stone reports, while Bezos came out on top in the affair, successfully portraying himself as the victim of a lurid plot to embarrass him by exposing his personal life, he largely has only himself to blame for how it all started.

The Bloomberg excerpt starts with Bezos addressing the tabloid reports about his divorce and relationship with Sanchez. As has been previously reported, Bezos and his wife grew apart when he started attending glitzy Hollywood events. Sanchez, the wife of a prominent venture capitalist, was more than willing to accompany Bezos on the red carpet. One source described her as “basically the opposite of MacKenzie”.

Now, facing Amazon’s leadership group, the S-team, Bezos addressed the elephant in the room. “The story is completely wrong and out of order,” he said. “MacKenzie and I have had good, healthy, adult conversations about it. She is fine. The kids are fine. The media is having a field day.” Then he tried to refocus the conversation on the matter at hand: personnel projections for the current year. “All of this is very distracting, so thank you for being focused on the business,” he said.

News of the affair came as “a shock” to many Amazon executives. But some couldn’t help but wonder about his motivations when he started pushing the board to consider a proposal to introduce a new class of shares that would help Bezos amplify his control of the company, something that would help him cement his dominance of the board even after giving up some of his stake.

By 2018, a year before the divorce, Bezos and Sanchez were seeing each other more or less openly. Bezos would occasionally be seen squirering Sanchez to the Washington Post’s printing press, or to visits at Amazon headquarters in Seattle, or elsewhere around his vast empire.

At some point, Bezos grew comfortable “sexting” with Sanchez, she was, unbeknownst to him, sharing his sexts and some of his texts with her brother, Michael Sanchez, who would later leak them to tabloids and emerge as one of Bezos’ chief antagonists in the drama, along with President Trump, the Saudi Royal Family (chiefly Crown Prince MbS) and the National Enquirer.

In the end, Sanchez sold out his sister and her boyfriend to AMI, the publisher of the National Enquirer and other tabloids, for a $200,000 payout, among the highest sums ever paid by the company for exclusive celebrity photos.

Even after paying, AMI sat on the story for weeks as it mulled whether publishing would be a smart move for the business. The company had just inked a non-prosecution agreement for killing negative stories about President Trump during the campaign, and the prospect of being sued by the world’s richest man made AMI publisher David Pecker extremely nervous, even as he praised a draft of the story as the “best piece of journalism” the magazine had ever published.

Sanchez helped the Enquirer shape the story for months.

For the rest of that fall, the Enquirer worked on the story with Michael Sanchez’s help. He emailed the paper more photographs and text messages and tipped off editors to the couple’s travel plans. When he had dinner with Bezos and his sister at the Felix Trattoria restaurant in Venice, Calif., on Nov. 30, two reporters were stationed at tables nearby as photographers clicked away surreptitiously. On the promised explicit selfie, though, Sanchez seemed to equivocate. He arranged to share it with Howard in L.A. in early November, then canceled the meeting. A few weeks later, on Nov. 21, after Enquirer editors kept hounding him, he finally agreed to show it to Simpson while Howard and Robertson watched via FaceTime from New York.

Amusingly, he has developed a detailed rationalization for why none of this constitutes “selling out” his sister – and that by cooperating with the tabloids, he was actually helping Bezos,

None of this, Sanchez claims, was a betrayal of his sister. She and Bezos were conducting their relationship out in the open, and it was only a matter of time before their families and the larger world discovered it. “Everything I did protected Jeff, Lauren, and my family,” Sanchez later said in an email. “I would never sell out anyone.” He also believed, naively, that his source agreement with AMI precluded the media company from using the most embarrassing material he had provided them.

On one issue, at least, it appears that Sanchez didn’t betray his sister. He later told FBI investigators that he never actually had an explicit photograph of Bezos in his possession. In the FaceTime meeting on Nov. 21, Sanchez didn’t show a picture of Bezos at all. It was a random photograph of male genitalia that he’d captured from an escort website called Rent.Men.

According to Bloomberg, the rumored Bezos “dick pick” is actually a fraud. As for the involvement of Saudi Arabia and Trump, we already know that MbS was spying on Bezos after hacking his phone with a phishing text. But while the National Enquirer did try to pressure Bezos to make a statement saying their coverage wasn’t politically motivated, any links to Saudi Arabia were murky, at best. It all culminated with Bezos shocking Medium post, published in February 2019, where he shared copies of his correspondence with the Enquirer. This forced the tabloid to back down since it raised the possibility of political and legal blowback.

Bloomberg’s excerpt ends with a glimpse of the megayacht that many suspect is being built outside Rotterdam for Bezos.

Employees now had even more reasons to wonder. What did the future hold for their founder? At least part of the answer to that could be found in the shipyards of the Dutch custom yacht builder Oceanco. There, outside Rotterdam, a new creation was secretly taking shape: a 127-meter-long, three-mast schooner about which practically nothing was known, even in the whispering confines of luxury boat builders—except that upon completion, it will be one of the finest sailing yachts in existence. Oceanco was also building Bezos an accompanying support yacht, which had been expressly commissioned and designed to include—you guessed it—a helipad.