How Brazil Is Saving The World From A Catastrophic Food Crisis

Authored by Augusto Zimmermann via The Epoch Times,

Brazil is the fourth-largest producer of food in the world. The country is entirely self-sufficient in basic foodstuffs, and it ranks as the world’s number one producer of banana, cacao, cassava, coffee, corn, maize, rice, soybean, and sugar. Although the bulk of these products are consumed domestically, a considerable part is also exported, including oranges, palm oils, garlic, peanuts, tea, etc. 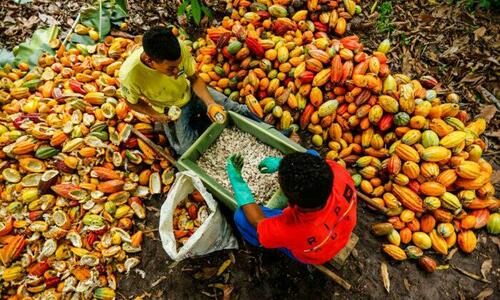 But Brazil needs a steady supply of fertilizers to power its mighty agricultural industry. The country’s largest international supplier of fertilizers is Russia, which accounts for 44 percent of the total Brazil consumes each year.

Since the war in Ukraine began, Brazil’s President Jair Bolsonaro said his country would remain neutral. He met with Russia’s President Vladimir Putin in Moscow on Feb. 16, and on the occasion, President Bolsonaro stated: “We are eager to cooperate [with Russia] in various fields. Defence, oil and gas, agriculture. Brazil stands in solidarity with Russia.”

As one may expect, this visit to Russia was heavily criticized by the U.S. government because it took place in the midst of Western tensions with Russia over Ukraine. However, Bolsonaro did not back down. 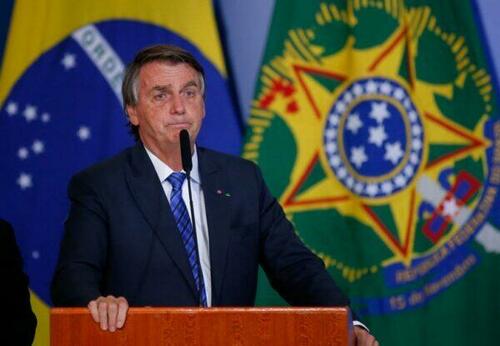 Brazil’s President Jair Bolsonaro speaks during a ceremony at the Planalto Palace in Brasilia, Brazil, on May 25, 2022. (Sergio Lima/AFP via Getty Images)

The Amazon is a huge bank of endless natural resources for Brazilians. It has the most significant percentage of sweet water, valuable minerals, and petroleum globally. It is no wonder the global elites are appealing to environmental issues in an attempt to undermine Brazil’s sovereignty over the region. In reality, environmentally protected areas in Brazil amount to an impressive 25 percent of its entire territory—50 percent in the Amazon alone. However, we are constantly witnessing a misinformation campaign about the deforestation of the Amazon.

On the other hand, it is also true that Brazil still needs to import 97 percent of the roughly 10 million tonnes of potassium it uses for crop production each year, making it the world’s largest importer. So, the fundamental question is: Where could Brazil find more fertilizers from?

The potassium reserves in Brazil are mainly on its Indigenous lands in the Amazon region. According to Márcio Remédio, director of the Geological Survey of Brazil, a state-owned company under the Ministry of Mines and Energy, “These reserves are world-class. They have the potential, if not more, than those in the Ural Mountains produced by Russia and Belarus, and also of Saskatchewan in Canada.”

In Brazilian Indigenous lands, only 3 percent of all these lands are deforested, a rate lower than on government and private lands. The Brazilian Constitution defines as Indigenous lands those traditionally occupied by Brazilian Indians, as well as “those used for their productive activities, those indispensable to the preservation of the environmental resources necessary for their well-being and for their physical and cultural reproduction, according to their uses, customs and traditions.” This description is so broad that an eminent constitutional law professor, Manoel G. Ferreira Filho, quipped that it would be easier if the Constitution had defined which land non-Indians could occupy.

Federal law in Brazil authorizes the exploration of mineral riches in the Indigenous lands. A share of the profit must be transferred to the relevant Indigenous community occupying the region, which cannot be removed from the land except in the extraordinary cases of catastrophe or epidemic. Even so, these Indians preserve the right to return to the land as soon as the risks cease. 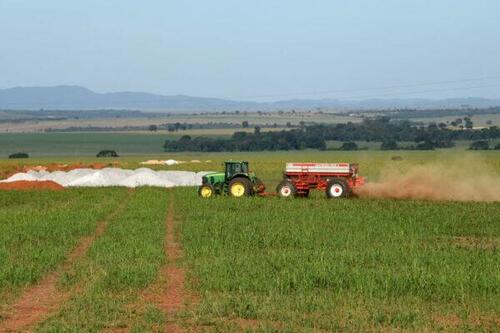 A tractor sprays stone dust in a field next to a pile of stone dust at the Vargem Dourada farm in Padre Bernardo, Goias State, Brazil, on May 19, 2022. (Evaristo Sa/AFP via Getty Images)

By making an agreement with Russia, Brazil has prevented potassium mining that could harm the Amazon and infringe on Indigenous rights and potentially saved the world from a catastrophic food crisis.

“If Brazil were to scale back next year because of a lack of fertilizer, that would certainly be bad news for a global food crisis,” says Joseph Schmidhuber, an economist who has studied the conflict’s impact on food for the United Nations’ Food and Agriculture Organisation.

The war in Ukraine, coupled with the West’s economic sanctions, have put the world’s food security at tremendous risk. These sanctions were meant to punish Russia for its invasion of Ukraine, but they are causing a serious danger to the world’s ability to feed itself.

In this sense, the Brazilian government has recently submitted to the United Nations’ Food and Agriculture Organisation an critical proposal excluding fertilizer products from any sanctions imposed on Russia. Brazil’s Agriculture Minister Tereza Cristina Dias has called on countries to find an international solution to the issue, noting that a shortage of fertilizers would provoke “food inflation and potentially undermine food security.”

To conclude, not only has the Brazilian government avoided a food crisis by replenishing the country’s stockpiles with the help of Russia, but it has also been playing a leading role in seeking international solutions to an emerging food emergency crisis that, in the worst scenario, could see millions of people dying from starvation, especially in the poorer countries.

That so being, the world should hope that President Jair Bolsonaro is duly re-elected by the Brazilians in the forthcoming presidential elections in October this year.