How Can These Two Trends Coexist?

Authored by John Rubino via DollarCollapse.com,

Before the pandemic, auto sales were booming, mostly because car loans were available to pretty much anyone with a driver’s license and a heartbeat. “Subprime” auto loans – which charge high interest rates and run for up to eight years (hence the nickname “car mortgage”) – accounted for about 20% of a $1 trillion+ market. 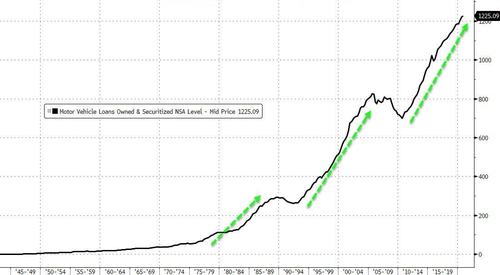 Not surprisingly, the past year’s lockdowns have popped that mini-bubble:

Risky Borrowers Are Falling Behind on Car Payments

A greater share of people with low credit scores has been falling behind on their car payments in recent months, a sign of stress among consumers whose finances have been hit hard by the pandemic.

Some 10.9% of subprime borrowers with outstanding auto loans or leases were more than 60 days past due in February, up from 10.7% in January and 8.7% a year prior, according to credit-reporting firm TransUnion. It marked the sixth consecutive month-over-month increase and the highest level in monthly data going back to January 2019.

More than 9% of subprime auto borrowers were more than 60 days past due in the fourth quarter, the highest quarterly figure in data going back to 2005.

But at the same time, this is happening:

(Zero Hedge) – The major automakers look to finally be back. And this time around, they’re selling EVs, too.

“The only explanation that I can even muster is that cars are 2021’s version of toilet paper in 2020,” said Chad Wilson, general manager of Wilson Ford in Saginaw and Midland Ford.

“We are taking a lot of retail orders because we don’t have anything (in stock). Normally between our two stores, we’d have 150-180 F-series in stock. I think right now there might be 10. I do think there’s an element of fear of missing out.”

GM said its U.S. retail deliveries were up 19% in Q1, the company’s first number reported against pandemic-impacted comps. The automaker sold 642,250 vehicles in the U.S. in the first quarter of 2021, according to Bloomberg. While retail sales were up 19%, fleet sales were down 35%
The automaker said its truck and full size SUV plants are currently at full capacity and that it’s seeking to recover lost car and crossover production in the second half of 2021.

Toyota sold 603,066 vehicles in the quarter, a 22% rise from Q1 2020, according to IBD. Even more pronounced was the company’s numbers for March, which were up 87% against the first month of coronavirus lockdowns in 2020.

Volkswagen also posted blowout comps, as sales rose 21% in Q1 to 90,853 vehicles sold. The company was helped along by robust SUV demand while also selling 474 units of its new ID.4, which only went on sale in the U.S. in late March.

So it looks like 1) the car market is still booming and 2) the thing that was driving the boom – subprime lending – is ending. 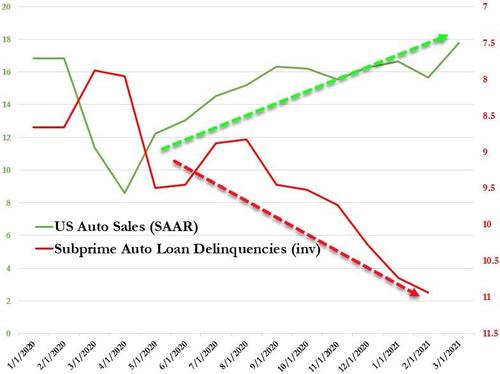 How can those two trends coexist? Because … inequality.

Lots of people are making lots of money out there, at the same time that lots of other people are too broke to cover their car payments.

As with so many other current problems, this is the result of a seriously screwed-up financial system AND the past year’s lockdowns, which have affected different groups in different ways. The very rich – who own the stocks and real estate that have soared on a tide of easy money – are thriving. The people who work online or who otherwise benefit from the “stay-at-home” e-commerce boom are also doing well enough to indulge in new cars.

But the people left behind by the destruction of restaurants, bars, and brick-and-mortar retail are poor and getting poorer. They were the folks who took out subprime auto loans and are now missing payments. So expect not just auto loans, but credit cards, personal loans, and apartment rentals to see spiking defaults in the coming year.

Since the gap between haves and have-nots was already a chasm before the pandemic, this sudden widening will be a potential flashpoint going forward. Put another way, the aristocracy had better make things right with the peasants before the latter storm the castle.

But therein lies the problem. Booming auto sales are a sign of an overheating economy (as are spiking prices for equities, houses, industrial commodities, and collectibles, among many other things). Such synchronized blow-off tops are usually followed by mirror-image busts which primarily hurt — you guessed it — the same people who were crushed by the lockdown. So the serfs get the shaft coming and going.

And it’s not clear that more easy money – the perennial tool of the 1% to enrich themselves while pretending to help the country at large – will do anything at all this time around.