How Long Can This Printing-Press-Money-Induced, Lopsided Trade Insanity Last?

Authored by MN Gordon via EconomicPrism.com,

Have you recently bought furniture, auto parts, clothes, electronics, plastic wares, doofers, doodads, or other doohickeys?  Chances are, they were made overseas. 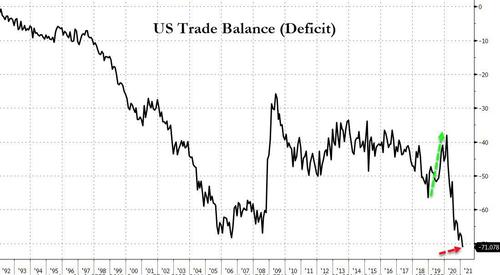 According to the Commerce Department, the U.S. imported $71.1 billion more goods and services than it exported.  Of this, $30.3 billion was from China alone.

What’s more, the month of February only had 28 days.  At a daily gap of $2.54 billion, had it been a full 31-day month, the monthly trade deficit would have been over $78 billion.  What to make of it…

The gargantuan trade deficit is a byproduct of the insanity of central economic planning.  Let’s follow the fake money and see where it leads…

The Federal Reserve creates credit from thin air and loans it to the U.S. Treasury in the form of Treasury bond purchases.  At the same time, commercial banks extend credit via fractional reserve banking.  The Federal Reserve encourages the over issuance of credit by artificially suppressing interest rates for extended time periods – often a decade or more.

This continuous flood of credit – the flip-side of debt – finds its way into stocks, real estate, and foreign made imported goods.  Some of it even finds its way into the absurdity of 75-inch flat screen televisions with sound bars.

Surplus trading partners, like China and Japan, then recycle the dollars back into U.S. Treasuries, thus, perpetuating greater debt creation – and an ever expanding trade deficit.  Many countries also engage in competitive currency devaluations – made possible by fake money – to garner a trade advantage.

The trade deficit, you see, is a function of fake money and expansive fiscal and monetary policies.  Without fake money, the trade deficit never could have blown out to today’s extreme, $71.1 billion monthly imbalance.

Nowhere is the insanity of central economic planning so visibly stark raving mad as at the Port of Los Angeles / Port of Long Beach (POLA / POLB) shipping complex.  The combined ports account for over one third of all U.S. imports.  We know the area well.  We pass through it every day. 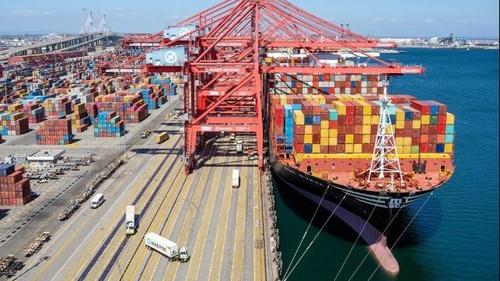 As context, the Southern California coast, from Orange County and into south Los Angeles County, extends up from the south and wraps to the west.  So, when standing on the shore in Long Beach and peering out at the Pacific Ocean you’re not looking west…you’re looking south.

The immediate body of water, which is naturally protected from the west by the blunted Palos Verdes Peninsula, is San Pedro Bay.  The bay is generally bookended by the San Gabriel River mouth on the east and the east facing extent of the peninsula on the west.  At about its midpoint is the terminus of the Los Angeles River.

San Pedro Bay is not entirely land protected like San Francisco Bay or San Diego Bay.  Its south facing orientation is naturally exposed to summertime south swells, which are generated by storms in the South Pacific near New Zealand and from tropical storms off the coast of Mexico.

Long Beach was known as the “Waikiki of Southern California” in the early 20th century because it had waves ideal for surfing.  This is hearsay for most residents.  No one has ridden a wave in Long Beach for over 70 years.

A massive 8.5 mile breakwater was constructed between 1899 and the 1940s, to seal off San Pedro Bay from the south.  This colossal breakwater structure supported the buildout of the massive POLA / POLB shipping complex.  Still, despite being mega in all ways, it’s not mega enough for fake money…

The colossal fiscal and monetary stimulus experiment that’s been executed by Washington and the Fed under the pretext of COVID-19 relief has stimulated the U.S. trade deficit with China.

In February, nearly 40 ships were at anchor and unable to dock.  This number has somewhat abated.  But it still remains around 30.  Moreover, with unremitting money printing now the overt policy of America’s central planners, this madness should continue through the year – possibly longer.

Attempts to accommodate the ever escalating volume of trade have been unsuccessful.  Just five years ago the majority of ships had a capacity of under 10,000 twenty-foot equivalent units (TEUs).  Presently, many of the ships at anchor have a capacity of 14,000 to 15,000 TEUs.  Some are even larger.

In September, after seven years of construction at a cost of $1.5 billion, the Gerald Desmond Bridge replacement was commissioned.  The prior bridge was too low to accommodate larger ships entering the Inner Harbor.

The new bridge structure, which has the highest vertical clearance of any cable-stayed bridge in the U.S., is a remarkable engineering achievement.  The two towers rise up to roughly 515 feet above mean sea level, and include 40 cables per tower.  The bridge’s linear extent is approximately 8,800 feet.  The cable-stayed span alone is 2,000 feet.

Construction included 18 million pounds of structural steel, 75 million pounds of rebar, and 300,000 cubic yards of concrete.  In addition to this massive bridge, berths have been widened, and channels have been deepened to accommodate the definitive absurdity of money printing and perpetual credit creation: The CMA CGM Benjamin Franklin.

This mega 18,000 TEUs container ship, if you’re unfamiliar with it, is over 20 stories tall, the width of a 12 lane freeway, and longer than four football fields.  It has enough cargo space to hold 90 million pairs of ‘Made In China’ shoes.

Journey To The End Of San Pedro Bay

Driving west from Downtown Long Beach, up and over the Gerald Desmond Bridge replacement, you are consumed by the massive – roughly 5-square mile – sea of piled up shipping containers.  They arrive full of imports, are unloaded and dispersed via rail and trucks, and then returned so they can be shipped back to China…largely empty.

To best observe the madness and folly of insane central economic planning, follow the east facing extent of the peninsula south and upward to Angel’s Gate Park.  There, high upon the bluffs at the southeastern tip of the Palos Verdes Peninsula, you’ve arrived at the end of San Pedro Bay.

At the center of Angel’s Gate Park, just south of the youth hostel, sits the Korean Bell of Friendship.  The massive bronze bell is positioned over a stone pavilion.  The imposing pyramidal roof structure, supported by twelve columns, is etched with ornate Korean zodiac animals and vibrant color patterns.

Immediately, beneath the ground where the bell sits are the old abandoned World War I bunkers of Fort MacArthur, named after Lieutenant General Arthur MacArthur – father of World War II General Douglas MacArthur.  Several remnants of massive gun battery emplacements are located immediately adjacent.  This site falls within the area of The Great Los Angeles Air Raid of 1942, where Los Angeles fell under – real or imagined? – attack from a squadron of Japanese bombers.

Winds gusts off the Pacific Ocean from three directions, explode up the face of the sea cliffs, and wildly swirl about the park’s crest.  Sweeping views of the mega POLA / POLB shipping complex fill the eastern scenic scape.  Catalina Island rises from the waters like a mountain berg to the south.

Peering over the bluff from Point Fermin Park, down to Cabrillo Beach, you can look directly east, downline of the breakwater.  A hodgepodge of marooned container ships dot the water.  The massive ports complex lacerates the eye to the north and east.

Behind that is the humble Long Beach skyline and the Convention Center, which, at this precise moment, is being rapidly transformed from a COVID-19 vaccination center to housing for upward of 1,000 migrant children.  On a clear day, the overconfident Los Angeles skyline, framed by the San Gabriel Mountains can be seen in the distance.

When the dollar collapse arrives, and trade recedes, the mega ports complex will quickly slip into disrepair and decay – perhaps, indefinitely.

The ancient Egyptians left the Pyramids and the Great Sphinx of Giza.  The pre-Columbian civilizations of the new world had their pyramids too.  Nearly, 1,000 monumental statutes were left by early inhabitants of Easter Island.  The Coliseum, Hadrian’s Wall, Timgad, Colosseum of Pula, Aqua Marcia, numerous arches, basilicas, and baths…the skeletons left by the Romans are immense.

Surely, the ruins of madness at POLA / POLB will provide a lasting monument to the folly of printing press money and insane central planning for future generations to scratch their heads over.