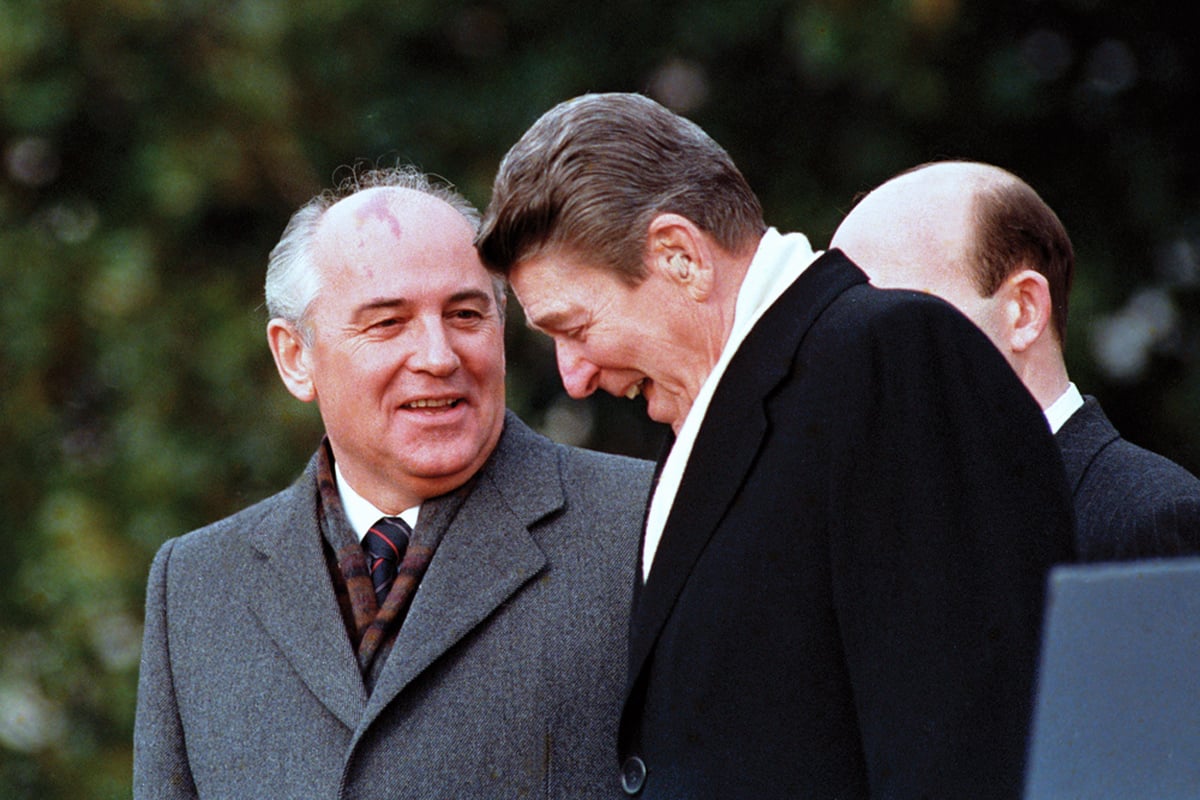 The death of the last leader of the Soviet Union, Mikhail Gorbachev, has, understandably, triggered an avalanche of tributes to the man who oversaw the dénouement of the Communist Bloc, and America and the West’s victory (by default) in the Cold War. What so many of these commentators forget is that both outcomes were entirely accidental, from Gorbachev’s perspective, and by no means are his leadership and legacy praised as fulsomely in his native land as they are in the West. For us, Gorbachev’s failures amount to his most signal virtues, but, since the Cold War was a zero-sum contest, that is only to be expected.

Gorbachev’s most important contribution to world history, it can be argued, was his stewardship of the Soviet Union in its death throes, when he narrowly beat back a coup launched by Communist hardliners and when the dangers of autocratic regression, and even military aggression, were very considerable. A cornered animal is, by all accounts, a dangerous one. A cornered and wounded animal is the most dangerous of all.

The purpose of this article is neither to praise nor condemn Mikhail Gorbachev, however, but to reconsider the consequences of the Soviet Union’s almost universally unexpected demise and of America’s greatest triumph: the crushing defeat of not one, but two, totalitarian ideologies in the 20th century.

Once the Soviet Union had been toppled, Americans and people throughout the West were inclined to celebrate, and indeed we did for a while enjoy lower defense costs, less exposure to the threat of nuclear annihilation, a tenuous monopoly on moral rectitude (amid a surge in the worldwide popularity of representative democracy and free enterprise economics) and a chance to refocus ourselves on meeting domestic challenges. For those in the USSR and Eastern Europe who were freed from Communist misrule, the gains were even more notable, even if the transition to Western-style democracy and capitalism was not always smooth.

What we tend to forget, however, is that 40-plus years of Cold War tensions, anxieties and burdens also came with major upsides. The technological advances that arose as a side-effect of Western versus Soviet competition in space exploration and weapons manufacture are well-known, but the chief advantage of our adversarial Cold War posture is rarely admitted: We were, for roughly two generations, largely united in facing down the threat of Communist aggression. Americans and Europeans, who could agree on little else, could and did come together to defend the West’s values, institutions, and territorial integrity from an odious form of imperialistic collectivism that was rightly seen as an existential threat, and all the more so when it acquired nuclear weapons and the capacity to deliver them on a gargantuan scale anywhere on the globe. And not only were America and Europe united in this noble quest, but so were, by and large, the Democratic and Republican parties in the U.S., and the liberal/progressive and conservative movements.

TRENDING: The FBI’s politicization and entrapment are not new

The Soviets gave us a very precious gift, therefore: a common enemy, and one which was tailor-made to capture our attention, to hone our focus, to motivate us to achieve new and evermore marvelous feats in the technical, industrial, economic,social-cultural and political domains, and to distract us from the centrifugal forces that might otherwise have overwhelmed us.

And therein lies the tragedy of Gorbachev’s accidental obliteration of his very own “evil empire.” Its consignment to the dustbin of history left triumphant Westerners like ourselves with no one to strive against and, just as importantly, no one to hate. No one, that is, but ourselves.

True, bloodthirsty Islamic terrorists and rogue state tyrants gave us a slight but scrumptious aftertaste of the moral certitude and sense of purpose we had enjoyed during the Cold War, but they were no substitute for the likes of Stalin, Mao and Brezhnev. To a large extent, therefore, since 1991, we Westerners have turned against each other to satisfy our moralistic and combative urges, and against even our own institutions, values and erstwhile heroes.

The rapid progress and popularization of cultural Marxism, the denigration of Western societies as racist, sexist, homophobic and systemically unjust, and the low esteem in which Western civilization, the U.S. Constitution, Christianity and capitalism are now held, all point to an insidious sickness permeating Western society.

We live in a time when young Americans view socialism more favorably than capitalism, and Gen Z is the most atheistic and agnostic in American history. Meanwhile, the professors and college administrators charged with inculcating the accumulated wisdom of the West, and sound moral values, in the rising generation are veering further and further left – left of Marx himself, in certain respects. Self-described conservatives are essentially absent from the leadership structures and faculties of higher ed, and elementary and secondary education is scarcely any better. Wokeness, cultural Marxism and identity politics are increasingly the dogmas on which our new civic religion is based. This kind of civilizational rot threatens to demolish the West far more effectively than Soviet tanks and apparatchiks ever could.

In short, the Soviet Union and communism’s defeat and destruction, and the triumph of America and the West in the Cold War, ironically stole from us our greatest strengths: our unity and our self-belief. Much as the USSR collapsed fundamentally because its own elite no longer believed in its foundational ideology, nor in the wickedness of its ideological foes, we too face obliteration, because our elites have also turned their backs on the institutions, values and principles that made the West what it is today.

When we are finally done celebrating communism’s downfall, therefore, we will have to face the unpleasant reality that, without an evil empire on which to fix our gaze, all we have left to look at is our own reflection. And, at least to our current ruling class, the picture that emerges is every bit as terrible and hideous as what they once perceived on the other side of the Iron Curtain. Their judgment is atrocious, needless to say, but that will be little comfort as they lead us to perdition.