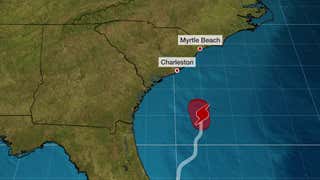 Hurricane Ian is tracking toward its final landfall today, packing threats of flooding rain, storm surge, strong winds and isolated tornadoes from the Carolinas into parts of Virginia.

Ian is located about 105 miles south-southeast of Charleson, South Carolina, and is moving quickly north-northeast.

M​ultiple roads have been closed because of flooding in the Charleston metro area this morning. Winds have gusted up to 40 mph at the airport.

Ian should make landfall as a Category 1 hurricane on the upper South Carolina coast this afternoon.

From there, it will weaken to a tropical storm by later Friday and become a remnant area of low pressure over North Carolina on Saturday.

A hurricane warning has been issued for areas along and near the coast of South Carolina, including Hilton Head Island, Charleston and Myrtle Beach, and for a portion of the North Carolina coastline northward to Cape Fear. This means hurricane conditions are expected in these areas on Friday.

A storm surge warning remains in effect along the Atlantic coast from the Flagler-Volusia County line in northeast Florida northward to Cape Fear, North Carolina, including Florida’s St. Johns River and also the lower Neuse River in North Carolina. This means life-threatening flooding from rising water moving inland from the coastline is expected.

Tropical storm warnings continue from part of eastern Georgia to much of South Carolina and most of central and eastern North Carolina.

The map below shows possible peak storm surge inundation, if that happens at the time of high tide, according to the National Hurricane Center.

Storm surge is expected to continue to cause flooding on the Atlantic side of northeast Florida and into coastal Georgia, South Carolina and eastern North Carolina on Friday.

Scattered power outages and some tree damage could occur in areas under hurricane and tropical storm warnings, especially in the Carolinas.

The map below shows where sustained tropical storm or hurricane force winds are ongoing as of the latest National Hurricane Center advisory.

Heavy rainfall is another dangerous threat from the Carolinas into Virginia and the Appalachians.

Here’s the latest rainfall forecast from the National Hurricane Center.

-Northeast South Carolina: 4 to 8 inches, with locally up to 12 inches.

-Upstate and central South Carolina, North Carolina and southern Virginia: 3 to 6 inches, with locally up to 8 inches.

The heavy rain in these areas could trigger flash flooding and river flooding. Farther south, major to record river flooding is expected to continue in parts of Florida into early next week.

Ian’s beginnings came from a tropical wave in the Atlantic that fought hard against dry air and wind shear caused by Hurricane Fiona.

Eventually, it became a major hurricane near western Cuba before bringing its extreme winds and storm surge to Florida.

The eye of Ian made its first landfall near Cayo Costa around 3:05 p.m. EDT. Maximum sustained winds were estimated to be near 150 mph, making it a strong Category 4.

This is the exact same point where Hurricane Charley made landfall in 2004 as a Category 4. Both hurricanes had winds of 150 mph at landfall.

Hurricane Ian made a second landfall at 4:35 p.m. in Pirate Harbor, or just south of Punta Gorda, with maximum sustained winds of 145 mph.

This landfall is tied for the 4th strongest landfall by wind speed for a hurricane in Florida, according to Phil Klotzbach, tropical scientist at Colorado State University.

The backside of Ian’s wrath continued to produce additional surge and wind damage in Southwest Florida for hours after landfall.

Winds gusted from 40 to 80 mph in Key West Tuesday into early Wednesday, where Ian also produced the third highest storm surge in over 100 years.

The highest wind gust was 140 mph in Cape Coral, Florida. The highest sustained winds reported were 115 mph at a private weather station near Port Charlotte, Florida. That station also recorded a wind gust of 132 mph.

Winds gusted over 100 mph in Punta Gorda, Florida, for 30 minutes in the 4 p.m. hour on Sept. 28 and continued to report wind gusts over 100 mph into the evening.

Here are some of the most significant gusts:

Additionally, winds gusted to 126 mph at Redfish Pass, 112 mph at the Naples Grande Beach Resort, and 107 mph near Sanibel Island.

Some gusts topped 70 mph in Northeast Florida on Thursday, including in Daytona Beach. Winds gusted to 89 mph at an elevated tower at Kennedy Space Center. Some gusts over 50 mph were clocked in Gainesville and Jacksonville, and over 30 mph gusts have worked their way along the coasts of Georgia and South Carolina.

Storm surge flooded many cities in Southwest Florida, including in Naples, Florida, where over 6 feet of storm surge inundation has been measured, more than any other storm at that gauge location in at least 50 years. The tidal gauge there has since broken.

In Fort Myers proper, however, storm surge was over 7 feet with high tide this evening. Previously the highest storm surge was 3.36 feet MHHW during Hurricane Gabrielle in 2001.

Meanwhile, winds are blowing offshore producing a blowout tide in Tampa Bay. Water levels are around 8 feet below average near the Port of Tampa and many parts of Tampa Bay were dry for much of Wednesday.

T​he combination of storm surge and rainfall around high tide sent feet of water into St. Augustine Thursday, with water reportedly entering homes, according to the National Weather Service. St. Augustine Fire Rescue reported water levels were higher in the city than seen during Hurricane Matthew in 2016.

E​xtreme rain triggered major flooding in parts of central Florida, prompting a flash flood emergency for the north side of the Orlando metro area near the Little Wekiva River. Orlando shattered its all-time 24-hour rainfall record, picking up 12.49 inches from 8 a.m. Wednesday through 8 a.m. Thursday, according to weather historian, Christopher Burt. Up to 19 inches of rain has already fallen in parts of the state.

Here’s a look at some of the flooding reports across Florida:

Heavy rain from Ian’s track across Florida sent some rivers in the Florida Peninsula to major, even record flood levels. Widespread flooding occurred on Thursday, Sept. 29 in the greater Orlando metro area.

The Peace River topped a record crest from 1933 at Zolfo Springs, about 60 miles north of Ft. Myers. Record flooding was also recorded in the Little Wekiva River near Altamonte Springs on Orlando’s north side, Shingle Creek at Campbell and Horse Creek near Arcadia, Florida.

12 Things You May Not Know About Your Hurricane Forecast

The Weather Company’s primary journalistic mission is to report on breaking weather news, the environment and the importance of science to our lives. This story does not necessarily represent the position of our parent company, IBM.