European natural gas and electricity prices are unlikely to ease in the coming months ahead of what could be a costly winter season for stressed-out consumers. The price increases for natgas and power are unusual for this time of year, raising concern prices will remain sticky and eat away wages.

Natgas prices hit a record high last month due to slowing Russian supply causing a storage crunch on the continent. Then the lack of wind-driven electricity production forced European utility companies to fire up natgas turbines to satisfy energy shortfalls. This episode underlines the precarious state of the continent’s energy markets ahead of winter. 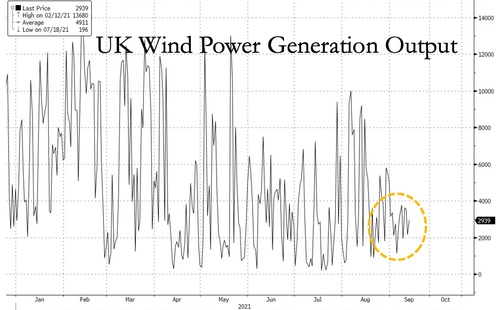 The price shock has been the most evident in the UK as the country learns a valuable lesson about relying on wind farms. Electricity prices have more than doubled in September and were seven times higher than at the same month in 2020. 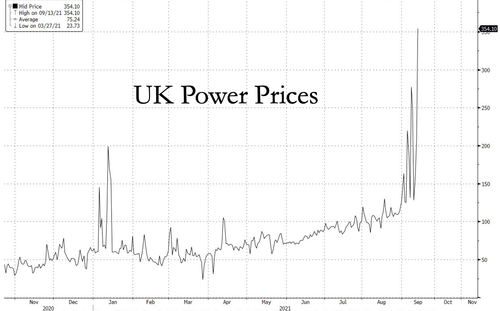 Power prices across the continent, from France, the Netherlands, and Germany, were also higher. 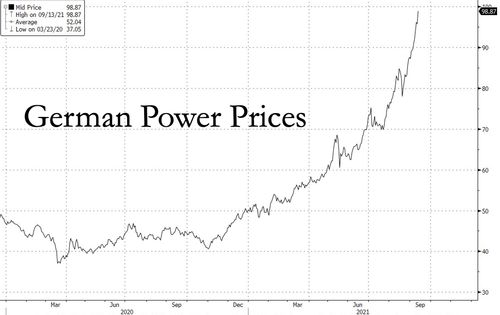 “All our indicators on the weather and the fuel market side are bullish,” said Georgi Slavov, head of fundamental research of broker Marex Spectron.

Bloomberg’s Javier Blas writes, “This is simply incredible: UK day-ahead baseload electricity prices jump to a fresh all-time high of £354 per MWh on N2EX. Intraday prices for peak demand are much, much higher. To put into perspective, that’s 700% higher than the ~£45 average 2010-2020 price.”

I hear some saying that Europeans are willing to accept higher electricity prices if it leads to a lower-carbon world. The above suggest that’s 1) no true, 2) governments will see lower tax income, with less money for green projects, 3) lower retail prices means higher demand

He notes commodity inflation has moved into “demand destruction mode — with that, it comes the risk of political intervention (verbal or real) to force prices down. We saw that with China’s statement on oil last week (and multiple times in 2008).”

Stefan Konstantinov, senior energy economist at data firm ICIS, said surging power prices “took a lot of people by surprise,” and if “this were to happen in winter when we’ve got significantly higher demand, then that presents a real issue for system stability.”

Maybe Europe will beg Russia to accelerate the launch of its controversial Nord Stream pipeline; clearly, without it, gas prices would continue surging, further pushing up power prices.

Europe has been pursuing renewable energy as a means of mitigating “climate change,” but the realization is that when the wind stops blowing, there’s not enough energy.

This is just more evidence of out-of-control inflation rippling through commodity markets and crushing the working-poor. Europeans are becoming furious and have already protested utility companies.