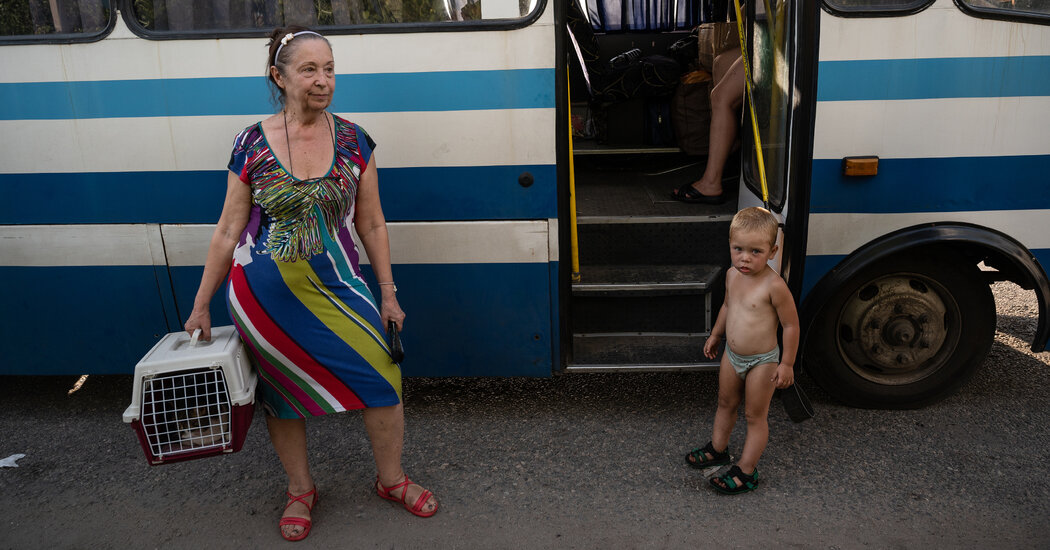 The director general of the International Atomic Energy Agency said on Monday that a team of nuclear experts was expected to visit the Zaporizhzhia nuclear plant in Ukraine later this week to ensure that crucial safety systems are working.

The I.A.E.A. had pressed for weeks for a visit to the plant, where shelling has raised fears of a nuclear meltdown. The plant is controlled by Russian forces but operated by Ukrainian engineers.

Experts with the United Nations’ nuclear watchdog conduct regular monitoring of nuclear sites around the world. The I.A.E.A. has said that at Zaporizhzhia its team would not only check on safety systems, but also assess damage to the plant and evaluate the staff’s working conditions.

Both Russia and Ukraine welcomed the announcement by the I.A.E.A. director general, Rafael M. Grossi. Mr. Grossi did not specify how the mission would reach the facility, which is in a region of southern Ukraine that has seen intense artillery strikes in recent weeks.

Russia’s envoy to the I.A.E.A., Mikhail Ulyanov, said the mission was “now on its way” and would station some experts at the Zaporizhzhia complex “on a permanent basis,” the state news agency RIA Novosti reported.

Officials from the United States, the European Union and the United Nations have called for a demilitarized zone around the plant, which has six light-water reactors. Ukraine and Russia have each accused the other of attacking the plant, which is Europe’s largest.

Dmytro Kuleba, Ukraine’s foreign minister, said on Monday that he expected the I.A.E.A. experts would conclude that Russia was putting “the entire world at risk of nuclear accident,” and repeated Ukraine’s calls for Moscow to withdraw its forces from the plant.

With shelling in and around the plant on a near-daily basis and an exhausted and stressed team of Ukrainian engineers tasked with keeping it running, the arrival of international inspectors was widely seen as an urgent step.

Negotiations to allow access went on for weeks, with Russia reportedly insisting that inspectors travel through Russian territory to access the plant. Ukraine objected because that would have underscored Russian control over the facility, which provides 20 percent of Ukraine’s electricity.

During an emergency U.N. Security Council meeting last week, Ukraine, the United States and their allies accused Russia of lying about who is responsible for the danger at Zaporizhzhia. Russia levied similar charges at them.

The plant has come under sporadic shelling since early August, although the extent of the damage remains unclear.

Plant employees and outside experts say an artillery strike would not penetrate the yard-thick reinforced concrete of the containment vessels over the six reactors, but could damage the reactors’ complex supporting equipment or spark fires that could burn out of control. Artillery strikes could also breach less robust containers used to store spent nuclear fuel.

Dmytro Orlov, the exiled mayor of Enerhodar, the Russian-occupied town near the plant, said that two neighborhoods in the city were hit by shelling overnight that he blamed on Russian forces. Energoatom, the Ukrainian nuclear energy company, said on Monday that the Russian shelling had wounded 10 residents of Enerhodar, including four employees of the plant.

Beyond the immediate vicinity of the plant, fighting has been raging along the entire southern frontline on both banks of the Dnipro River, including strikes on ammunition depots, towns and military bases.

Zaporizhzhia was temporarily disconnected from the nation’s power grid last week for the first time, Ukrainian officials said, after fighting severed a high-tension electrical line. Operators implemented emergency procedures to cool the reactor cores with pumps powered by diesel generators, but nearly all the Russia-occupied cities of southern Ukraine saw large-scale power outages before the line was repaired.

Fears of a possible radiation leak if the plant is further damaged have prompted Ukrainian officials to start distributing potassium iodide, a drug that can protect against some radiation poisoning, to people living within 35 miles of the plant.