President Joe Biden has something that he wants the public to know.

After the discovery of highly classified material in Biden’s former office, his garage and library, the President wanted to make one thing (and only one thing) perfectly clear: “I have no regrets.” 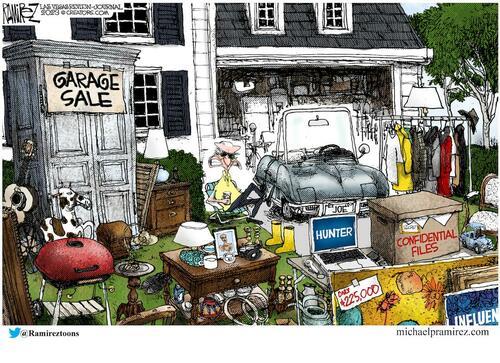 It was a moment that rivaled his disastrous observation that, while classified material was found in his garage, it is a locked garage that also housed his beloved 1967 Chevrolet Corvette Stingray.

While Biden’s “corvette standard” for storing classified documents was baffling, his declaration of “no regrets” is downright infuriating.  It is also remarkably moronic with a special counsel in the field. Either the President believes that Special Counsel Robert K. Hur will paper over the entire affair or he is doing his best to force his hand with a criminal charge.

Biden was miffed to be even asked about the matter after stonewalling the press for days. He ventured out of his White House bunker to tour storm damage in California and used the victims as a virtual human shield: “You know what, quite frankly, bugs me is that we have a serious problem here we’re talking about. We’re talking about what’s going on. And the American people don’t quite understand why you don’t ask me questions about that.”

The problem is that recent polls show that, while the President has no regrets, the public overwhelmingly does. Most citizens view his conduct as negligent. Roughly two-thirds believe that Congress should investigate the President, including a majority of Democrats. Sixty percent believe that he acted inappropriately with classified material.

Nevertheless, after days of hunkering down with this aides and polls, Biden decided to stick with total and absolute denial of regret or responsibility. It was not a surprise for many of us who have following Biden and his family through the years.

I wrote at the start of this scandal that Biden’s “silence” is hardly surprising. Biden has always been better at expressing revulsion than responsibility. Time and again, he has literally rushed before cameras to denounce others, often without basis, for alleged crimes. He has not waited for investigations, let alone trials.” When it has come to his own alleged misconduct, Biden will deflect, deny, but rarely declare responsibility.

The comments on Thursday were classic Biden. He first deflected by using the California victims. He then denied any real responsibility. Despite the appointment of a special counsel to investigate his conduct, he shrugged off the entire matter as something akin to finding a neighbor’s borrowed hammer from 2017 in his garage:

“We found a handful of documents were filed in the wrong place. We immediately turned them over to the Archives and the Justice Department …I think you’re going to find there’s nothing there. I have no regrets. I’m following what the lawyers have told me they want me to do. It’s exactly what we’re doing. There’s no there there.”

Of course, there is also a special counsel “there.”

Indeed, it is never a good idea to go public with expressions of no regret when you are being investigated on whether you took classification laws seriously. The statement was right out of the Alex Baldwin School of Criminal Defense in claiming that the gun did it. Fortunately, the President is not (yet) saying that the Corvette did it.

Since the standard is gross mishandling of classified evidence, the last thing you want to do is convey a grossly negligent attitude toward the discovery of highly classified material in your various private spaces. The President even added that he is “looking forward to getting this resolved quickly.” That quick resolution is less likely when you are telling the special counsel that this is no big deal. That is precisely the type of attitude that leads to classified material being stored with your corvette.

It is hard to imagine how Biden’s legal and political team would come up with this as the best approach when the President finally broke his silence. There is a difference between denying and dismissing an alleged crime. As a criminal defense attorney, I would be mortified by a client publicly dismissing the seriousness of a potential crime while he is under investigation. For most defendants, it would constitute “bearding the lion” and prosecutors would not take kindly to the approach.

Of course, the President could be counting on his prior declaration that “no one f**ks with a Biden.” However, he may be saying the quiet part out loud and putting Hur in an early and uncomfortable position. There is a “there there.” It is classified evidence in places like a garage. By stating that this is likely to wrap up quickly, Biden is not only showing little appreciation for the seriousness of the alleged crime but the seriousness of the investigation. He is not only making Hur look like a stooge or cipher. He is making Baldwin look like a comparative genius.