AN ESTIMATED 50million pumpkin pies are eaten every year on Thanksgiving and I went in search for the best one.

I tested out store bought pumpkin pies to see which one would make the cut for the Thanksgiving table.

Several companies work to meet that demand, cranking out millions of pumpkin pies every day.

And there’s also the choice to make between frozen or fresh.

The U.S. Sun decided to help make the choice easier by testing out four store bought pumpkin pies to see which is the best.

In this installment of our Bang For Your Buck series, we tried Sara Lee, Marie Callender’s, Mrs. Smith’s and Rocky Mountain pies. 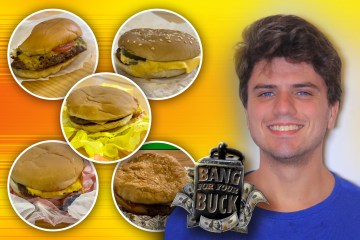 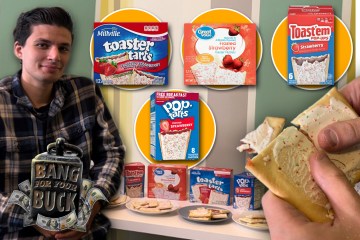 Although they’re all popular brands, which you can find at stores such as Target and Aldi, it was hard to find them because of the season.

While I was checking out from one of the stores the cashier told me I was lucky to find one as people had been asking about them all week.

We ranked each one on a scale from one to 10 in price, taste and size, with the highest combined score being 30.

This is how they scored from worst to best.

This was the smallest pie, but that wasn’t its biggest issue.

There was a strong artificial taste to this pie, but it didn’t list any artificial ingredients.

Unlike the other pies, this one had apple cider vinegar listed as an ingredient which could’ve been what tasted off.

The high price and small serving got it a four and three in those categories, respectively.

For taste, it got a five not only because of the taste of the filling, but the crust had an odd flavor too.

When this pie came out of the oven the crust looked way too dark. It definitely had a bit of a bitter taste, and it was a little flakier than a typical pie crust.

The filling was a little bland and had a similar consistency to baby food. For taste, it got a five.

This was the second largest on the list and less expensive than the 22-ounce Rocky Mountain pie. For price, we scored it a six, and for size, we ranked it an eight.

Although this was the most expensive pie, it was also the biggest. The high price was justified in this case, so we scored it a seven out of 10.

For size, it got a nine, and for taste, it got a seven. This one had a lack of pumpkin pie spices. While it was good and the crust was buttery, the spices would’ve made it all better.

This was the prettiest pie out of all of them. The crust was evenly baked and the filling set so nicely.

It also tasted incredible. The filling was smooth and you could taste the spices, but they weren’t overwhelming.

This was easily the best pie, earning it a nine in taste.

This is the least expensive pie on the list which shocked us because it was still a decent size. For price, we ranked it a nine.

The U.S. Sun reached out to the brands for comment.

The cost of holiday dinners is seemingly higher than ever due to inflation.

The inflation rate came in at 7.7 percent for October, according to the latest data from the U.S. Bureau of Labor Statistics.

Additionally, 42 percent of respondents plan to ask guests to help split the costs.

That said, many major retailers see where things are trending and are offering deals so you can enjoy Thanksgiving without blowing up the budget.

Overall, if you have a local Lidl near you – this may be the best place to purchase food for your Thanksgiving feast.

Lidl recently announced a $30 Thanksgiving basket, claiming it will be enough to feed 10 people. It offers a dozen products including a 13-pound turkey.

Meanwhile, Kroger has a wicked deal on a frozen whole turkey, costing just $5.85 in total and weighing between 14 and 16 pounds.

But Kroger announced that it’s offering a $50 meal for 10 people.

The U.S. Sun also has you covered for getting the best pre-made stuffing.

Plus, see if your favorite brand of instant mashed potatoes is the one giving you the best value.