If The Fed Is Fighting Inflation Why Is The Balance-Sheet Still Expanding?

Authored by Michael Maharrey via SchiffGold.com,

If the Fed is fighting inflation and has ended quantitative easing, why is its balance sheet still going up? 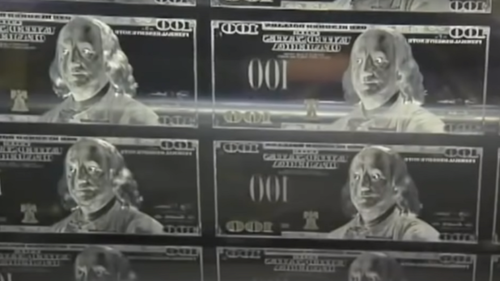 In the week ending April 13, the balance sheet grew by $27.9 billion, hitting a new record of $8.965 trillion. This is up about $3 billion from its previous high in March.

At the end of March, it looked as if the Fed had ended QE. The balance sheet fell between March 21 and March 28 but then increased slightly the following week prior to the nearly $28 billion increase last week. 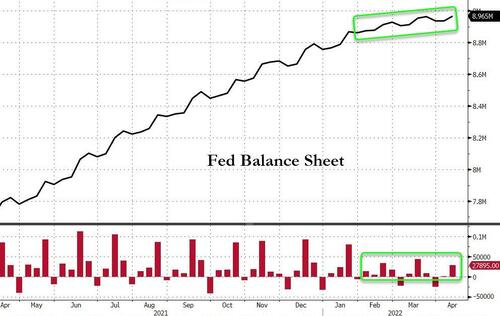 Looking at the graph, QE has clearly slowed down, but balance sheet expansion hasn’t stopped. Despite the taper having supposedly ended at the beginning of March, the Fed still appears to be running quantitative easing. In effect, the central bank continues to print money out of thin air to buy bonds. This is the exact opposite of fighting inflation.

We shouldn’t be seeing a growing balance sheet in the midst of historically high inflation.

Even if balance sheet expansion has slowed to a trickle, it continues to expand. Given the inflation problem and all the talk about fighting rising prices, you would expect the Fed to be shrinking its balance sheet. It certainly would be if it was serious about an inflation fight.

That raises a question: given the surging CPI, why wait to begin running off the balance sheet?

Because the Fed knows it can’t do it without tanking the entire economy.

This is the worst war on inflation ever.

To put that in perspective, the balance sheet stood at $4.16 trillion in February 2020, as the coronavirus pandemic started to unfold. That was up from a low of $3.76 trillion in September 2019, when the Fed gave up on tightening because the stock market tanked and the economy was getting wobbly.

That means most of the Treasuries the Fed bought in the first rounds of QE after the 2008 financial crisis remain on the balance sheet today — plus trillions more.

And we’re supposed to think the Fed is going to successfully shrink its balance sheet this time around?

It seems unlikely. Heck, it can’t even seem to finish the taper.