Authored by Lily Zhou via The Epoch Times,

The UK government will start informing some illegal immigrants this week of its intention to relocate them to Rwanda, the Home Office confirmed on Tuesday. 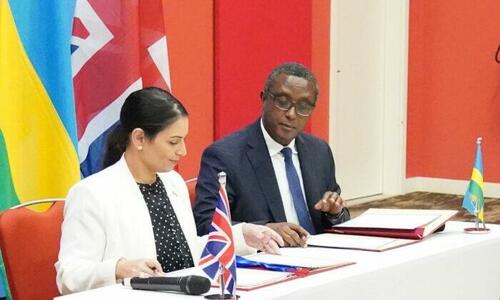 The recipients will be warned that they may not be admitted to the UK’s asylum system because they had “travelled through safe countries where they could and should have claimed asylum,” the Home Office said.

It also said that the government has the power to detain individuals pending their removal from the UK.

Under the UK’s new Nationality and Borders Act, those who arrive illegally in the UK who could have claimed asylum in another safe country—including those who crossed the English Channel in small boats—can be considered “inadmissible” to the UK asylum system.

The first flights shipping illegal immigrants to Rwanda under the UK government’s new Migration and Economic Development Partnership deal with the East African nation are expected to take off in the coming months, the department said, adding that lawyers for some of those affected will likely lodge claims to stop their removal.

Under the £120 million ($148 million) deal, some of the people who enter the UK illegally, including those who crossed the English Channel in small boats, are to be “relocated to Rwanda to resettle and rebuild their lives.”

Asylum claims made by these individuals will be processed in Rwanda, and successful applicants will be granted asylum or given refugee status in the country.

Some unsuccessful applicants will be allowed to stay if they are deemed to have other humanitarian protection needs. Others will be offered an opportunity to apply for other visas in accordance with Rwandan immigration laws.

Those who are neither recognised as refugees nor granted permission to remain on other grounds can be deported to a country in which they have a right to reside.

The deal also requires the Rwandan government to take “all reasonable steps” to “make a relocated individual available for return to the United Kingdom should the United Kingdom be legally obliged to facilitate that person’s return.” 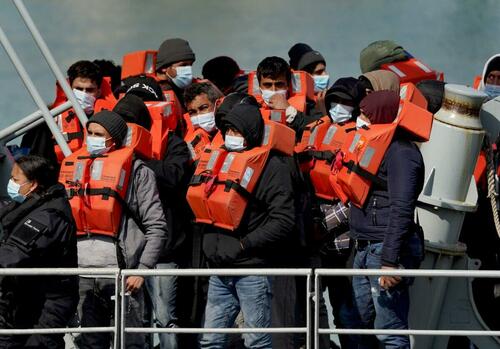 Undated file photo showing a group of people thought to be illegal immigrants are brought in to Dover, Kent, England. (Gareth Fuller/PA Media)

“Britain’s asylum system is broken as criminals exploit and smuggle people into our country at huge costs to UK taxpayers. The world-leading migration partnership with Rwanda means those making dangerous, unnecessary, and illegal journeys to the UK may be relocated to Rwanda to have their claims for asylum considered and to rebuild their lives there—helping break the people smugglers’ business model and prevent loss of life.”

The home secretary vowed she would “not be deterred from acting to deliver on the changes the British people voted for to take back control of our money, laws, and borders.”

The Home Office said it will carry out a case-by-case risk assessment when determining someone’s eligibility for relocation and take any vulnerabilities, including disabilities, sexual orientation, and gender reassignment status, into account.

Guidance (pdf) published by the Home Office on Monday evening setting out the main issues that a decision-maker should consider after a Notice of Intent is issued said while there’s “some evidence of discrimination and intolerance towards persons based on their sexual orientation and gender identity or expression,” it’s not “a systemic risk” or amounts to “persecution or serious harm,” noting the situation “may be different for trans persons.”

It also noted that it’s “unlikely” that a relocated immigrant would face a real risk from “some restrictions on freedom of speech and/or freedom of association” in Rwanda.

According to the guidance, an individual who fears mistreatment in Rwanda over “their ‘political’ associations or view” will need to demonstrate “how and why they would likely attract the negative attention of the Rwandan authorities” to avoid being relocated to the country.

Unaccompanied under-18s arriving in the UK will not be considered for relocation to Rwanda.

Anyone under consideration will receive a Notice of Intent, with the Home Office prioritising those arriving in the UK after May 9.

The UK is paying the processing costs for each person sent to Rwanda, including caseworkers, access to legal advice, translators, accommodation, food, health care, and up to five years of training to help integration.

On Friday, activists accused Patel of “racist” and “inhumane” policies and called on her to scrap the Rwanda deal during a speech she was giving at a Conservative Party dinner.

At least 7,739 people have arrived in the UK after crossing the Channel this year so far, according to a PA news agency analysis of government figures.