The U.S. Supreme Court on Thursday morning struck down a New York state gun law that made it difficult to obtain a handgun carry permit.

In an opinion penned by Justice Clarence Thomas, the court ruled 6-3 to strike down the New York law.

“Because the State of New York issues public-carry licenses only when an applicant demonstrates a special need for self-defense, we conclude that the State’s licensing regime violates the Constitution,” Thomas wrote for the court’s 6-3 majority.

The Supreme Court STRIKES DOWN a New York gun-control law that required people to show “proper cause” to get a license to carry a concealed handgun outside the home. The vote is 6-3. https://t.co/jA2Gl7lTiG

Thomas writes that the Second and Fourteenth Amendments protect Americans’ right to carry a handgun for self-defense.

The court holds that New York’s “proper cause” requirement to obtain a concealed-carry license violates the Constitution by preventing law-abiding citizens with self-defense needs from exercising their Second Amendment right to bear arms in public.

“In keeping with Heller, we hold that when the Second Amendment’s plain text covers an individual’s conduct, the Constitution presumptively protects that conduct. To justify its regulation, the government may not simply posit that the regulation promotes an important interest.”

What this could mean for the eight states that have “May Issue” concealed carry laws is a pivot to “Shall Issue” that requires fewer restrictions in obtaining a concealed carry permit. 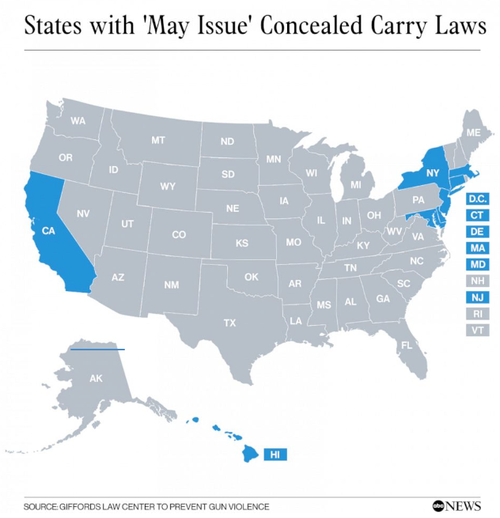 SCOTUSblog responds to the ruling by saying: “What a great day for our Constitution!”