It’s that time again when Jeffrey Gundlach, the billionaire chief investment officer and founder of DoubleLine Capital, holds his last webcast of 2021 for his DoubleLine Total Return Bond Fund where he touches on numerous market-linked topics. Readers can register for the webcast at the following link. The tile of the webcast is “in our time” referring to British Prime Minister Neville Chamberlain’s famous appeasement of Hitler before the start of WWII. 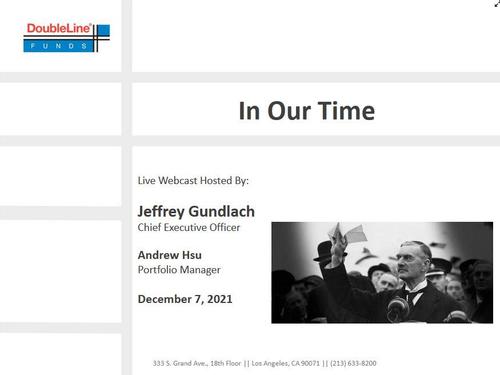 As Bloomberg reminds us, a lot of the issues Gundlach discussed in September’s webcast are likely to come up again today, especially inflation. Back then, he said he didn’t think history books would say inflation was transitory (he was right). He also said the Fed was distorting markets by keeping rates ultra-low with moves reminiscent of the 1970s. Gundlach also said TIPS looked “pretty expensive”, so it will be interesting what he says today. Inflation prints have been coming in hotter-than-expected since the last presentation.

Gundlach may wade deeper into DoubleLine’s concerns over the U.S. dollar’s role as a reserve currency. Last month, the firm warned the dollar was at risk of being “dethroned” by blockchain technology and stablecoins.

As most know, Gundlach has been a staunch critic of Fed policy, and it will be interesting to hear his interpretation of the recent flattening of the Treasuries yield curve, which as we have repeatedly said is a clear signal by the market that it is engaging in a “policy mistake” where it tightens too quickly or too strongly and ends up ruining the economic recovery.

Explaining why he titled the webcast “in our time”, Gundlach says that it’s because he’s been thinking about what’s been happening in society and we’re going to see some major changes “in our times”

Gundlach also likes the book by the same title by Hemingway, and also mentions Chamberlain’s “ridiculous piece of paper” which he waved when he said we have “achieved piece in our time” just months before the start of the great war.