On May 7, 2021, during the peak of India’s Delta Surge, The World Health Organization reported, “Uttar Pradesh (is) going the last mile to stop COVID-19.” 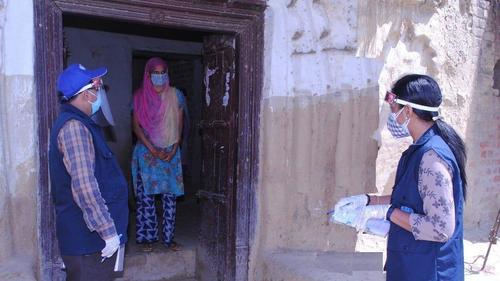 The WHO noted, “Government teams are moving across 97,941 villages in 75 districts over five days in this activity which began May 5 in India’s most populous state with a population of 230 million.”

The activity involved an aggressive house-to-house test and treat program with medicine kits.

The WHO explained, “Each monitoring team has two members who visit homes in villages and remote hamlets to test everyone with symptoms of COVID-19 using Rapid Antigen Test kits. Those who test positive are quickly isolated and given a medicine kit with advice on disease management.“

The medicines comprising the kit were not identified as part of the Western media blackout at the time. As a result, the contents were as secret as the sauce at McDonald’s.

The WHO continued, “On the inaugural day, WHO field officers monitored over 2,000 government teams and visited at least 10,000 households.”

This news story was published on the WHO Official Website in India. The website details the WHO’s work against COVID-19 in India, including a discussion about their “Online course for Rapid Response Teams.”

Such teams are the very government teams discussed above assigned to conduct the house-to-house test and treat program in Uttar Pradesh. In discussing the role of the Rapid Response Team (RRT), the WHO site reports,

“RRTs are a key component of a larger emergency response strategy that is essential for an efficient and effective response…WHO has produced and published this course for RRTs working at the national, sub-national, district, and sub-district levels to strengthen the pandemic response with support from the National Center for Disease Control, Ministry of Health & Family Welfare, Government of India, and the U.S. Centers for Disease  Control and Prevention.”

The Rapid Response Teams derive support from the United States CDC under the umbrella of the WHO. This fact further validates the Uttar Pradesh test and treat program and solidifies this as a joint effort by the WHO and CDC.

Perhaps the most telling portion of the WHO article was the last sentence, “WHO will also support the Uttar Pradesh government on the compilation of the final reports.”

None have yet been published.

Just five short weeks later, on June 14, 2021, new cases had dropped a staggering 97.1 percent, and the Uttar Pradesh program was hailed as a resounding success.

According to ZeeNews of India, “The strategy of trace, test & treat yields results.”

“The Yogi-led state has also been registering a steep decline in the number of Active COVID Cases as the figure has dropped from a high of 310,783 in April to 8,986 now, a remarkable reduction by 97.10 percent.”

On August 6, 2021, India’s Ivermectin media blackout ended with MSM reporting. Western media, including MSN, finally acknowledged what was contained in those Uttar Pradesh medicine kits. Among the medicines were Doxycycline and Ivermectin. 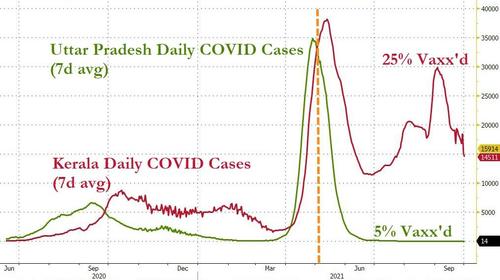 On August 25, 2021, the Indian media noticed the discrepancy between Uttar Pradesh’s massive success and other states, like Kerala’s, comparative failure. Although Uttar Pradesh was only 5% vaccinated to Kerala’s 20%, Uttar Pradesh had (only) 22 new COVID cases, while Kerala was overwhelmed with 31,445 in one day. So it became apparent that whatever was contained in those treatment kits must have been pretty effective.

News18 reported, “Let’s look at the contrasting picture. Kerala, with its 3.5 crore population – or 35 million, on August 25 reported 31,445 new cases, a bulk of the total cases reported in the country. Uttar Pradesh, the biggest state with a population of nearly 24 crore – or 240 million – meanwhile reported just 22 cases in the same period.

Uttar Pradesh had given over 6.5 crore – or 65 million – doses, the maximum in the country, but only 25% of people have got their first dose while less than 5% of people are fully vaccinated. Given the present COVID numbers, Uttar Pradesh seems to be trumping Kerala for the tag of the most successful model against COVID.”

This author reviewed the reasons behind Kerala’s failed treatment model in two articles, “The Lesson of Kerala” and “Kerala’s Vaccinated Surge.”

By September 12, 2021, Livemint reported that 34 districts were declared COVID-free or had no active cases. Only 14 new cases were recorded in the entire state of Uttar Pradesh.

On September 22, 2021, YouTube hosted a video by popular science blogger Dr. John Campbell detailing the Uttar Pradesh success story. He gave a breakdown of the ingredients and dosages of the magical medicine home treatment kit responsible for eradicating COVID in Uttar Pradesh. The same kit was also used in the state of Goa.

Dr. John Campbell broke India’s Ivermectin Blackout wide open on YouTube by revealing the formula of the secret sauce, much to the dismay of Big Pharma, the WHO, and the CDC. Readers will want to watch this before it is taken down. See mark 2:22.

Campbell reports that the exciting things in the kit that grabbed his attention were: Zinc, Vitamin D3, Ivermectin, and secondary antibiotic treatment. “Interesting, that’s what the government decided to give.” See mark 3:40

John Campbell has reviewed repurposed drugs for COVID before. He has interviewed both Dr. Tess Lawrie and Dr. Pierre Kory. Repurposed drugs hold the potential for benefitting many conditions, not the least of which include viruses and cancers.

Dr. Campbell noted that there had been no recent cases in 59 Uttar Pradesh districts. In addition, out of 191,446 tests completed in the previous 24 hours, only 33 samples were positive for a test positivity rate of only 0.01%. Dr. Campbell called this low number “staggering.” See mark 5:05.

By September, cases had fallen dramatically. Out of the entire state of 200 million plus inhabitants, only 187 active cases were left compared to the peak in April of 310,783 cases. See mark 5:41.

Dr. Campbell attributes their success to many factors, including early detection and early treatment with kits costing a mere $ 2.65 per person. See mark 6:20.

Notice that Dr. Campbell does not mention a single person who had any toxicity from those ten 12 mg pills of Ivermectin – in the entire state of over 200 million. Not one poisoning was reported. No Indian poison control articles or telephone calls were reported. Out of millions of distributed medicine kits, each containing 120 mg of Ivermectin, not one person in Uttar Pradesh was reported to have had a problem with the drug.

Notice that Dr. Campbell at no time criticizes the medicine kit as “fringe” or ineffective. After all, it would be improper to accuse a WHO-sponsored program such as the Uttar Pradesh test and treat – coordinated by WHO – of being “fringe.”

Contrary to what little we receive – at great expense – from the government in the United States, these kits are efficient and contain gloves, a thermometer, and an oximeter. The last time I purchased an oximeter some ten years ago, it cost some $200.00. This entire kit – including the oximeter – costs only $2.65.

And notice that a government can purchase over one thousand home treatment Ivermectin containing kits for the price of one course of Remdesivir. Remdesivir runs $3,100, and it is an impractical drug as it must be given late in the disease during hospitalization. Moreover, it is a drug that does not save lives.

On the other hand, the Ivermectin kits are highly correlated with eliminating COVID-19 in Uttar Pradesh. Indeed with less than 11% of their population fully vaccinated, the Uttar Pradesh model of test and treat is superior not only to Kerala, with a much higher percent vaccinated. Uttar Pradesh beats the UK, the US, and nearly everywhere else in the world in terms of the lowest active COVID cases.

Rather than turning a blind eye to Uttar Pradesh, perhaps it is time to analyze its success. It is time for all to realize that far from being dangerous, Ivermectin is safer than hand sanitizer or plain Tylenol, judging from the number of United States poison control calls.

Now is precisely the moment to point out that Dr. George Fareed, Dr. Peter McCullough, and Dr. Harvey Risch were correct in their U.S. Senate Testimony on November 19, 2020. They advised that early outpatient treatment was essential and would save hundreds of thousands of American lives if adopted. It wasn’t.

Now is the right moment to notice the onslaught of United States poison control articles attempting to smear Ivermectin, a drug proven safe and effective in the Uttar Pradesh test-and-treat program administered under the auspices of both the WHO and CDC.

It is appropriate to remind the reader that the WHO and CDC possess direct and recent knowledge of Ivermectin use for COVID-19 in India. Moreover, they know better than anyone the colossal effectiveness and overwhelming safety of Ivermectin used in those millions of Uttar Pradesh test and treat kits.

Perhaps it is also time to ask why exactly Dr. Tess Lawrie’s peer-reviewed meta-analysis was given an Altimetric score of 26,697, making it number eight out of some 18 million publications.

In other words, only seven articles in the world out of those 18 million are ranked higher.

This peer-reviewed paper is one of the most cited of medical references of all time – period. That should alert any reader – immediately – to its historical significance. Dr. Tess Lawrie is a 30-year veteran WHO evidence synthesis expert. Her conclusion is every bit as meaningful as the article’s rank. Here are those words,

“Moderate-certainty evidence finds that large reductions in COVID-19 deaths are possible using Ivermectin. Using Ivermectin early in the clinical course may reduce numbers progressing to severe disease. The apparent safety and low cost suggest that Ivermectin is likely to have a significant impact on the SARS-CoV-2 pandemic globally.”

Maybe it is time to ask why Dr. Pierre Kory’s peer-reviewed narrative review of Ivermectin ranks #38 out of the same 18 million publications.

He concludes, “Finally, the many examples of Ivermectin distribution campaigns leading to rapid population-wide decreases in morbidity and mortality reduction indicate that an oral agent effective in all phases of COVID-19 has been identified.”

Thus, both articles would rank in the rarified atmosphere of nearly one in a million.

Therefore, the reader must now ask why two magnificent independent reviews from two different continents, coming to the same conclusion, are both ignored by our world’s medical leaders?

Uttar Pradesh is one such population that experienced a considerable drop in COVID-19 morbidity and mortality months AFTER Dr. Kory’s article was published on April 22, 2021. Therefore, one must ask that if Ivermectin so predictably and safely eradicates COVID-19, then why is it not being systematically deployed over all the world, as Dr. Kory and Dr. Lawrie suggest?

Perhaps every reader needs to ask themselves this question – Why is it that BOTH Dr. Lawrie’s and Dr. Kory’s supremely-rated expert review articles, published in the medical literature on PubMed, the National Library of Medicine, are BANNED from Wikipedia?

Although India’s Ivermectin victory over COVID  may have been lost on bent-on-vaccinating-everyone Big Pharma and Big Regulators, the message seems to have gotten through to the man on the street. If Google Trends is any indicator, interest in Ivermectin is exploding, and for good reason. We are all being systematically deceived by influential organizations in the name of profits.

A daily onslaught of media propaganda bombards us with messages attempting to steer us away from the safest and most effective treatments.

Interest in Ivermectin and India is only increasing and has now reached an all-time high. 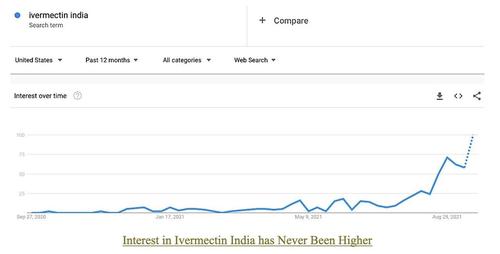 India’s conquest of COVID-19 is concealed no longer. The secret is out.

And perhaps, at long last, that much-anticipated WHO Final Report detailing the most successful Pandemic campaign of any place on earth will be published.

Justus R. Hope, M.D. is the author of the book “Ivermectin for the World”, released as a call to action for the use of Ivermectin to end the humanitarian crisis in India with the COVID-19 Pandemic