“Inflation Has Peaked”: Here’s What To Expect In Tomorrow’s CPI Report

With the massively illiquid market poised on the edge of the negative gamma abyss, tomorrow’s CPI print could easily crash stocks if the number is above the consensus estimate of 8.1% (for headline, 6.0% for core), or alternatively could spark a huge bear market short squeeze. The extremely binary outcome is why there has been so little conviction and liquidity in stocks in recent days, as few traders were willing to put on material risk ahead of the print.

So what to expect? Here, opinions differ with most forecasting that inflation will have peaked in March largely due to base effects, however, the rate of its decline from here on out is unclear.

Starting first with the skeptics, surprisingly we find JPM economist Michael Feroli with one of the highest estimates – at 0.4% M/M and 8.3%Y/Y, he is above Street consensus (if below last month’s prints of 1.2% and 8.5%). In Feroli’s view that we may have one or more elevated prints before we start to see a significant decline in official measures of inflation.

According to JPM economists, energy prices look to have come off somewhat in April following their March surge, and he believes that the energy CPI declined 0.2% in April. But this decline could be offset by another strong increase in food prices (forecast: 0.8%) and another solid gain for the ex.-food and energy core index (forecast: 0.39%).

While JPM’s headline forecast is above consensus, its core view is below: in April, JPM expects core CPI to drop from 6.5% to a still-strong 5.9%. Here, Feroli says that while “price increases for the rent measures have been solid lately, helping push headline and core inflation higher” he thinks April increases were similar to the rent trends, with tenants’ rent up 0.47% and owners’ equivalent rent rising 0.43%. While that may be true, it is now clearly the case that asking rents have peaked and are declining on a Y/Y basis as the following chart of data from Apartment List shows. However, since the BLS owner’s equivalent rent series lags about 5-6 months, we may still see some residual increases in April and/or May. In any case, those seeking real-time trends, we have clearly hit an inflection point and the coming sharp slowdown in US consumption and/or recession, assures that within a few months, rents will stop growing on a Y/Y basis. 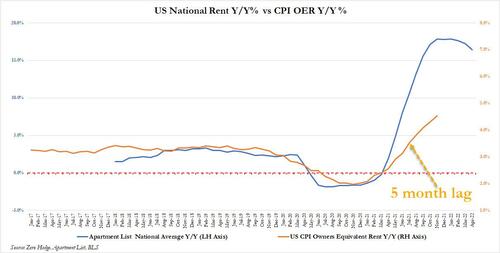 Compared to JPM, Bank of America is somewhat more cheerful, and looks for core CPI to rise 0.3% mom in April, which would reflect a similar increase as in March and would come in below consensus expectations of 0.4%.  Due to significantly unfavorable base effects, this would result in a sizeable cooling off in yoy inflation to 5.9% from 6.4% in March.

Headline inflation should come in softer than core, edging up only 0.1% (0.07% unrounded) according to BofA. That’s because after boosting headline in March, energy prices are set to be a sizeable drag reflecting a decline in retail gasoline prices coupled with unfavorable seasonal factors. Meanwhile, food prices should remain hot. If BofA’s forecast proves correct, Y/Y headline inflation would drop to 7.9% from 8.5%, confirming March as the peak for Y/Y inflation.

Next, BofA notes that the composition of core inflation is likely to look close to March, with autos inflation a drag and underlying inflation stronger. Within autos, used cars should see another sizable contraction given the signal from wholesale metrics, while new car prices may accelerate. Both JDPower forecasts and Truecar data on average transaction prices showed a strong rebound in April after price cuts for three consecutive months. Note that new car prices will receive a methodology source update that will rely on JDpower transactions data. Meanwhile, BofA expects broad price gains across goods categories amid congested supply chains and rising commodity prices. 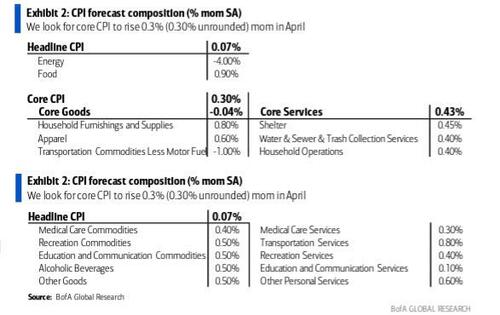 Like JPM, BofA expects continued strength in owners’ equivalent rent (OER) and rent of primary residence amid tight rental markets, with both gauges increasing 0.45% mom. Lodging prices are likely to post a modest increase after the past two months of strength. Airline fares are also expected to cool, as are broader transportation services. The latter will be underpinned by further price hikes in motor vehicle insurance. Medical care services may slow to a 0.3% clip as sequestration-related Medicare cuts are being phased in —1% in April, another 1% in July. Other major services categories should see steady gains amid tightening labor markets and rising wages.

Next, we hear from Goldman (whose CPI forecasts were absolutely catastrophic in 2021 so take anything here with a ton of salt). The vampire squid writes that core PCE inflation has run at a 3½% annualized pace over the last two months, a substantial deceleration from the 6% pace over the prior four months. The bank expects the annualized pace to reaccelerate to 4¼% on average in Q2 before falling back to 3½% in Q3 and 3¼% in Q4.

Here Goldman takes a quick detour to discuss the “three pillars” of its 2022 inflation forecast. 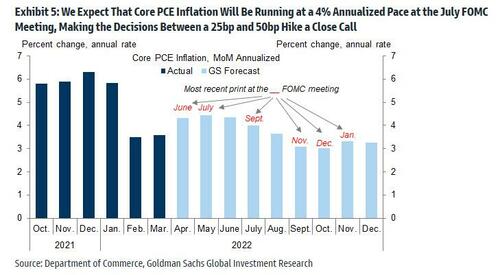 Some more details (from the bank which has a proven track record of being terrible at forecasting inflation):

Our base case is that inflation will reaccelerate from the 3½% annualized pace of the past two months to 4¼% on average in Q2, before falling back to 3½% in Q3 and 3¼% in Q4. The left panel of Exhibit 4 shows the contributions to month-on-month (not annualized) core PCE inflation by category under our forecasts. As described earlier, declining used car prices weighed on the February and March prints, but the slowdown also reflected softer financial, health care, and food services inflation—all three of which are included in the red bars for “Other Services” in Exhibit 4. We expect financial services inflation—which saw outright declines in February and March—to increase steadily over the rest of this year as intermediation spreads rise with higher interest rates. Health care and food services inflation are also likely to reaccelerate over the next few months in response to continued wage pressures and higher agricultural commodity prices, before moderating in the back half of the year as wage growth slows modestly.

The right panel of Exhibit 4 shows the contributions to year-on-year core PCE inflation. The lapping of last year’s large durable goods price increases means that the contribution to inflation from supply-constrained categories will shrink rapidly even in the absence of goods price deflation on a sequential basis and contribute to substantially lower core PCE inflation at year-end (we estimate 3.9% on a year-on-year basis).

Most other banks fall somewhere inbetween these observations.

Turning to markets, it is worth noting – as the Leuthold Group has done – that after freaking out in March following the Russian invasion of Ukraine, markets have calmed down and the bond market’s one-year forward inflation expectation have fallen fall below 5% and the two-year expectation drop slightly below 4%. “Those declines are some of the strongest evidence that overall inflation has peaked”, Leuthold writes. 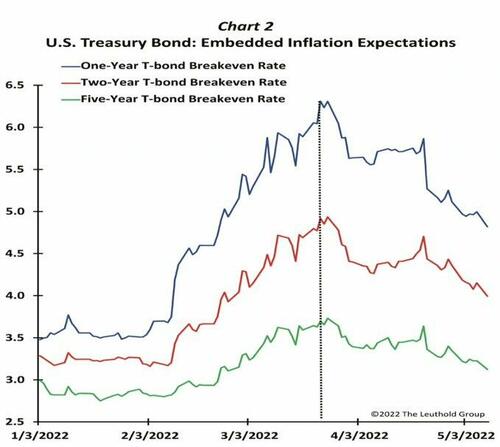 One reason for Leuthold’s optimism is that industrial commodity prices have tumbled in the past 4 weeks (largely on the back of the latest Chinese lockdowns), and investors haven’t discounted the meanting of this shift. 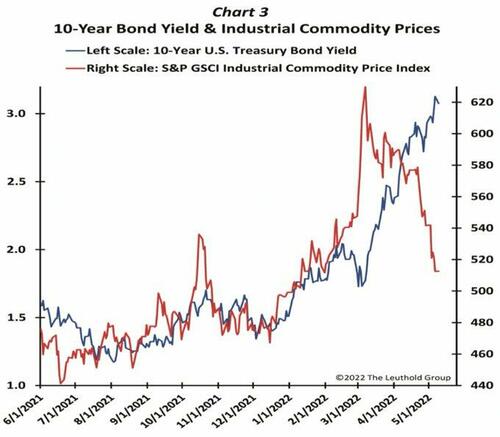 Of course, all of the above data does not exist in a vacuum and readers should recall that we will surely see headwinds from a monetary policy path that is intent not only on reining in inflation from here, but sparking a gentle recession in the US.

Sure enough, there was a distinct flip in the market today, because while bond proxies (such as financials, utilities and real estate) got hammered, bond yields tumbled. Meanwhile, industrials and Consumer Discretionary stocks are also lagging behind, which according to Goldman suggests that “the market narrative may be slowly shifting towards concerns of just a recession, not the stagflation (a recession plus inflation) concerns that have dominated market direction lately.”

That last sentence is key, because if indeed the Fed succeeds in sparking a recession in the near future, then all of the above is irrelevant and inflation will soon transform into deflation, unleashing the next easing cycle and QE.