Some employees at Bank of America are none too happy about the company waiving its bonus policy for veteran traders and dealmakers while keeping it in place for others.

The bonuses in question are shares that are granted to executives who earn $1 million or more. Instead of shares vesting in equal parts over a timeframe, they now all vest only at the end of four years. The new policy has caused “internal drama”, according to a report Monday by Bloomberg.

The new rules were supposed to be applied broadly, but it has been revealed that many top investment banking and trading veterans spoke out against having to wait 4 years for their bonuses. As a result, management agreed to exempt them. CEO Brian Moynihan said on January 27 that the new policy “didn’t work the way some people wanted it to, so we fixed it.”

But others at the bank, who were not exempted, have been “gathering on calls to vent frustrations and discuss options.” Bloomberg wrote:

The cliff-vest provision is especially problematic for long-serving executives in corporate and commercial banking who expected to qualify for what’s known internally as the “rule of 60.” Previously, Bank of America let staff retire with all deferred pay so long as their age plus a minimum of 10 years served at the company equaled 60. That treasured perquisite now excludes the new bonuses. 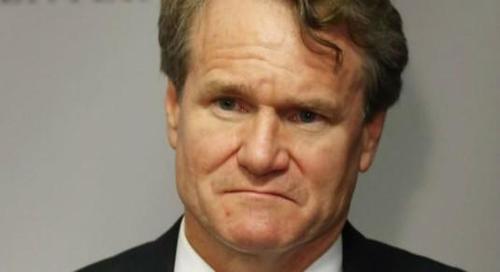 Some of those in corporate and commercial banking are part of a long standing division in the company that dates all the way back to the bank’s 2008 combination with Merrill Lynch, the report says. This rift, ongoing for over a decade, may be contributing to the internal chaos at the bank.

And while the bank – and many of its individual performers – had a great year, B of A had to triple its provisions for loan losses in anticipation of pandemic-related defaults, leading to net income falling 35%.

Moynihan said in January: “You’ve got to pay for performance, and the shareholder has to benefit, too. Our bonus pools are down year-over-year, yet some teammates made more money and some made less money.”

We noted several weeks ago that Credit Suisse had also slashed its 2020 bonus pool. We also reported late last year that bonuses at Goldman could wind up jumping 20% for some employees – namely its trading division. JP Morgan also reportedly boosted bonuses for sales and trading workers by 15% to 20%.

We pointed out at the start of this year that bonuses could fall “as much as 40%” and that “Wall Street firms are likely to cut pay for almost everyone and defer more of it to save cash.” Consultant Alan Johnson of Johnson Associates, said “great” employees could see a 15% decline in bonuses with “meaningful deferrals” and that “sub-par” employees could see bonuses drop 50% or more.

Johnson admitted the time is ripe for change: “Now is the time to get rid of the people you probably should have gotten rid of before. The industry has been carrying some extra weight for a while.”

Bank of America was managing expectations on its bonus pool as early as November last year, we noted. The message from within Bank of America was that senior executives were likely to keep the bonus pool for sales and trading desks at last year’s level, despite a solid year in revenue, jumping more than 20% in the first three quarters of the year.

BofA’s top leadership was said to be mulling over large bonuses because the virus pandemic had wreaked havoc over its consumer division department and added expenses.

Sources said some staff who expected to receive large bonuses for stellar performance are outraged.

“Executives still have time to lobby for larger payouts to top-performing desks, and may indeed wrangle more money,” the source added.

Meghan Markle ‘likes to move on’ and ‘anyone from past is a problem, ex-aide claims

New Covid lockdown rules from March 8 – what changes on Monday?