Iran says it has opened its first oil export terminal in the Gulf of Oman to allow Tehran to avoid using the strategic Strait of Hormuz shipping route that has long been a focus of regional tensions.

“Today, the first shipment of 100 tons of oil is loaded outside the Strait of Hormuz,” President Hassan Rohani said in a televised speech on July 22, calling it an “important step for Iran” that will “secure the continuation of our oil exports.”

The new terminal, located near the port city of Jask, will allow tankers headed into the Arabian Sea and beyond to avoid the Strait of Hormuz at the head of the Persian Gulf, through which one-fifth of world oil output passes.

Rohani said Iran aimed to export 1 million barrels per day of oil from the facility, which officials said will cost some $2 billion.

Oil Minister Zanganeh said that “82 percent of this project has been completed and so far more than $1.2 billion has been spent on this.”

Iran’s main oil export terminal is located at Kharg inside the narrow strait, which is patrolled by warships of its arch-foe, the United States. 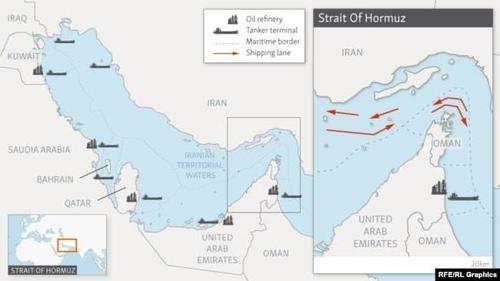 There have been periodic confrontations between Iran’s Islamic Revolutionary Guards Corps (IRGC) and the U.S. military in the area.

Iran has often threatened to block the Strait of Hormuz if its crude exports were shut down by U.S. sanctions, which have heavily impacted Iranian energy exports.

Washington reimposed the sanctions more than three years ago when then-President Donald Trump withdrew the United States from the 2015 nuclear deal between Tehran and world powers.

Tehran and U.S. President Joe Biden’s administration have been in indirect talks in Vienna since April to try to revive the agreement, under which Iran agreed to curb its nuclear program in return for the lifting of most international sanctions.