Yesterday, when looking at the latest hedge fund positioning data from JPMorgan’s Prime Brokerage, we pointed to a divergence which we said appeared “extremely bullish“, namely the near record collapse in rolling 4-week selling pressure among the North American hedge fund universe, which had completely decoupled not only from Treasury yields but also from the recent modest bounce in risk assets, as the smart money continued to “sell every rip.”

This is extremely bullish pic.twitter.com/e2PViTY8Ww

As JPM Prime explained, last month it introduced a Tactical Positioning Monitor (TPM) and “noted that it reached a very negative level by mid-March, which was followed by a rally in equities.” Well, currently, the TPM shows a fairly neutral set-up due to strong selling by HFs into the rally (-3z in N. America and largest selling since Covid onset in late Mar/early Apr 2020) offset by positive positioning shifts across various other components since the mid-March lows. However, the risk-off tone among HFs coincides with the hawkish pivot from the Fed and sizeable spike in US Treasury yields, JPM notes. And while that is correct, it was only a matter of time before there is a reversal lower in yields which would promptly activate a major melt up across the extremely bearish hedge fund positioning.

Sure enough, today’s market action confirms that at least for 24 hours or so, sentiment has turned and despite Bullard’s surprising admission teaser that a 75bps rate hike is coming, which has sent yields to fresh multi-year highs, stocks are roaring higher with bulls enjoying the best day in the market in the past month.

But positioning and technicals aside, has the worm turned and is it now time to turn bullish if only for a trade? According to Bloomberg reporter Alyce Anders,  here are 10 reasons behind today’s stock rally:

But while on the surface this all makes sense, the biggest concern is that the Fed itself is now a bearish catalyst, and should stocks continue to rise despite traders being aware that the Fed put is now a Fed call and ignoring clear appeals from Fed talking heads to sell risk assets (a warning which Bill Dudley made all too clear), it means that every incremental outburst by Fed talking heads from now until the midterms will be even more hawkish… although with Fed speakers entering a quiet period ahead of the May FOMC, the lack of jawboning may be the most bullish factor for the next two weeks.

That said, before bulls give themselves the all clear, a big red flag is that just one week after JPM’s resident permabullish cheerleader, Marko Kolanovic said that he was “taking profits“, and with stocks having done nothing but slide or, at best, move sideways…

… in his latest weekly note, the Croatian JPM quant writes that “while we slightly reduced our record equity allocation , we remain constructive on equities and think that a near-term rally is likely, particularly in small-cap and high-beta market segments” adding that “both sentiment and positioning are now too bearish, in our view.“

And just to underscrore that Marko is back to being “balls to the wall” bullish, as he has been every single seek this year with just one exception… 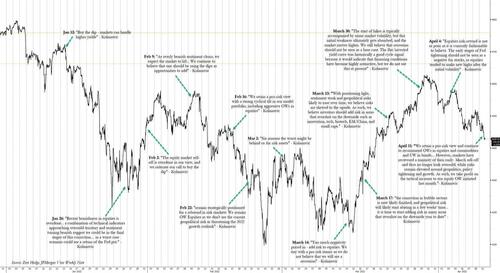 … he asks rhetorically what should one buy: “Growth or Value?” he responds that one can “construct a ‘barbell portfolio’ of traditional growth (e.g., tech, biotech, innovation) and traditional value stocks (e.g., metals, mining) that currently have favorable attributes across most traditional factors. This is rarely the case and currently possible due to a specific confluence of macro factors such as the commodity supercycle, divergent monetary policy, and very large selloff in high-beta and growth stocks (domestic and international) in the first quarter.” In short, buy everything… which should be the clearest signal that one should take chips off the table and go short.

Sarcasm aside, here is a far more objective assessment of the various forces currently in the market, this one from JPM’s flow desk. 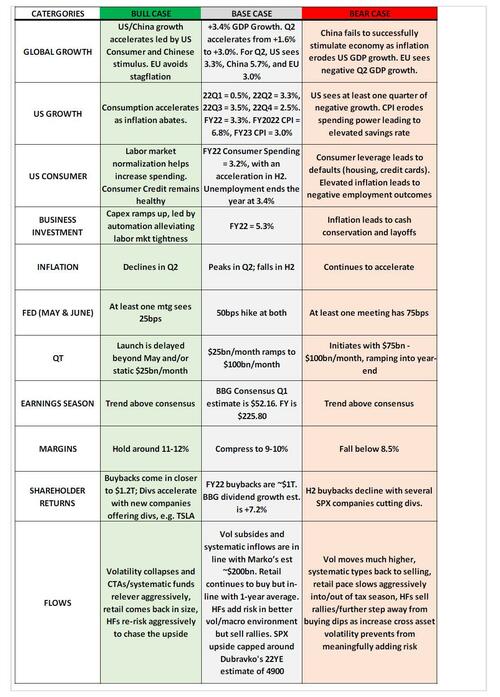 … and some additional observations on the three key cases.

And finally, here is the view of JPM flow trader Andrew Tyler:

I think the base case is compelling but with some upside risks. There is a sense among investors that a resolution to the Ukrainian War comes sooner rather than later. Assuming that is true, there will be near-term pressure on commodities, similar to what we witnesses Mar 14-15 and Mar 28-29 surrounding ceasefire chatter. If we see commodity prices fall, especially oil, then inflation expectations are likely to dissipate, too.

While this will not impact 22Q1 earnings season, the narrative around runaway inflation decreases and perhaps adjusts the market’s view on Fed hawkishness.

Mapping this view to data, keep an eye on the May CPI print, which could show a decline due to base effects. It was May 12, 2021 when we had the first elevated CPI print following the first stage of vaccination distribution. Fed speakers that Wednesday through the following Monday gave rise to the transitory inflation narrative, which created a near-term peak in 5Y/5Y inflation swaps as well as 5Y and 10Y breakevens.