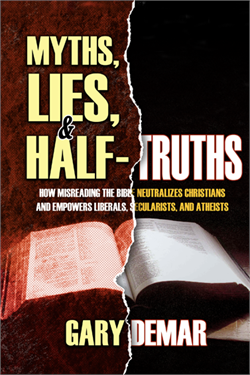 The following article, Is Politics Outside the Scope of the Christian Worldview?, was first published on The American Vision.

There’s a scene at the end of the film The Martian where Mark Watney (played by Matt Damon) lays out what is inevitable in space travel. It’s a lesson that can and should be applied to every area of life:

At some point, everything’s gonna go south on you… Everything’s going to go south and you’re going to say, this is it. This is how I end. Now you can either accept that, or you can get to work. That’s all it is. You just begin. You do the math. You solve one problem… and you solve the next one… and then the next. And if you solve enough problems, you get to come home. All right, questions?

A number of readers of the material published by American Vision often ask why we spend so much time on eschatology. Matt Damon’s brief speech is one reason why. Of course, it’s much more comforting to Christians if there is a “rescue in a rapture” than to die with no Earthly or Martianly hope.

Let’s get a few preliminaries out of the way concerning Christians and politics.

First, there is no doubt that there are few differences between the two major parties. When both Houses of Congress were owned by the Republicans, one would think that the claimed differences would have come out and the GOP would have fought for the principles they claim separate them from the Democrats.

This leads to the second observation. Many Christians believe their vote doesn’t make much difference even when their guy wins because their votes are overwhelmed by the GOP establishment majority that dilutes the effectiveness of the Constitutionalists.

Third, they are tired of sending people to Congress who promise one thing and then break that promise and offer political excuses for the votes they make. This happened in my district in Georgia in 2016. Rep. Barry Loudermilk voted for the 2000-page Omnibus Appropriations Bill even though it continued to fund Planned Parenthood to the tune of $500 million. There was so much pork in the Omnibus Bill that a devout Muslim wouldn’t touch the paper it was printed on.

“But you can’t beat something with nothing, so our delegation used the only currency they had [to get specific issues related to Georgia passed]: their votes for or against the Omnibus Appropriations Bill. Thankfully, Representative Loudermilk and the Georgia Delegation put their districts and state’s interests first, and harmful provisions were defeated as a direct result of their efforts.” [1]

Disillusionment sets in. But we don’t give up. We look for a better candidate. We raise up a more informed generation of Christian statesmen.

I am thankful that Donald Trump won in 2016. He has shaken up the Establishment in both parties and shamed many Republican “conservatives.” Trump is not perfect, but neither was King David. Every Democrat hates him and so do a lot of Republicans like Bill Kristol, Michael Steele, and White House counselor Kellyanne Conway’s husband and his  anti-Trump super PAC. Because Never-Trumpers profit from an ever-expanding national government and a corrupt alphabet soup of Federal agencies.

Fourth, millions of Christians are uninformed on issues like economics, education, and foreign policy. They’ve never been taught the foundational principles of the free enterprise system that’s based on the biblical law of “You shall not steal” (Ex. 20:15), even if a majority of people believe it’s OK.

Myths, Lies, and Half-Truths answers numerous objections that Christians often raise for not getting involved in worldview issues like education, journalism, politics, economics, and every other area of life.

Fifth, the following are some of the theological reasons many Christians do not get involved politically. They believe there are sound biblical reasons why they should avoid the endeavor altogether:

There’s so much more that could be said on this topic. I’ve covered the above topics and more in my book Myths, Lies, and Half-Truths: How Misreading the Bible Neutralizes Christians and Empowers Liberals, Secularists, and Atheists.

Continue reading Is Politics Outside the Scope of the Christian Worldview? …