Is The First US Bitcoin ETF Imminent?

For the longest time if you wanted exposure to bitcoin via a brokerage account, you only had one option: the Greyscale Bitcoin Trust. And while other names, like Square, Tesla and Silvergate now all offer some indirect exposure to the crypto, there has yet to be a direct way to gain access via public markets.

A big part of this has been due to the SEC’s stubborn unwillingness to list a pure bitcoin ETF – at a time when Bitcoin adoption has gone viral and even Canada recently launched its second Bitcoin ETF – though that regulation seems increasingly more antiquated now that corporate balance sheets are offering direct exposure to the crypto.

But all that is likely to change soon. In addition to a regulatory shift, Grayscale Investments appears to be prepping for an ETF by hiring an “entire ETF team”, according to Bloomberg. Greyscale has posted “at least nine ETF-related positions to LinkedIn,” the report notes.

Todd Rosenbluth, director of ETF research for CFRA Research, told Bloomberg: “The race to launch the first Bitcoin ETF is heating up. It’s more of a question on when the SEC will approve a Bitcoin ETF, not if.” 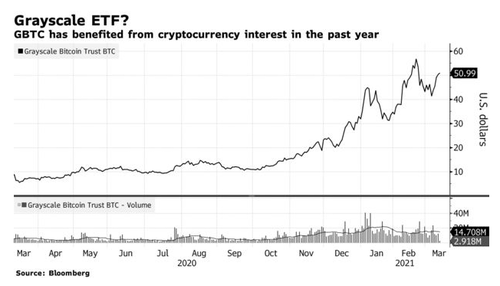 “First-mover advantage in the ETF space is tremendous, particularly when the underlying assets overlap. Whichever comes out of the gate first will have a leg up”, he continued.

Regulators are already in the midst of considering bitcoin ETF applications from VanEck Associates Corp. and Bitwise Asset Management. Greyscale does not currently have an open listing with the SEC, but it could roll its $35 billion bitcoin trust, GBTC, into an ETF easily. In Canada, the Purpose Bitcoin ETF got approval a day ahead of the Evolve Fund Group’s Bitcoin ETF and has exceeded its competitor in volume as a result.

Zac Prince, co-founder and chief executive officer of BlockFi, noted: “There’s more competition in the marketplace and in markets outside the U.S., in particular Canada, causing folks to think an ETF approval in the U.S. might be likely.”

Michael Sonnenshein, Grayscale’s chief executive officer, told Bloomberg: “We’re not able to provide further detail aside from the fact that we are continuously exploring new opportunities, such as an ETF, in response to customer demand. We were the first to provide exposure to a digital asset through a regulated wrapper, and our goal is to ensure that we lead the market in whatever future product we bring forward as well.”

But Rosenbluth says the creation of an ETF team telegraphs the future: “It signifies, one, that they are planning to file for an ETF and that they hope the approval process would be potentially quick and thus don’t want to miss out on hitting the ground running.”