As protesters and governments alike braced for another round of unrest during the coming weekend, with most of the US preoccupied by the Thanksgiving holiday, Italy’s increasingly authoritarian government has declared instead that a growing number of government workers will be subjected to vaccine mandates.

According to the new rules, unvaccinated people will not be able to enter venues such as cinemas, restaurants and sports events. 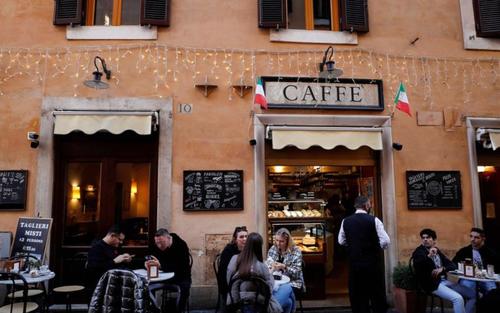 Stringent new rules further blur the line between a vaccine mandate and the status quo in Italy, potentially prompting another wave of protests, like those that swept across Rome and a handful of other European cities recently as governments intensified their restrictions on vaccinations with increasingly authoritarian policies.

According to the Italian newswire service Ansa, the Italian government, led by former ECB head “super Mario” Draghi, has decided to “tighten the screws” so to speak, on Italians who have been “unwilling” to get the vaccine.

Reuters reports that Draghi has sharply restricted access to an array of services, making vaccines mandatory for a wider group of public sector workers.

Italy acted as much of Europe is increasing restrictions to try to grapple with a new wave of the pandemic.

Under the Italian measures, which will come into force from Dec. 6, unvaccinated people will not be able to enter venues such as cinemas, restaurants and sports events, Prime Minister Mario Draghi’s government said in a statement.

Never one to avoid the press (unlike another world leader we could name), Draghi delivered a statement late Wednesday, claiming the situation in Italy is “getting worse” and that his government wanted to act before it was “too late.” “We want to be very prudent,” Draghi insisted, in a statement to Reuters.

“We are seeing the situation in bordering countries is very serious and we also see that the situation in Italy is gradually but constantly getting worse,” Draghi told reporters after the cabinet approved the new rules.

“We want to be very prudent to try to safeguard what Italians have achieved in the last year,” Draghi said, stressing the need to avoid a full-blown lockdown against the coronavirus that in 2020 caused Italy’s steepest post-war recession.

The government extended mandatory vaccination, already in force for healthcare workers, to all school staff, police and the military, beginning from Dec. 15.

Under the new measures, which will come into effect beginning on Dec. 6, unvaccinated people will not be able to enter venues such as cinemas, restaurants and sports events, Prime Minister Mario Draghi’s government said in a statement. What’s more, in addition third doses of the vaccine, so-called “boosters”, currently available to those over 40 years of age will be made available to everyone over the age of 18.