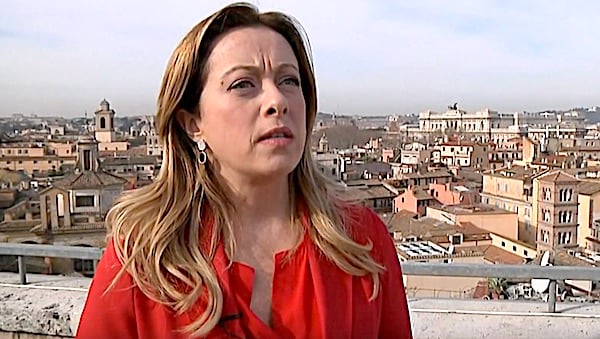 Conservatives romped to victory in Italy on Sunday and their charismatic leader, Giorgia Meloni, becomes Italy’s first female prime minister. Earlier this year she declared in perfect English that “the only way to be rebellious is to be conservative.”

Though her party garnered only 4.4% of the vote in Italy’s last election, in 2018, Meloni just led the Brothers of Italy to a landslide victory with its platform of “God, country and family.” This party is called “far right” for taking a strong stance against immigration and for an economic program that supports families with children.

Giorgia Meloni is as blunt-talking as Donald Trump, and is similar to American conservative women such as Marjorie Taylor Greene and Kari Lake. Unlike Republicans who immediately run to the center after conservatives elect them, Meloni boldly declared after her election that “this is a starting point, not a finishing line; from tomorrow we have to prove our worth.”

Trump adviser Steve Bannon is one of Meloni’s biggest fans, as Bannon recognized years ago her potential to take charge. Raised by a single mom in a gritty portion of Rome, Meloni was inspired by “The Lord of the Rings,” the Christian fantasy novel by J.R.R. Tolkien, as well as writings by the English Christian essayist G.K. Chesterton.

In less than 40 days the midterm elections here will reveal how far the United States will move to the right as Europe is doing. Like Italy, inflation here has been near 10%, and last week the Federal Reserve Bank jacked up interest rates by another 75 basis points.

Rapid increases in interest rates preceded the elections of 1980 and 2008, and the incumbent party was routed by election landslides. This year’s polling shows a recapture of the House by Republicans, while recent trends point to a possibility of recapture of the Senate also.

Most notably, in Nevada, long associated with the machine politics of the late Sen. Harry Reid, Republican challenger Adam Laxalt has opened up a lead over the Democratic incumbent. While national Democrats abandon working-class Latinos in order to appeal to college-educated women, Laxalt wins over the blue collar workers who make Las Vegas function.

Laxalt is running hard against Biden’s open border, and this is resonating with Nevada voters, including Hispanics. “Joe Biden and Democrats have dismantled border security, causing a crisis of human trafficking, crime and lethal opioids,” Laxalt’s latest television ad declares.

The ad features his opponent falsely claiming, “First of all, there’s no open borders” while Vice President Kamala Harris absurdly declares “Our border is secure.”

Nevada has never been a bastion of conservatism, and Republicans have struggled there in recent years. But a populist message against illegal immigration and other liberal plagues can oust an entrenched Democratic senator in the Silver State.

Like much of our country, Nevada has a worsening water shortage with no viable plan to overcome it. As Nevada’s attorney general, Laxalt joined other Western states in a lawsuit that successfully challenged a federal rule that would have kept residents from drawing water from their own private property.

Laxalt is running against the anti-energy positions of his opponent, who supports phony green energy rules that cannot possibly keep the tourist hotels air-conditioned on the famous Las Vegas Strip. Nevada was the fourth-best state in the country last year in terms of few power outages (West Virginia was the best), while next-door California was the third worst as radical environmentalists ruin that state.

In Pennsylvania, Trump-endorsed Dr. Oz is charging ahead and narrowing the lead by the leftist Democrat John Fetterman, who had a disabling stroke earlier this year but refuses to release his medical records as Dr. Oz has. Fetterman has ducked debating Dr. Oz but finally agreed to an 11th hour debate in late October, after many Democrats will have had their ballots harvested in early voting.

Republicans carry most of Pennsylvania’s counties, but the Democrats’ political machine in Philadelphia often yields more votes than expected. Republican legislators in Pennsylvania have failed to end election fraud, which makes Dr. Oz’s task more difficult than it should be.

The energy issue boosts Republican Senate candidate J.D. Vance in next-door Ohio, which should play well for Dr. Oz. Fetterman once pledged to ban fracking, on which Pennsylvania’s economy depends, and he backpedals on that issue.

Now Fetterman is campaigning for federal pro-marijuana legislation, even though most states outlaw it. As a highly respected physician, Dr. Oz can educate the public about how harmful that would be.