Authored by James Rickards via The Daily Reckoning,

The world was recently mesmerized by the ability of the Bros (short for “brothers”), a crowd of like-minded, mostly male millennials, to increase the price of GameStop from $20 per share to $400 per share in a matter of days. 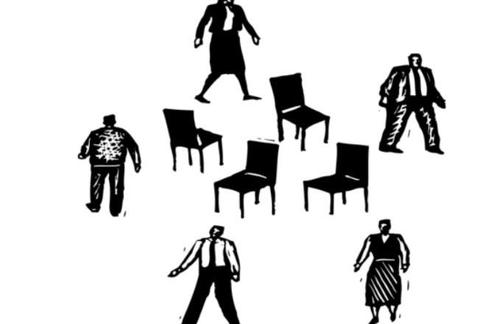 The fact that the Bros did this using stimulus check money and the Robinhood trading app did not diminish the sky-rocketing numbers behind the frenzy. The stock later collapsed by 80% (as bubbles do), but not before inflicting an estimated $20 billion of losses on hedge funds that were short GameStop when the ascent began.

That decentralized (but legal) pump-and-dump scheme came dangerously close to destabilizing the U.S. financial system. If hedge funds had failed (several almost did), those losses would have fallen on bank dealers and other hedge funds, which could have triggered a cascade of failing banks and funds worse than what happened in 2008.

That fire is out for now, but it was an interesting sideshow at the time. Once the power of the Bros was realized, every investor with a long position went to Reddit’s r/wallstreetbets (the favorite chat room of the Bros) to start touting other investments that they wanted Robinhood users to ramp up.

One of the investments pointed out to the Bros was silver bullion and the leading silver ETF, which trades as SLV.

A Game of Musical Chairs

For about 12 hours on Sunday, January 31, the price of silver rose 10% to $30.00 per ounce after several days of heavy trading and large gains. Then it settled back to around $27.00 per ounce, still higher than when the rise began.

The Bros had moved on from silver; perhaps they were too busy licking their wounds from GameStop after that ramp collapsed.

Still, the Bros may have been on to something. A recent analysis by market commentator Ronan Manly of BullionStar points out that there are serious shortages of silver in the physical bullion market.

Almost 85% of physical silver in the London market is already held by ETFs, which leaves relatively little to satisfy physical demand if it should arise on the commodity exchanges.

Typically, the silver futures traders on the commodity exchanges simply close out open contracts or roll them forward to another calendar month without actually demanding physical delivery.

But, if traders demanded physical delivery, which is permitted under exchange rules, there would not be nearly enough silver bullion to satisfy that demand.

Get in Line, Buster

In that case, the exchange would simply suspend physical delivery and require that market participants “trade for liquidation only.” This means you can close out your contracts and collect paper profits, but you cannot have the silver, and you cannot share in future profits without opening new contracts.

The scarcity of silver also means there is not enough bullion to satisfy further demand from the ETFs themselves or from banks that sell unallocated silver forward contracts not backed by actual silver.

An unallocated contract with a bullion bank means that you have price exposure but no actual silver backing up the contract. If you want physical bullion, you have to provide notice to the dealer bank and give them time to locate the bullion. Again, if this were done in more than small amounts, the banks could not possibly source that much silver.

Could there be a short squeeze underway in which those long silver futures contracts demand delivery, knowing full well that the exchange cannot meet the demand? Are silver ETFs selling shares for silver they cannot actually source in physical form?

In a dramatic development on February 3, 2021, the leading silver ETF, which trades as SLV, updated its prospectus to include the following language:

The demand for silver may temporarily exceed available supply that is acceptable for delivery to the Trust, which may adversely affect an investment in the Shares. To the extent that demand for silver exceeds the available supply at that time, Authorized Participants may not be able to readily acquire sufficient amounts of silver necessary for the creation of a Basket…

It is possible that Authorized Participants may be unable to acquire sufficient silver that is acceptable for delivery to the Trust for the issuance of new Baskets due to a limited then-available supply coupled with a surge in demand for the Shares.

In such circumstances, the Trust may suspend or restrict the issuance of Baskets. Such occurrence may lead to further volatility in Share price and deviations, which may be significant, in the market price of the Shares relative to the NAV.

In plain English, the SLV sponsor is candidly admitting that there may not be enough silver to support the issuance of new ETF shares, in which case, new share issuance may be suspended.

This would come as a shock to markets and could cause outright panic buying in silver. The short-squeeze would reach a critical stage.

Right now, my models are telling me that silver is poised for further significant gains after a relatively brief period of price consolidation.

Chart 1 below provides some insights into recent price action in SLV (which tracks the price of silver bullion closely).

These performance figures are comparable to the overheated and bubbly stock market. Silver outperformed gold in 2020. 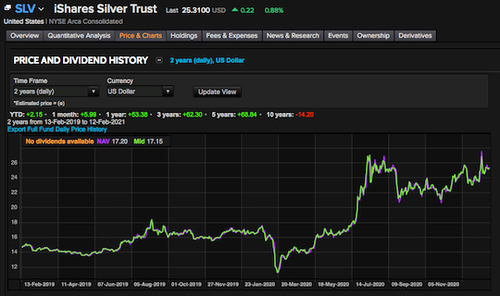 The other trend that stands out is silver’s dramatic rise from March 19, 2020, about the end of the pandemic stock market crash, to August 10, 2020, when U.S. interest rates began to turn higher.

Over those five months, silver rose from about $11.20 per ounce to $26.30 per ounce, a 135% gain constituting a big part of silver’s overall gains over the past several years.

Since August, silver has been in a consolidation pattern between $21.00 and $26.00 per ounce. The exception to this pattern is the one-day spike to $28.00 per ounce on February 1, 2021. (The figures shown on the chart are daily closing prices. Silver briefly touched $30.00 per ounce in COMEX futures trading on an intra-day basis).

The consolidation pattern is a revealing sign for investors because it means that silver is preparing to break out of this trend. Of course, breakouts can move in either direction.

But, given the shortage of physical silver, increased interest from professional investors and some residual interest from the Bros, it is much more likely that silver will breakout strongly to the upside.

An expected decline in U.S. intermediate-term interest rates is another positive for silver prices.