It’s Official: Nomura Is First Bank To Call For 2022 Recession

A little over two months ago – in early April – Deutsche Bank shocked Wall Street when it became the first bank to break with the mold of “cautious optimists” when it made a US recession its base case  (agreeing with our dire assessment from late 2021 that a recession was inevitable, if disagreeing with our timeline which put the recession smack in the middle of the second half of 2022, followed by more QE). Well,, since then things have only gone from bad to worse for the US economy, with the Citi US Eco surprise index plunging to pre-covid levels and multi-year lows… 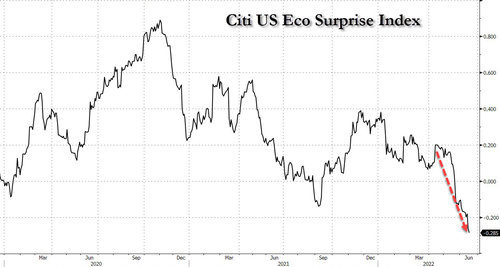 … while the Atlanta Fed GDPNow tracker for Q2 has collapsed to precisely 0.0%, implying that a technical recession is now virtually certain absent a dramatic improvement in the US economy in the remaining ten days of June, and Q2, which is very much unlikely since the slowdown in the US economy is only accelerating to the downside. 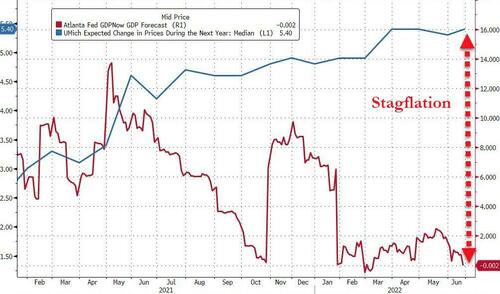 Amid this continued deterioration in US economic data, we said that the market’s jarring repricing lower was evidence that a recession had become the baseline, and we predicted that “every Wall Street bank would revise their GDP forecasts to contraction in the coming days.”

Today recession became the baseline. Expect every Wall Street bank to revise their GDP forecasts to contraction in the coming days

Sure enough, we were right once again because late on Sunday, Nomura became only the second bank to join DB in calling for a recession as its base case, and also became the first bank expecting this outcome to hit some time in the second half (unlike DB’s generously delayed forecast of a “late 2023” recession).

And once again echoing what we said back in December 2021, when we predicted that “the Fed is hiking rates into a recession”…

… Nomura warns that the “Fed’s commitment to restoring price stability will likely push the economy into a downturn.” I.e., Powell will hike the US right into a recession.

While there is a lot of useful data in the full note (available to premium ZH users in the usual place), we will excerpt some of the key highlights below:

Nomura then goes into a detailed review of all the various factor that have made a late-2022 recession inevitable. We excerpt from these below: 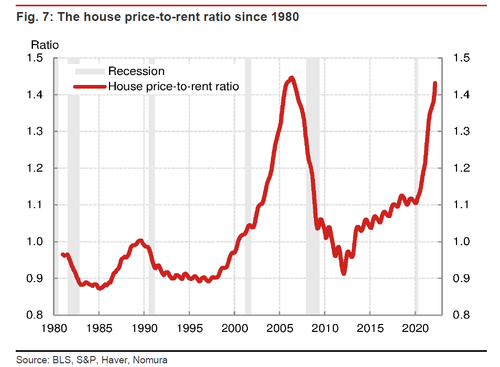 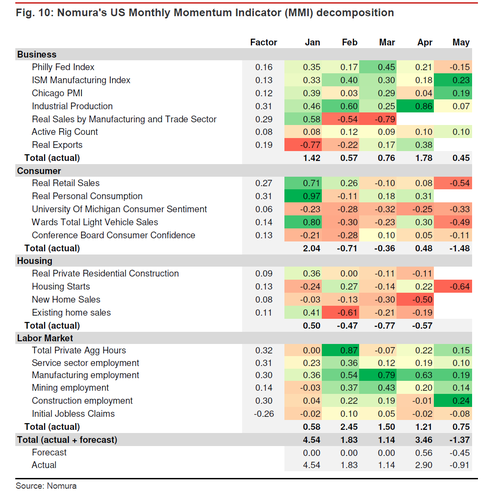 A challenge to bears is that while a recession is now assured, the Fed’s intervention to contain it will be delayed: here we agree with Nomura that “one of the most significant differences between our expectation for this recession and prior episodes involves the response from policymakers. In the current high-inflation environment, both monetary and fiscal policy are likely to be much more restrained in their response relative to previous recessions.” That is until everything comes crashing down in a global, synchronized recession. Here are some more details from Nomura:

The Fed’s hands are likely to be tied through 2022 by elevated inflation – Fed officials have been clear they will prioritize restoring price stability above all else. Unfortunately, we believe monthly core inflation is likely to remain quite elevated and above levels with which the Fed would be comfortable, at least through 2022, and likely into early 2023. As shown in Fig. 2 , the main driver of elevated trend inflation pressures continues to be owners’ equivalent rent (OER) inflation – one of the largest, and “stickiest,” inflation components. Due to BLS methodological differences and the lead-lag relationship with shelter prices and the economic cycle, Nomura does not expect OER inflation to meaningfully improve until early 2023. As a result, the Fed is likely to downshift to a 50bp rate hike in September, and 25bp per meeting thereafter before holding rates at an elevated rate. However, we do not expect any signs of potential easing from the FOMC, i.e., rate cuts or QE, in the near term.

Over the past decade and a half, the proximity of the Fed’s policy rate to the effective lower bound (ELB) has helped establish a standard “playbook” for responding to recessions, exemplified during the COVID crisis: cut rates swiftly and sharply to the ELB and prepare for large scale asset purchases (LSAPs, or QE), in order to provide additional accommodation.

However, Nomura believes that this playbook is likely to be of little use to policymakers in the current environment, due to persistently elevated inflation. We disagree: while Nomura expects rate cuts to start in H2 2023, they will likely come much later than they otherwise would have absent strong inflationary pressures, we believe that once the US is hit with the deflationary tsunami that is coming, prices will collapse much faster than most expect. Nomura fails to accept this and instead it predicts a pace of rate cuts which will likely to be slower than in previous recessions (Fig. 16 ), adding that “the Fed will continue to reduce the size of its balance sheet into 2023 considering its historically elevated size and their plans to tighten financial conditions beyond raising short-term rates. Both actions run against what policymakers would likely prefer to do in a standard recession.” Again, we disagree and expect a full-blown QE episode to be unveiled as soon as early 2023.

Where we do agree with Nomura is in the bank’s assessment that “fiscal policy support is likely to be absent, or outright restrictive”:

Similar to monetary policy, we believe fiscal policy will largely remain on the sidelines for the expected recession, aside from the regular impact of automatic stabilizers like unemployment insurance. Policymakers in Washington across the spectrum have increasingly taken the view that significant, and unprecedented, fiscal support during the pandemic helped exacerbate inflationary pressures. That experience, combined with widespread voter dissatisfaction due to inflation, will make many members of Congress reluctant to provide any kind of discretionary fiscal stimulus. One of the most striking indications of just how quickly the conversation in Washington has changed has been recent commentary from Biden administration officials on the potential for deficit reduction to help combat inflation. Treasury Secretary Yellen in particular has suggested deficit reduction could help address elevated inflation pressures.

Furthermore, as we have frequently noted…

Remember: after Dems lose Congress in November, there will be no more fiscal stimulus until Nov 24 at the earliest. That leaves the Fed https://t.co/Qx9Zly0gQC

… Nomura is certainly correct in predicting Congessional gridlock: “with our expectation of a return to divided government after the November 2022 midterm elections – we believe Republicans are likely to take back both the House and the Senate – Washington will likely return to gridlock. Republicans face few incentives to collaborate with the Biden administration with an important presidential election looming in 2024. Moreover, Republicans may be emboldened during debt limit and regular appropriations debates to push for outright spending cuts, which could exacerbate the recession in 2023.”

Here, we would predict that far from making monetary policy less likely, the fact that no fiscal stimulus is coming until at least 2025, means that the Fed’s liquidity firehose will be front and center as soon as late 2022/early 2023.

Putting it all together

Nomura expects a “modest” recession to start in Q4 2022, Combining the factors above; relative to previous downturns, the bank expects a shallower and longer path, for three reasons.

In terms of unemployment, Nomura expects nonfarm payroll employment growth to begin decelerating, but not as quickly as overall growth. Labor demand remains elevated and some firms may engage in labor hording during the initial stages of the downturn, resulting in weak productivity growth. NFP is likely to start declining in February 2023 under our base case. The unemployment rate will likely rise from an expected trough of 3.3% in the next few months to 3.5% by end-2022, 5.2% by end-2023 and 5.9% by end-2024. Our unemployment rate trajectory is less severe relative to the GFC, but slightly higher than 2001, reflecting less initial policy support (Fig. 19 ). 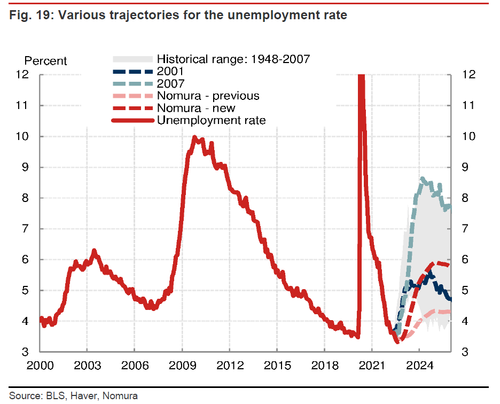 Finally, when looking at its update inflation outlook, Nomura writes that it expects Inflationary pressures remain strong and, due to a number of reasons, and thinks that the economic downturn may not exert substantial near-term disinflationary shocks, resulting in only modest revisions to its inflation forecast.

First, supply constrains will likely continue to help prices remain at elevated levels. To be sure, there have been some encouraging signs of inflationary imbalances easing in certain goods prices, such as home appliances and furniture, which motivates Nomura to lower its forecast for core goods prices modestly. However, vehicle prices, determined by complex supply chains, continued to increase, and it will take time to meet accumulated pent-up demand for vehicles, even if auto production picks up. As a result, Nomura expects core goods prices to continue to make a positive contribution to core PCE inflation on a y-o-y basis until mid-2023 (Fig. 20 ). 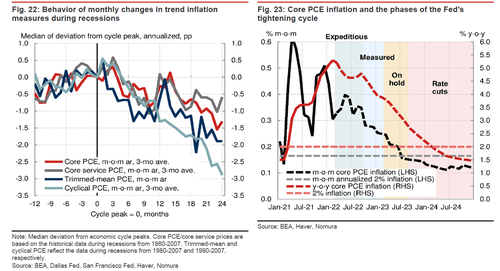 Of course, Nomura is just the first of many and now that the seal has been breached, we expect many more banks to not only make a recession their base case but to set the timing squarely into second half 2022 territory. What happens next, and predicting (correctly) how – and when – the Fed reacts to this recession will make some people very, very rich in the coming months.

There is much more in the full note available to professional subs in the usual place.