We now know the real purpose behind that media-manufactured ‘groundswell’ of support for JP Morgan CEO Jamie Dimon to run for president.

The longtime JPM CEO just received a “special award” in the form of an options package worth 1.5MM shares for agreeing to stay on at the helm of the bank – the bank which is not only the CEO, but also chairman of the board – for a “significant number of years,” according to the FT.

The news probably came as a disappointment to two of the bank’s highest-ranking female executives, Marianne Lake (one of its most visible executives) and Jennifer Piepszack, who helped the megabank earn a round of accolades from progressives after the bank signaled that one of them would likely be tapped to succeed Dimon when the time comes for his retirement following a reshuffle leaving them in control of the bank’s sprawling consumer business. Or if he has another heart attack (or cancer flare-up, God forbid). 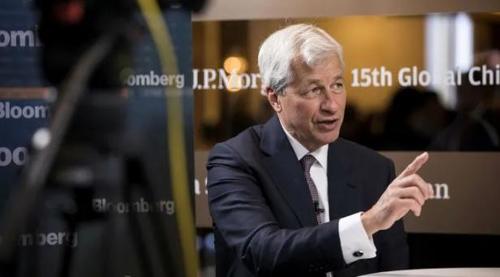 Per the FT, the board i awarding Dimon the options in the form of “stock appreciation rights” that he can exercise at Tuesday’s average price of $148.73, allowing him to make a profit if the bank’s stock rises above that level in the coming years. Megabank shares have risen substantially so far this year, though the outlook for bank performance is constrained by the Fed’s ultra-loose monetary policy. However, he won’t be able to exercise them any time soon: JPM’s internal models project that the options will yield a profit of about $49MM for Dimon after a 10-year vesting schedule.

A provision of the award allows the bank to claw back shares in the future should Dimon reneg on his end of the deal.

“In making the special award, the board considered the importance of Mr Dimon’s continuing, long-term stewardship of the firm, leadership continuity and management succession planning amidst a highly competitive landscape for executive leadership talent,” JPMorgan said in a regulatory filing.

The FT previously reported back in May that JPM wants Dimon to stay on for between 5 and 7 years, which would extend his reign into a third decade.

The options are being distributed on top of Dimon’s annual compensation, which amounted to $31.5MM for 2020, a staggering sum that ranked as the highest compensate among his peers atop America’s largest banking giants. Dimon then had the audacity to appear on ’60 Minutes’ and elsewhere in the media to discuss the threat of ‘income inequality’ to the cohesion of American society.